In the center of the old town of Pontevedra is the Basilica of Santa María la Mayor. This building is one of the most important and beloved buildings in Pontevedra since it is the maximum religious exponent of the city as it does not have any cathedral. It was built in the 16th century thanks to the help of archbishops of Santiago de Compostela and the support of several noble families. From its beginnings it was considered a Catholic church but in 1962, Pope John XXIII elevated it to a basilica.

It is considered one of the most beautiful Spanish temples of the 16th century and even called "the pearl of Galician art" for being one of the most outstanding works of the Galician architecture of the Renaissance. Its structure mixes the Gothic style with Portuguese Manueline elements and Renaissance decorative elements. Its main facade is one of the things that stand out most of it since it has an altarpiece shape with three abundantly decorated bodies. It also highlights its interior of the Renaissance style mostly, and the Main Chapel for its impressive altarpiece of the late nineteenth century in wood. 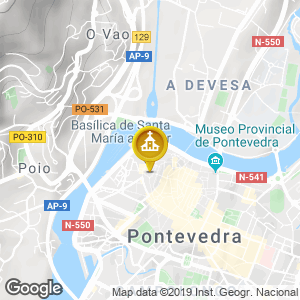