It was designed by the royal architect Enrique Egas, who also designed other important buildings such as the Royal Hospital of Granada in Granada or the Museum of Santa Cruz in Toledo. Its construction took place between the years 1501 and 1511, and its facade shows the Plateresque Gothic style, being next to the Carlo V door in Vivero, the only buildings in Galicia that have it. Inside there are four courtyards that form a Greek cross and that we can divide into two: those that still maintain the design of Enrique Egas and those that have a Baroque style. Also inside this historic building on the Camino de Santiago, we find the royal chapel, which has an ogival shape and was declared in 1912 as a Property of National Interest. 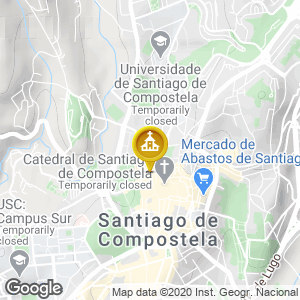