This step is a comfortable stage of achievable kilometres and a smooth layout. One of the few drawbacks faced by pilgrims is a need to cross, several times, the N-547 and without the aid of a pedestrian crossing. All of which occurs in the second half of the stage. On this step the pilgrims will pass through quiet forest tracks to encounter small linking villages and hamlets.

The distribution of the houses is such that in some sections it is difficult to know where one ends and the next begins. Most pilgrims prefer to spend night in Pedrouzo, an enclave with all amenities and located just stones throw from Santiago. Those who prefer to avoid the crowds have the possibility of staying in Santa Irene, close to Pedrouzo. Some pilgrims that depart from Arzúa choose to continue Monte do Gozo and sleep at the gates of Santiago in order to arrive on time and calmly to the pilgrim mass.

The exit from Arzúa (39 kilometres to Santiago) involves a downhill walk on stony terrain. On reaching a kind of rural roundabout the route takes a track on the left, now on a gravel path. The walkers leave behind La Fuente de los Franceses (the French Fountain), a reconstruction of the original one, according to the elderly residents of the area it is nothing like to the first. As Barrosas is reached quickly, an area, which as the name implies (Barro means mud), has a tendency to become muddy when it rains resulting in very soft terrain. Here walkers will find the chapel of San Lázaro, and the foot of the Camino, a monument in honour of the priest Ramón Pazos Seaje, Moncho.

On the ascent, the pilgrims come to a junction dominated by a yellow house. A milestone indicates that the way forward is to the left. Along a track through a forest the walkers reach O Raido, another very humid area. After a short climb the terrain returns to asphalt and takes the hikers to the hamlet of Preguntoño, where they will find the church of San Paio. The pilgrims cross the national road via a tunnel.

The meadows, full of cows, dominate the landscape until arriving in Peroxa, the point from where the hikers begin a new descent to the stream of Ladrón. After leaving behind a plaque in memory of the pilgrim Miguel Rios, and after crossing a small stretch on pebbles, now on ascent, the Camino arrives at a junction with an asphalt road. The route continues ahead, but those pilgrims who plan to stay in the hostel should turn left. On an earthy track, also with a tendency to become muddy, they reach Taberna Vella. Calzada is the final centre in the parish of Burres. From here the Camino says goodbye to Arzúa and enters O Pino, the last council before arriving to Santiago. 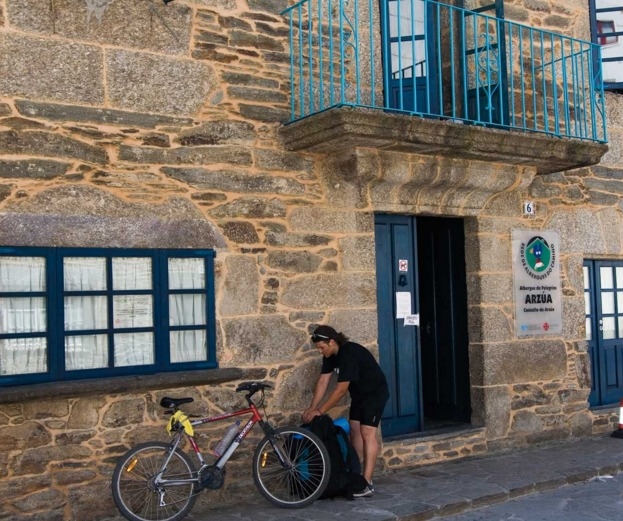 Casa Calzada, with a stunning terrace, offers rest to the pilgrims. Continuing along quiet forest tracks, the pilgrims reach a tiny hamlet on the route, on solid terrain. This place, during the summer, has a bar. The scenery does not change much and the pilgrims continue along comfortable forest tracks, leaving only for short stretches on quiet local roads that coincide with the Camino. A milestone with the name Boavista announces the arrival to a small village with houses scattered. At this point the terrain is likely to become muddy in times of rain.

Until now the Camino has remained distant from the N-547, the main link between Santiago and Arzúa. The pilgrims only had to cross it at the exit from Preguntoño via a comfortable tunnel. From Salceda (9 kilometres to Pedrouzo) the story changes and the serpent like route follows the road very closely. The albergue of Salceda can be found through taking a diversion to the left. On reaching the main road there is a narrow parallel path that passes in front of bar with a terrace. Soon the route moves away from the asphalt (a few meters ahead, there is a chemist and the Meson A Esquipa).

On a slight climb, where walkers will find a plaque in tribute to the pilgrim William Watt, they reach O Xen, the next centre, also very small and with dispersed housing. At this point it is essential to re-cross the road and quite dangerously. The pilgrims reach Ras, another small Hamlet. In Brea, on the left side of the road, there is a yellow building that opens as a guesthouse and a cafe-bar. Rabiña is left behind, and after crossing the N-547 again and comes to a slight slope to reach O Empalme. Before this the pilgrims leave behind a humble picnic area, with a broken fountain and a striking mill, reminiscent of Wild West movies.

At the top the pilgrims will find the restaurant O Cenadoiro restaurant, the pizzeria O Empalme and the café-bar Andaina, which on its terrace retains a giant statue of the legendary Pelegrin, the official Jacobean mascot. Here the hikers should cross the road to follow the route. It is a dangerous spot, as it coincides with a dip in the road making it impossible for pedestrians to see the cars, and for the cars to see the pedestrians. Extreme caution should be taken. From O Empalme the way descends through a track surrounded by eucalyptus, after another tunnel under the N-547, arrives at the chapel of Santa Irene. In Santa Irene (3 kilometres to Pedrouzo) there is a private albergue on one side of the road, and at the other a second one owned by the council.

A brief descent through a eucalyptus forest takes the walkers to A Rua (1.5 kilometres to Pedrouzo), a charming enclave of stone houses. Its name derives from the linear composition of its main street. Here the pilgrims will find recommended services and the tourist office of the council. On a tarmac the road the Camino once again, leads the pilgrims to the main road and should be followed by those wishing to spend the night in Pedrouzo, given that the pilgrimage route borders this centre in the council of O Pino.

Generally a very comfortable stage the only drawbacks may be mud, as some areas are on very soft terrain and after periods of rain can become waterlogged, also crossing the road N-547, a difficulty repeated many times and rarely safely due to poor visibility. 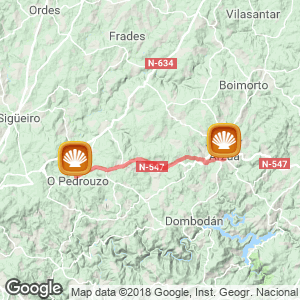