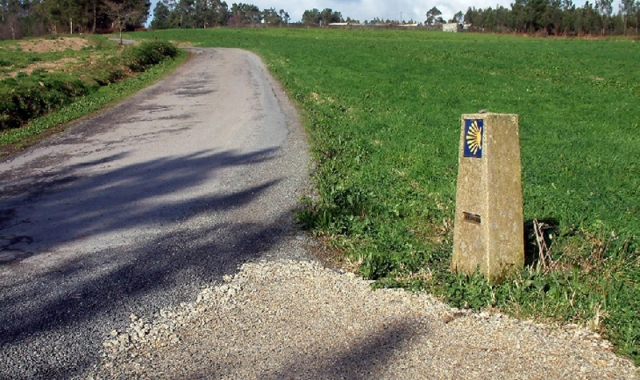 The Ecuador of the English Way. The third stage of the route passes through the towns of Betanzos, Mesía and Abegondo. A day as hard, or harder than yesterday. Especially given its length and the steep slopes of its last third of this step. The pilgrim is facing more than 30 kilometers away from urban town centres and with few services on route.

Caressing the terrain of As Mariñas, through areas of chestnut trees, along forest trails and fresh avenues shaded by pine, oak and the non-native eucalyptus trees. Each step moves inland, away from the coast of Coruña, to reach Bruma, the highest altitude point of the Camino at almost 500 meters above sea level.

It is highly recommendable to leave Betanzos well supplied with food and drink, as you hardly pass a single bar in the whole stretch. If the sun is beating down, skin protection will be essential in hikers backpack because there are areas of the route and clearings in which they will be very exposed to the sun. The day already started with a steep climb to leave behind the capital of Betanzos, a prediction of  what the final kilometers of the stage will entail.

Surrounded by the rivers Mendo and Mandeo, the pilgrim resumes the Camino in the capital of the region of As Mariñas. Betanzos, the old province of Galicia, is heritage, tradition and culture, makes the city a must-see. The centre is seeing as the starting point, more precisely at the foot of the statue of the brothers García Naveira, in the square of the same name, although popularly known as O Campo where they celebrate a traditional fair.

The walker is surrounded by porched properties, the Convent of Santo Domingo (XVI century), the neoclassical building of the Arquivo do Reino de Galicia (houses the Tourist Office) and the Public Library, formerly an Orphan School. The fountain of Diana de Versalles, cast in Paris, and the only legacy of modernism, the town’s music stage. Now on the move, thru Rúa do Rollo street, signed with scallops shells on the pavement until you reach a hump that initiates a descent to the old bridge of As Cascas, first mentioned in documents dating back to 1200s. Bombed by the English in 1809 in their advance towards A Coruña, the bridge had to be rebuilt.

You cross the road and continue with a left turn, when you will begin a tough ascent that moves away from the town of Betanzos, a short distance from here, there is a bike shop Ciqlo, 0034881986176. In this stretch, the best guide is to follow the yellow arrows painted on the road. In the middle of the slope there is a huge concrete wall, where you turn right to continue the climb. Near the end of the climb, the silhouette of a metallic pilgrim points its arm to the pilgrimage route, towards Couto. Now on the purely rural path you go over the railway line Betanzos-Infesta via the bridge Campoeiro. You deviate to a new overpass this time over the A-6 which, once crossed, you begin with a right turn down a slope until you reach a group of houses in Xanrozo. The whole route described until here is generally well signposted and runs through asphalt roads. On the contrary the entrance to Abegondo (23 kilometres to Bruma / 64 to Santiago) via Limiñón is not well signposted.

If you need supplies at this point, when you reach a crossroads in front of a football field is a bar about 200 metres on the left. Following the route at the point of the mentioned football pitch (on the left of the road) the ground then turns to an earthy track that leads down to Limiñón bridge. Above the river that flows to the reservoir Abegondo-Cecebre. The CP-105 road, again on asphalt, leads to Cos.

Just at the point of the sign indicating this town, you turn left for a road between meadows, parallel to the river, and that leads to the church and cemetery of San Esteban de Cos. Leaving behind the sanctuary and a small group of houses, the route goes into a wooded area that evokes the “Bosque Animado” (“The living forest” famous book by Wenceslao Fernández Flórez), set in neighbouring Fraga de Cecebre.

There are just a few hundred meters to pass over a small stream-to reach the place of Meangos, curiously curiosly signposted on a car license plate at the foot of a milestone indicative of Compostela. From there, in the old village of Cima de Vila, the route begins to get complicated for the pilgrim. At this point they have covered a third of the stage. Taking a path to the left, on the route of the old Camino. Beginning on grass, but a few meters ahead becomes a muddy, narrow passage that connects with a forest track about one kilometer long. After a variable stretch on the road you reach Presedo. With the next change that alternates between stretches of good ground and earthy paths. Along this path you reach the church and parish of Leiro (14 kilometres to Bruma / 55 to Santiago). On the right side of the temple there is a covered area with benches, barbecues and taps (working). 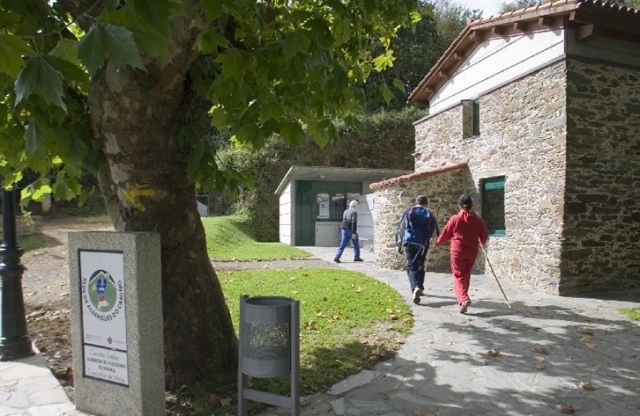 The church in honor of Santa Eulalia XVIII century is surrounded by the cemetery. It is a good area to stop and regain strength. With revitalized legs and determined to complete the second half of the stage, you return to the path towards Francos along a small group of houses of Matiño. Then a stretch between mountains, very muddy and without steep slopes, it leads back to the county road, which is abandoned a little further along to join a path that runs parallel to the river. Much attention should be paid on this narrow passage that follows the river, because there comes a point at which the yellow arrows disappear from the path.

The pilgrim will be presented with a fork in the path, here you should turn right moving away from the river course via a small slope following the blue markings painted on the trees to reach the road, in Vilacoba (11 kilometres to Bruma). Here you will find just one bar without deviating from the itinerary: Casa Julia (meals on request, 0034981 630 242), also known as Pequeñita, a gastronomic reference on the English Way. It is the last haven before the grueling climb to Vizoño.

The climb begins at the foot of an old and abandoned chapel of San Paio and the nearby Church of Santo Tomé. After the first slope you pass in front of a small recreational area of Vizoño (7 kilometres to Bruma) is a good place to rest as it is equipped with tables and benches under beautiful oak trees. It also has a fountain, although the water is not recommended for consumption. Still climbing, you pass nexto to an isolated stone cross belonging to the church of Vizoño .

The journey continues combining paved roads with dirt roads until you cross the bridge over the motorway AP-9, towards Malata, an agricultural area where you will find numerous farms dedicated to raising pigs and minks. Finally on flat ground, although without trees or cover to provide shelter from the rain or sun you will see the TV antennas in Meson do Vento, a town near the hostel Bruma where you have access to services such as taxis, restaurants, taverns, acommodation, banks, pharmacies, grocery stores or clothing and shoe shops.

Continuing on wide roads, and farms tracks you finally reach the hostel Bruma (26 kilometres to Sigüeiro / 42 to Santiago), the council of Mesía, and where the English Way from the port of Ferrol and La Coruña join. There are still remains of the old medieval pilgrims hospital, adjoining the old chapel of San Lorenzo, still standing. According to studies on the origin of the old building, “there is no doubt” about its age because it was donated by Pedro Martínez and his wife Urraca Rodríguez to the hospital of Santiago "de omni portione nostra ipsius hospitales de Gruma " , in 1175. Also known as "Gruma Hospital" by Father Sarmiento six centuries later.

The centre has no services except for the hostel, however, in establishments in Mesón do Vento will deliver lunches and dinners to pilgrims as is also the case of Mesón La Ruta, also with taxis services (0034981 692 754). 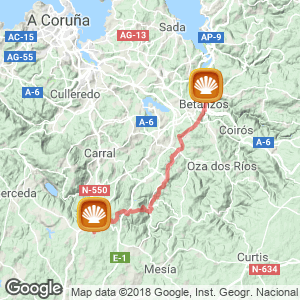