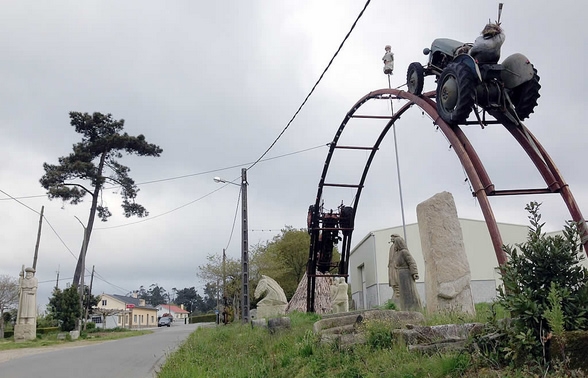 The penultimate stage of the Camino Ingles, the second if you started in A Coruña. This is one of the most bearable, the nature of the itinaray and the fact that the route runs close to an abundance of hotel services that facilitate provisioning. The proximity of the capital of Santiago (42 kilometers); the lack of Monumental references and the ease of the stretch make the journey towards Sigüeiro a swift one. Now in the municipality of Oroso, just outside the doors of Santiago.

The roads of asphalt and earth alternate almost evenly during the journey, practically devoid of muddy areas or difficult passes, except for a stretch of small rivers that increase exponentially in the rain. In addition, a slight slope favourably accompanies the pilgrim until the end of the stage. Yes should bear in mind that Sigüeiro, on the banks of the river Tambre, does not have hostels or any public areas to help walkers, consequently if you wish to stay overnight it is necessary to use hotel accommodation.

If you stayed overnight in the neighbouring town of Meson do Vento, you will have to go back a few steps, about two kilometers, to rejoin the Jacobean itinerary. However, the pilgrims that stayed in the public hostel of Bruma (Mesia) wake up already at the foot of the camino, on the road that leads to Seixo. For breakfast or to buy provisions, about 500 meters from the hostel there is a turnoff to the right which takes you to the aforementioned Meson do Vento, a town belonging to the council of Ordes.

The Camino de Santiago reaches the last council in the parish of Ardemil (23 kilometers to Sigüeiro / 39 to Santiago), continuing a road with hardly any curves until reaching Cabeza de Lobo and the church of San Pedro, surrounded by the cemetery. A few meters ahead, in the hamlet of Cruz, the pilgrim encounters the bar Porto, first on the itinerary, and some eye catching stone statues, next to a metal arch that supports two tractors, art of a very mixed genre created by the neighborhood association.

Ardemil is left behind on a earthy road (right) after having passed through Carreira, Mámoas and Carballeira. The forest trail, easily accessible, includes several crossings that should be ignored until reaching the third on the left, passing in front of a stone cross. Despite continuous junctions, it is a well signposted stretch, with no danger of getting lost. 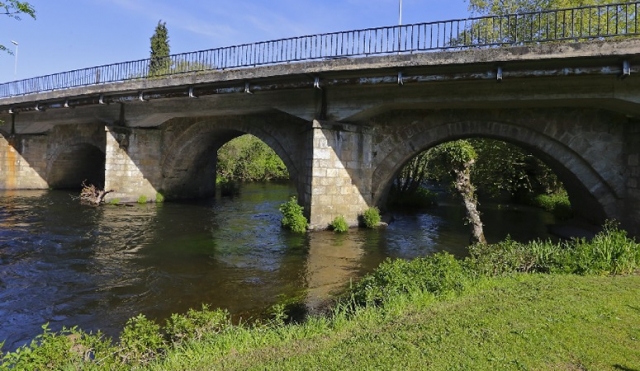 The path leads to A Rua, where you will find two bars (Café Bar Novo and Bar A Rua) and the rural house Dona Maria, and establishments that surround the parish church of San Paio de Buscas (19 kilometers to Sigüeiro).The temple retains the majority of its primative Romanesque style late XII century, however it was renovated in the mid-Baroque era in the XVIII century. Inside it has an altarpiece with the figure of San Paio, to which devotees flock to implore healing. The path departs from the main road further ahead to an earthy path (left) to reach the mill of Trabe and the bridge O Cube. From here the route has a peculiarity that at every crossroad on the path you encounter a cobblestone area  that marks the way forward, in addition to the milestones and the usual yellow arrows. Immediately you reach a tunnel about 20 meters below the AC-224 road.

Now in the place of Outerio de Abaixo where you find the rural house, Casa rural Antón Veiras, where you can treat yourself to a full meal for about 25 euros. In Outeiro de Arriba-the next place- you leave on the right a trail that will need to take to visit the Romanesque church of San Xiao Poulo.

The pilgrim then travels along Senra and Calle (14 kilometers to Sigüeiro), where they encounter the chapel of Our Lady of Mercy (Nuestra Señora de la Merced) and a humble XVI century house where a plaque commemorates the passing of Felipe II in 1554, consequently known as Casa de Felipe II. In the center you find the bar O Cruzeiro, the last establishment until the end of the stage.   The same road leads to Carballo and a few meters ahead,on a dirt track that you take to the left, you reach Casanova de Pereiro Casanova.

The traveler will see a solitary tree at a fork in the route. The correct path is to the left. That stretch is in the area of fountains so it is not surprising that the route can become tricky due to excess water on the tracks. In this case, it is recommended that you take the path on the other side of the river.

The next reference point is the Bridge of Pereira, its exact origin is unknown (medieval or Roman). Once crossed you arrive in Carrás place, another area with an abundance of water on the ground. With the houses of Baxoia, the camino enters the council of Oroso. These are the last kilometers of the day and run along wide tracks of consolidated farm land and wavy slopes.

After the stretch of earthy land, you return to asphalt to enter in Sigüeiro via an industrial estate. At the center of the medieval town (XII century) you come to a green area that leads to Calle Real and the bridge over the river Tambre the natural border with the Council of Santiago de Compostela (16 km).

Sigüeiro, the capital municipality of Oroso, lacks public accommodation for pilgrims. However, it is a town with all other amenities. 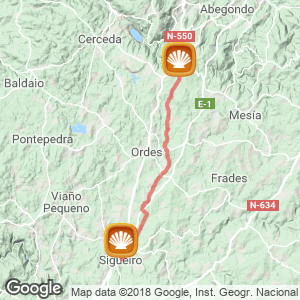