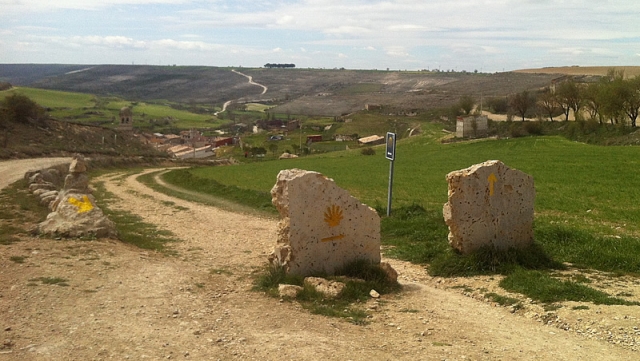 In this long stage, which many pilgrims shorten with a stop in Hornollos del Camino, the main difficulty faced by pilgrims is the weather. In the summer a complete absence of shade forces walkers to have to get up early to protect themselves from the relentless sun. In winter, on the contrary, the low temperatures of the plateau make it difficult to get warm, even after walking for 30 kilometres.

The day begins with a beautiful farewell to Burgos and several puzzling under and overpasses with the surrounding roads. From Tardajos, the next location with services, the route moves along depopulated paths that lead the walker to discover medieval villages and hostels with individual characteristics and recovered Jacobean traditions. In Rabé de las Calzadas walkers will embark on, without remedy, the difficult and arid plateau.

Continuing the Camino in solitude with only their shadow for company (and, fortunately, the dozens of pilgrims who will join them on that day). In all locations passed they will find services to quench their thirst. Even so, and despite the existence of fountains, it is worth replenishing before facing the sections Rabe-Hornillos and Hornillos-Hontanas.

The exit from Burgos (491 kilometres to Santiago), much nicer than its entrance, is covered quickly along an enjoyable walk, allowing the pilgrim to discover Jacobean evocations and trace the ancient footprints of this pilgrimage. The starting point can be from Calle Fernán González, which leads to one of the most splendid views of the cathedral. In front of the gates of Coronería, a Gothic gem they will also find the Palace of Castilfalé, a branch of the Municipal Archives. Nearby stands the Church of San Nicholás de Bari, Gothic in style, much like the Arco de Fernán González, a triumphal monument dating from 1580, it stands in the same place that was also the residence of the first count of Castilla. Before leaving Burgos, hikers will walk past a monument erected in honour of the Cid - "Solar del Cid" - where, according to tradition, was once the ancestral home of Rodrigo Diaz de Vivar.

The Camino leaves the old walled city by the Moorish arch of San Martín and passes through the streets of Emperador and Villalón that lead down to the bridge of Malatos (lepers), which crosses the river Arlanzón, also the area where the majority of hospitals for pilgrims were situated. The importance of Burgos on the pilgrimage is reflected in the fact that it once had 30 pilgrim hostels. It was also so highly influenced by the route that even today the urban layout of the city retains the exact historic Camino. Through the shaded park of Parral the pilgrim reaches the chapel of San Amaro and the hospital del Rey, nowadays the building belongs to the University of Burgos but it was once one of the most prominent hospitals on the Camino of Santiago.

Founded by King Alfonso VIII in favour of the pilgrims, and notable for its plateresque style pilgrim door that gives access to the main courtyard dominated by an image of the Apostle. After a brisk stroll along a path that runs parallel to the N-120, the hikers pass under the railway line and continue straight until reaching a roundabout, which is crossed to continue, now on the right side they will pass a cycle lane situated in front of two university faculties. From here they reach a deviation path to the right signposted "Los Guindales". After taking it and continuing down Calle Benito Pérez Galdós they will arrive at a garden centre, from here the route say goodbye to the asphalt and continues ahead on a track.

First stop, Tardajos After this interval, the pilgrims pass in front of a small chapel and a playground with a fountain and come to a roundabout, here they should turn right and, a few meters later, head left along a path that nears Villalbilla, a town not located on the route itself but that may be of help to exhausted walkers. In the centre they will find, a bakery, a chemist and a cash machine, also, a restaurant, two hostels and pension (guest house). But, as anticipated, the route does not lead directly to this enclave.

The pilgrim Camino leads to a tunnel and crosses the AVE railroad (High Speed trains) to immediately afterwards turn left and continue along the track that leads to an overpass for the ring road. The walker completes this stretch and, at the next junction, turns left to continue along a path that runs parallel to the motorway. Soon after, they will pass below the viaduct Arlanzón, leaving the river on the right. After a slight ascent during which the track turns to gravel, they reach a dangerous junction with the N-120. Although signposted, it has no pedestrian crossing.

The walker crosses the river on asphalt-along a bridge known as Puente del Arzobiso-and continues parallel to the national road on its left margin. Advancing a kilometre, the route moves away from the road until reaching the first stop of the day, Tardajos (21.3 kilometres to Tradajos). This town of Roman origin, built on an ancient road, welcomes travellers with an elegant cross from the XVIII century. In the Middle Ages it had a hospital for pilgrims, currently it offers a variety of services to the pilgrims, such as a chemist, grocery shop, a fountain, ATMs, a bank, bars, a hostel and a guesthouse with a restaurant.

The road, well signposted, enters the town by its main Street, Calle Mayor. It crosses through the centre and departs passing under a large pylon. Again on asphalt and without a pavement, a sign advises pilgrims to travel on the left hand side of the road. They then reach a bridge over the river Urbel, a restless and unstable river known for flooding the surrounding land. This fact is the basis for the popular saying often repeated in the area: "From Rabe (next village) to Tardajos, no shortage of jobs. From Tardajos to Rabe, God help us ".

The rapid passage, which runs between fields and a row of poplars, converts the two kilometres that distances both towns to a peaceful journey. Soon walkers will discover Rabé (18.9 kilometres to Hontanas), a small village known as - "De las Calzadas” (Roadways) – named so because of the Roman roads that crossed through the town, including Via Quinta that links the towns of Clunia and Sahagún.

Numerous studies claim that the Roman city of Deobrígula (City of Gods) was located here. This centre, which in medieval times had a castle, is accessed along Rua de Santa Marina and leads towards the square, Plaza Francisco Riberas. It is here, at this point, where the pilgrims will find one of the most authentic hostels on the Camino, it still maintains the traditional and contagious spirit of hospitality.

Felix from Burgos and Michèlle from France, veteran pilgrims, receive each day eight pilgrims, who they treat with care, both personal and care for the most common problems (such as tendinitis or blisters). Within this shelter (Santa Marina y Santiago), they will also find an authentic Museum of the Camino, which includes multiple souvenirs from their own Jacobean experiences. Below high ceilings they keep figures, maps of the various routes, shells, arrows and successive images. It is in this room where they also conduct a mass for pilgrims. This couple, who came to know Elías Valiña-great supporter of the recuperation of Jacobean route in Galicia and promoter of the yellow signs that guide it, he did not hesitate to help with the 90 signs on the Ebro Camino from Zaragoza to Logroño, as well as several of the crosses on the route of Burgos. 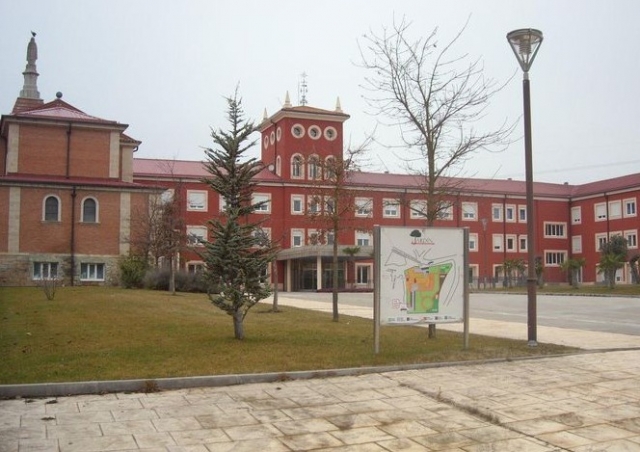 Hornillos recover the tradition After a stop in the square, where they will encounter a number of services offered by the enclave, such as another private hostel, the route continues along Calle Baldomero Pampliega and says goodbye to this centre after leaving on the left a cemetery and the chapel of Our Lady of the Monastery. Immediately after they will face the arid Castilian plateau. From now on the walkers begin the difficult journey across the lonely moors that characterize the landscape of this region. In summer, under a relentless sun, surrounded only cereal crops. After departing from Rabé the route meets a rural path and starts a gentle climb.

Three kilometres later pilgrims can quench their thirst at the fountain, fuente de Praotorre, which also has a resting area. Having reached the highest point of the moor, which is advanced over some distance, they suddenly begin a sharp descent down the Hill of Matamulos, to the valley and river Hormazuelas, where they can appreciate the elongated village of Hornillos del Camino (12,1 kilometres to Hontanas).

On asphalt, and after taking a diversion to the right where they will see a signpost for the town, and a sign encouraging pedestrians to continue on the left side of the road. They cross a bridge and come to this new location, a clear example of a village-road which was once home to several hospitals for pilgrims, of which today only Santo Espíritu (Holy Spirit) remains. The name of the village comes from Forniellos, meaning small ovens, an enclave dedicated to making pottery and plaster.

This location has a special place within the modern pilgrimage. It was here, in 1990 that a new page was written about voluntary hospitality on the pilgrimage. Catalan born Lourdes Lluch, having completed the route, wanted to give something back to the Camino, something that had received along his own Jacobean experience, a warm and welcoming style of care. Therefore he did not hesitate in dedicating his holidays to serving and giving aid to the pilgrims. He rented a house in Hornillos and, unwittingly re-launched a custom of old, that of engaging and welcoming pilgrims.

This initiative became known in various Jacobean publications and encouraged other veteran pilgrims to devote some of their free time to working in shelters along the Camino. This movement, increasingly popular, is coordinated through the federations and associations of friends of the Camino. San Bol, before Hontanas In this long step with 10km still to go, it is advisable to make progressive stops.

The road from Hornillos resembles previous ones, with rough sections and in solitude apart from their own shadow. Only the successive hills of stone escort the route. The rocky edges of the slopes encourage and energize this arid plateau. After over 5 kilometres walking and a slight climb and subsequent descent walkers reach a junction from which they will see San Bol, another small enclave that is not strictly on the Camino route but which might be of help to some thirsty or hungry travellers.

The centre, which is reached after deviating to the left and walking about 250 meters, has a public Hostel and a fountain. It was once a typical Jacobean enclave that belonged to the Order of San Antón. The Camino, however, advances in front and goes up a very rocky trail, which can be complicated for cyclists.

They cross a road without a pedestrian crossing and quickly reach softer ground with the sole aim of arriving to Hontanas. This village, remains hidden in the valley until the last moment, it is reached after covering a simple but narrow descent that leads to the main street, full of facilities. All that remains to do now is stop and rest.

This day should not be a major problem for cyclists. At the exit from Burgos cyclists even have, in some sections, cycle lanes. The most complicated paths are towards the last part of the stage, the kilometres preceding Hontanas, where the route passes through very rocky terrain. 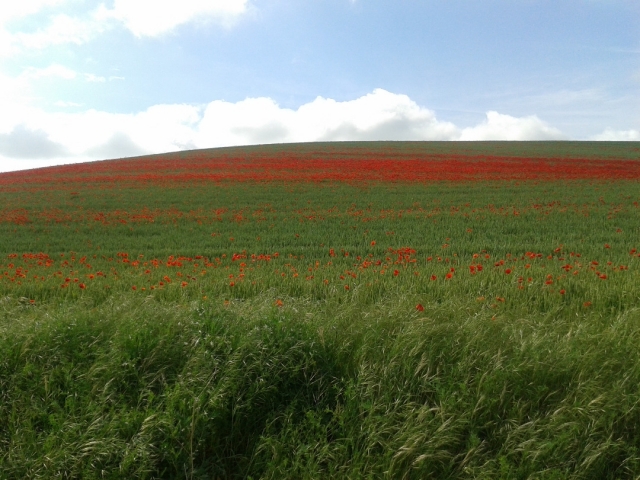 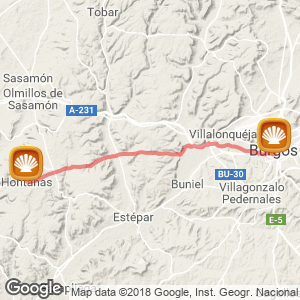