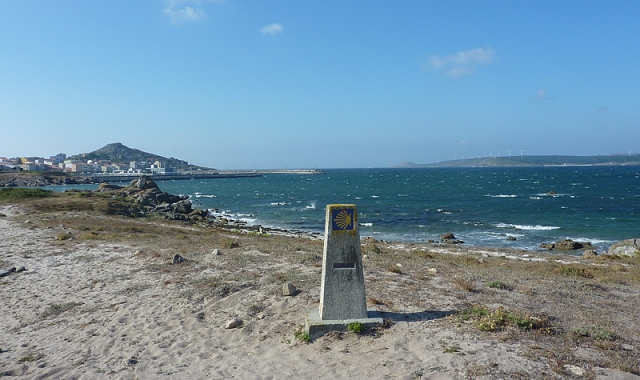 After passing through the small and charming centre of Olveiroa and leaving behind the guesthouse-restaurant of As Pías pilgrims begin along an asphalt path that abandons the village, heads towards the reservoir of Castrelo and climbs mount Sino. Pilgrims should not be concerned about a lack of Camino signs for two kilometres. In Logoso, an albergue with a bar receives walkers and this establishment serves breakfast from 06.00 hours and offers menus at 9 euros. 200 metres from the pilgrim route the restaurant A Pedra, with breakfast and a menu of the day at the same price, can also be found. Afterwards walkers reach the location of Hospital.  The junction to Finisterre or Muxía At the exit from Hospital the route connects with the DP-3404 road. Leaving on the left hand side the bar O Casteliño, with breakfast and sandwiches. Pilgrims then cross the road and shorten the journey a little by taking the old road. On continuing they will reach a roundabout where there are turn offs for the routes that lead to Muxía (right) and Finisterre (left).

Some milestones indicate the direction of the Camino. In this case hikers should continue to the right, towards Muxía with the immediate objective of reaching Dumbría, located four kilometres away. In Dumbría the Way continues ahead, on the road that passes through the village and arrives at a junction, here various services are located, such as, bars, supermarkets and cash machines. On this urban journey many of the Jacobean signs are situated on the walls of the houses. The journey crosses the river Fragoso and a little later arrives at one of the most dangerous junctions of the day. Quickly, and with extreme caution, pilgrims must cross the AC-552 and continue ahead towards Pena do Covo. Later to Trasufe, Senande, (with the bar A Coxo which serves breakfast from 08:00 hours as well as a variety of tapas, snacks and, after a curve in the road there is an additional shop) and, Quintáns, a popular stopping place with services for pilgrims, such as, shops, bars and a chemist. A sign allows pilgrims to count down the milestones still to be passed before reaching Muxía (22); a location still situated 11,5 kilometres from here. Sleep in a raised granary or a monastery Firstly on asphalt and later on soil Pedregás is reached, where there is a stone cross and a solitary stone house, the only one in the area. In san Martiño de Ozón walkers will find on of the longest granaries in Galicia. After successive ascents, Merexo is reached, from which there are enviable views over the coast of Camariñas. Moraime, the best art in the region The route then passes through Os Muiños, Moraime and the river Negro. Four kilometres still remain to reach Muxía.

The route deviates to the right, in the direction of the beach of Os Muiños. After the monastery of San Xiao, in Casasnovas, walkers pass in front of a beautiful area with a fountain and a washing area, here in the summer tired pilgrims can refresh themselves in its cool water, from here and on asphalt they cover an uphill stretch (7% gradient). Later hikers arrive in Chorente, the village prior to Muxía. On continuing walkers begin a descent on a path, which, during the winter may become muddy. A red arrow directs pilgrims to the left to the beautiful beach of Espiñeirido, now in Muxía. A milestone situated next to the dunes signals the costal goal of this Camino of Santiago. On very windy days recommendations are to continue the Camino on the left hand side pavement to avoid the likely hood of loose sand from the dunes of the beach causing problems for hikers.

The Camino passes the turn off that leads to the albergue and continues along the coast to the port.  A sign leads walkers to the left, towards the tourist office and the pilgrim information point; here travellers can collect the Muxiana, the document accredited to those who have completed the route from Santiago to this location. There only remains the final highlight of the stage. The church of Santa María, a beautiful and small temple situated on some rocks. Towards the sanctuary of Barca On the same path, or on the road that borders the coast and allows walkers to see the traditional dryers of conger eels, pilgrims approach the final milestone of the journey, the Sanctuary of Barca, an authentic stone monument at open sea and which, alongside Finisterre, has been converted into another goal from which travellers can enjoy the sunset from the rocks. Close to here A Vela is situated, also known as Pedra dos Cadrís, allegedly the location of the petrified sail of the divine boat. The faithful are supposed to pass below it nine times in order to cure back pain. Next to it there is also O Timón, (the helm), the third piece of the boat of the Virgin conserved in stone. A guarantee to female fertility, for maximum effectiveness tradition recommends that intercourse should take place on the rock. 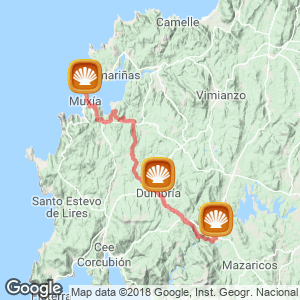