A comfortable stage, involving a journey through fabulous vineyards, and beautiful, tranquil locations benefited from being full of services. In Pieros, the pilgrims of the Camino de Santiago face with two options to access Villafranca. The Camino inevitably approaches Galicia. This is unquestionable and noticeable by the landscape, place names and of course the people.

In Ponferrada, after the obligatory visit to the splendid Templar castle, which shadows over the enclave, leaving the city presents some complications. The Camino of Santiago takes a detour along wide avenues, although each and every one of the crossroads is well signposted. On arriving to Plaza Virgen de la Encina the pilgrims have to descend a slope on the left, now in search of Sil. On the other side of the riverbank the long streets begin. At number 46 Liberty Avenue the National Energy Museum is situated.   The National Energy Museum is located at an old power station. Inside, among other things, visitors are shown how electricity is produced by coal. Admission is free. Already in the neighbourhood of Compostilla, on arriving at a new roundabout the walkers should turn left, following the signs. They will come to a straight road marked by trees where they will find a Red Cross building. At the end of it there is a park in which Bar Lois is situated. They should continue to then pass through a tunnel in which the graffiti will guide the way.   It owes its name to Santiago of Compostela. The beautiful church, escorted by two wonderful plums trees, was built in the XX century to offset the loss of an old chapel destroyed by the French during the War of Independence.

The vast majority of houses in Compostilla, a neighbourhood of Ponferrada, were constructed by a company called Endesa to facilitate the settlement of workers to the ex power station.   A little further ahead is the Hotel Novo, which offers special rates to pilgrims. It has a bar and restaurant. Through an area of building work the walkers reach, by means of a tunnel that crosses the A-6, Columbrianos.   The first settlements in Columbrianos date back to the Bronze Age, the remains of this pre-Roman circular, fortified enclave are evidence of this. This hamlet of Ponferrada survives, predominantly on agriculture.   On a tarmac track walkers leave on the left hand side the cemetery before arriving at the Church of San Esteban, built in the second half of the XVIII century, although it was struck by lightning and consequently its belfry was recently restored. Now in descent on the asphalt the walkers come to a main road. At this point they should cross at the pedestrian crossing and enter the heart of the village. Columbrianos has a chemist, a health centre, a Red Cross station, a grocery store, a bakery, a rural tourism house (El Almendro de María), a drinking fountain, a drinks vending machine, a bar and a restaurant. Next to the bakery there is a sculpture by a local artist dedicated to the women who worked the agricultural fields of León. A little later, and now at the other side of the road, the Camino of Santiago passes in front of the chapel of San Blas and San Roque, decorated at the back with an illustration of the saint dressed as a pilgrim.

The grapevines of Camponaraya Soon, the Camino of Santiago returns to embrace the countryside. A narrow track transports pilgrims to Fuentes Nuevas, another small town in the municipality of Ponferrada, difficult to believe but even more rural than the last. On entering Fuentes Nuevas there is a picnic area at the foot of a cross. For those who have not yet had the opportunity to have breakfast, the bar la Ermita (the Chapel), right next door to the chapel of Santo Cristo, usually offers food early in the day. Another good choice is Taberna Mateo, with an inviting terrace. In the latter it is possible to purchase fruit. In Fuentes Nuevas pilgrims will also encounter the restaurant La Casona. At the exit of the village is the church of Our Lady, within its tower is there is a storks nest, birds in this area find ideal climatic conditions for their needs. For those who are thirsty, just inside the grounds there is a drinking tap on the right. A narrow straight path on asphalt leads the walkers through working fields to Camponaraya. Camponaraya Now at the exit of the centre the pilgrims come to a new roundabout. With caution, they should situate themselves on its left margin. From here they pass in front of a sculpture dedicated to wine, with Jacobean motifs at its base, owned by the vineyard Viñas del Bierzo.

This company has a site where visitors can taste the wines, the fruit of the land, accompanied by a tapa. The Camino passes a small picnic area with shade and a drinking fountain. After a small stretch in ascent the walkers cross the A-6 via a bridge before joining a path surrounded by vineyards. This section is dominated by descents, a comfortable stretch. In a shaded area before reaching Cacabelos walkers will usually encounter Pati, revitalizing pilgrims with freshly squeezed fruit juice. The majority of pilgrims give a donation in exchange. Pati, a father, is also a specialist in Reiki massage techniques. He explains in this VIDEO. With energy renewed, and again travelling along fields full of vines, they will cross a local road before stepping on asphalt, this road is not abandoned until arriving at a resting area which welcomes pilgrims to Cacabelos by offering a short rest before descending to the village. Cacabelos Continuing on the N-VI, the old road, which before the construction of the A-6 was the main artery that connected Galicia to the plateau, the pilgrims cross to the other side of the river Cúa, where they will find the Shrine of La Quinta Angustia. Continuing along the right side of this road the pilgrims will face a demanding climb to Pieros, a small village with a hostel, a fountain and at the other side of the road a cafe. In Pieros there is the Romanesque church of San Martín. Hikers retake the N-VI (LE-713) and at the exact moment of reaching the summit come to a junction with yellow arrows on the ground that indicate a turn to the right, towards Valtuille.

The Original Way continues for a few feet parallel to the road. This detour to valtuille has become more popular over the years. It presents more uneven ground and is a kilometre longer than the original route, but many pilgrims prefer it in order to abandon the road as soon as possible. It is a path surrounded by vineyards. In Valtuille walkers will find the café La Escuela (closed for part of the year) and the rural accommodation establishment La Osa Mayor, next to the latter there is a drinking fountain. At the exit of the village the hikers re-join the path surrounded by vineyards. A little before arriving in Villafranca they will usually find a man, with a stall who sells everything from fruit to soft drinks and walking sticks. Those opting for Villafranca, along the most historic Camino, on reaching the crossroads of Valtuille should continue at the side of the road. A few meters later, well sign posted, there is a turn off to the right on a trail, predominantly of gravel. Here they will encounter a few slopes as they progress among the vineyards. This route passes in front of the workshop of the sculptor Nogueira, his home in Villafranca is easily recognized by the peculiar pieces of work hanging from the facade of the building.

The exit from Ponferrada is complicated. Due to its long and narrow avenues, which are shared with motor vehicles, although for a small stretch there is a cycle lane painted on the asphalt. Cross the road to enter the centre of Columbrianos via pedestrian crossing. In Camponaraya and the exit from Cacabelos the Camino is shared with motor vehicles. On arriving to Pieros, both routes are very similar. 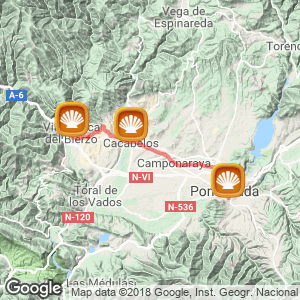