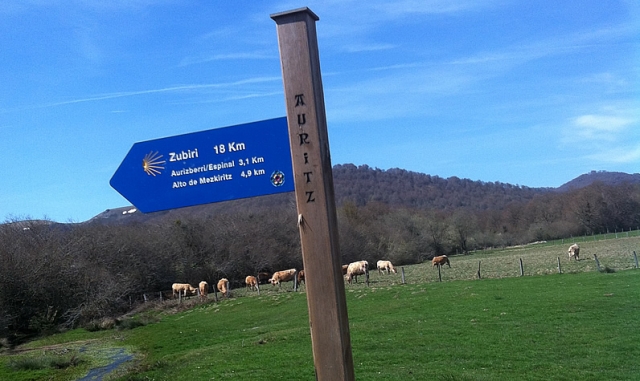 Whilst many pilgrims began their journey yesterday from Saint Jean Pied de Port, crossing the Pyrenees and the border between France and Spain, this day is still the baptism of fire for a great deal of pilgrims. From Vivecamino.com we detail you the entire course of the stage, undoubtedly one of the toughest and most beautiful in the Camino de Santiago.

The stage begins in Roncesvalles, situated at almost a thousand meters above sea level and ends in Zubiri, which lies at five hundred meters. However, to reach this goal many pilgrims agree that there is a sensation of hardly losing altitude. The paths that descend are long and pronounced and involve difficult uphill ramps, transforming the journey into a difficult, leg breaking but beautiful stage.

The way of Santiago waves goodbye to Roncesvalles along a gravel track that runs parallel to the (N135) road. Just at the exit for the historic enclave, the sign informs vehicles of the distance to the ultimate goal. Santiago de Compostela: 790 kilometres, however, the pilgrims that follow the Jacobean route have before them 781 kilometres in order to reach the Galician capital. Bit by bit the gravel turns to solid ground, and the N135, which continues very close to the path, is lost in sight by oaks, beeches, firs and holly of the Sorginaritzaga forest, which in local language means the oaks of witches.

In the XVI century, the forest played host to many covens (burning those accused of practicing witchcraft by the tribunal of inquisition). At the bottom of the path you find a replica of the white cross, erected by the church to purify the area that divides the towns of Roncesvalles and Burguete.

The cross of Roldan

The white cross, as mentioned previously, is also known as the cross of Roldan. Legend has it that at this point rests the remains of the popular commander of Carlomagno, although specialized historians dismiss this completely. At the end of XVIII lightning seriously damaged it and a few years later the French revolutionary troops, whom had taken the legend word for word, gave it the final blow, destroying the symbol that represented the defeat of their ancestors to the Basques.

Its reconstruction was not completed until 2006. On arrival to a warehouse, take the path on the left this returns to the Camino of Santiago, on the N120 road, cross over and continue along the gravel track, leaving behind a picnic area. The pilgrimage route returns once again to join the road. For a short time pilgrims share the road with vehicles until the entrance to the centre of Burguete (19 kilometres from Zubiri), where the pilgrims can take advantage of a number of services.

This small town forms part of the Hemingway route, given that it was an obligatory visiting place for the famed writer during his stays in Navarra. The days before and after the festival of San Fermin, the author relaxed here, fishing for trout in the Irati River. Level with the bank of Santander, turn right and descend a small ramp, a wooden bridge over a stream and follow the earthy path.

You encounter magnificent views of the peaks of the Pyrenees

Falsely flat until up close. There are still a few streams that run through stone structures and descend down the country road until Espinal (15.5 kilometres to Zubriri).   Towards the Summit of Mezkiritz Just before leaving the N120 Espinal, you take a left at the junction, which is well signposted. Here begins the climb to the peak of Mezkiritz (14 kilometres from Zubiri).

There is a small paved stretch before diverting to a gravel ramp its proximity to gates and tree branches can make it a little overwhelming. This is the most demanding part of the climb. Before reaching the summit you pass through a narrow, rough grassland area, although it is worth deviating a few meters from the path to enjoy the spectacular views of the valley. A few meters ahead, crossing the N135.  On the right hand side there is a plaque dedicated to Our Lady of Roncesvalles, upon which flowers are rarely absent. The pilgrim enters a woodland area, dominated by beech trees and sharp slopes. Having found the road again, take the narrow path on the right until you reach a roundabout.

A paved stretch that runs parallel to the road and is followed until Gerendiain (9.5 kilometres to Zubiri), a small town in the council of Erro, its buildings are distributed on either side of the road yet centres most of its services on the left. Gerendiain has a bar with a terrace in the main square, sandwich shops, the rural tourism house La Posada Nueva and a small supermarket (La tiendita de Biskarret) just at the exit of the village.

The last place on route to buy provisions until reaching the end of this stage. This small but historic village used to have pilgrim hospital that functioned until the opening of a complex in Roncesvalles.

Monument to a Japanese pilgrim

The next town on route is the neighbouring Lintzoáin (8.5 kilometres to Zubiri). On this downward path you meet shepherds and many sheep. In the town, despite being the administrative capital of the valley, it is difficult to replenish strength. The sign advertising known brands of beer may fool you. It is the gastronomic society (The gastronomic societies tend to stay closed and entry is only possible via invitation from its members). Consequently, pilgrims wanting to satisfy their thirst in Lintzoáin must settle for the village fountain.

The local taxi driver Patxi (649 725 951) is responsible for covering the area. A demanding asphalt ramp leads to a more demanding gravel one. The climb to the top of Erro is uneven and the combination of violent ledges and stretches with tricky downhill paths makes this conquest harder. Its difficulty is compensated for by stunning views of natural beauty. A majestic forest, not dominated by any specific species. Pine, oak and birch trees all share the limelight. In the resting area you will find a tribute dedicated to the Japanese pilgrim Shingo Yamashita, who died in 2006. Next to it, a couple of tree trunks arranged to form a seating area.

The descent to finish

Now on a downward path, leaving behind large electrical towers on your left, the Camino of Santiago crosses the road. At the other side the pilgrimage route continues, although without doubt hikers will make a small stop to enjoy the view from the lookout point (4 kilometres to Zubiri). The descent to Zubiri is one of the most dangerous of all of the French way. Every year, a number of pilgrims are forced to abandon their adventure shortly after beginning. Sprains, strains, bumps…ramps that are more like cliffs and stones of all shapes and sizes further complicate the route. It is worth paying a great deal of attention.

The path down from the peak of Zubiri is 4 kilometres for which it is not unusual to allow more time than the 4km to ascend.

Extreme caution should be taken on the descent from the peak of Erro to Zubiri. Recommendations are to take the road. Even expert cyclists suffer for not dismounting. Every year a number of injuries occur. It is a tough stage. It involves a lot of descents and many of the slopes encountered are unforgettable. Many cyclists choose to follow the road, given that some stretches of the route are on loose ground, although with a mountain bike it is possible, without much difficulty to follow the pilgrims trail, aside from a few fences and a couple of creeks where it is necessary to dismount. For those who choose a solid track, the road is not very busy. The area has a great tradition for cyclists, car drivers are used to sharing the route with bikers. And it shows. 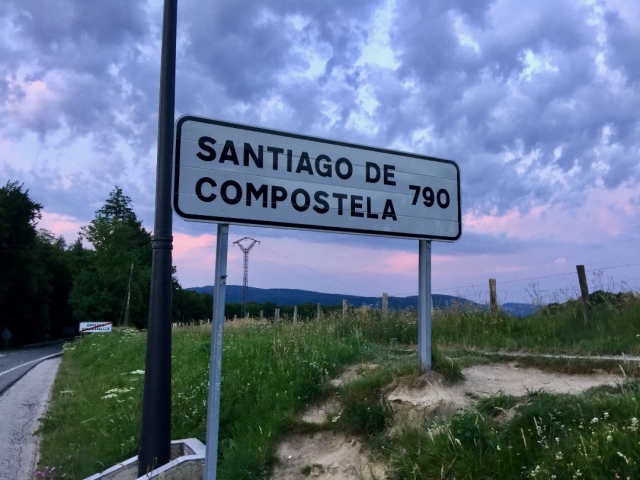 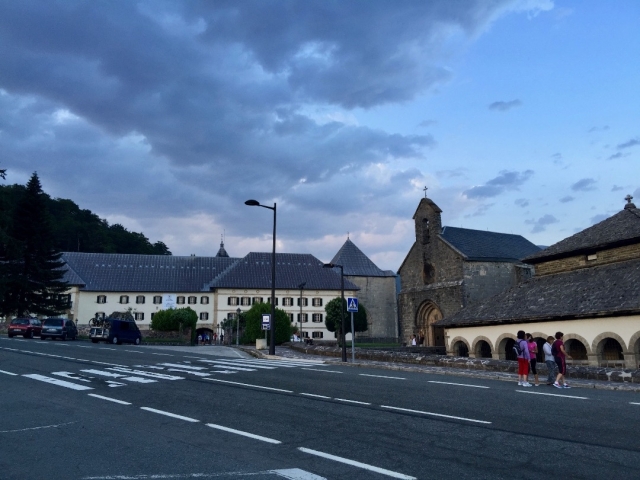 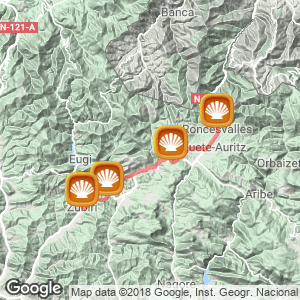