A Coruna is a place of departure for one of the possible routes on the English Way. It is the second most populated city in Galicia (250,000 inhabitants), after Vigo. A Coruña is a peninsular, connected to the mainland by a narrow isthmus. For this reason the centre and the historic heart of the city have two facades, one towards the estuary, with views over the area of the port and, another facing the bay and the impressive beaches of Riazor, Orzán and Matadero. The origins of A Coruña can be traced back to the Roman era and, it still conserves this evidence in its Fort of Elviña and tower of Hercules, the oldest working Roman lighthouse in the world. In 1589 María Pita was converted into the heroine of A Coruña for fighting against Sir Francis Drake. Centuries later, during the war of independence, A Coruña was one of the cities that offered the most resistance to the French advance, aided by the British army. In 1809 one of the most bloody battles took place, the battle of Corunna or Elviña, in which the British general Sir John Moore was wounded and died from his injuries, his men achieved his objective, to defeat the French and set sail for Britain.

Distance from the Camino de Santiago from A Coruña

If you are traveling on the Camino de Santiago or are planning to do so soon, you should know that the distance separating A Coruña from Santiago de Compostela is 72 kilometers. 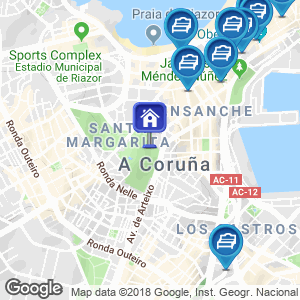