If the Main Bridge of Carrión de los Condes is one of the most important constructions of this town, the church of Santiago is another one of them. This religious building was built in the 12th century by the master Fruchel and is one of the most striking buildings of the transitional Romanesque style.

Designated as an Asset of Cultural Interest, this religious temple was very important for the Camino de Santiago. It was originally part of a monastery which had a hospital where pilgrims on the French Way could rest and be healed. Currently its activity is simply religious, however it is still one of the reference points for the Camino de Santiago.

It is a building located in the central area of this town. It has a rectangular floor plan with a single nave. Its base is still that of the original church, however it has undergone several restorations over the years, the last one being in the 20th century.

Although there are many aspects that we can highlight of the church of Santiago in Carrión de los Condes, it is the doorway with a semicircular arch that most impresses tourists. It has an archivolt on columns and is decorated with representations of important medieval trades in the town at that time. 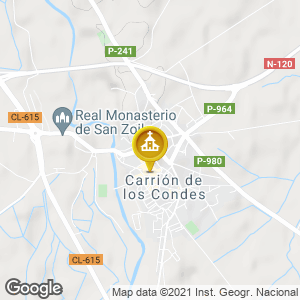