What to see in Carrión de los Condes 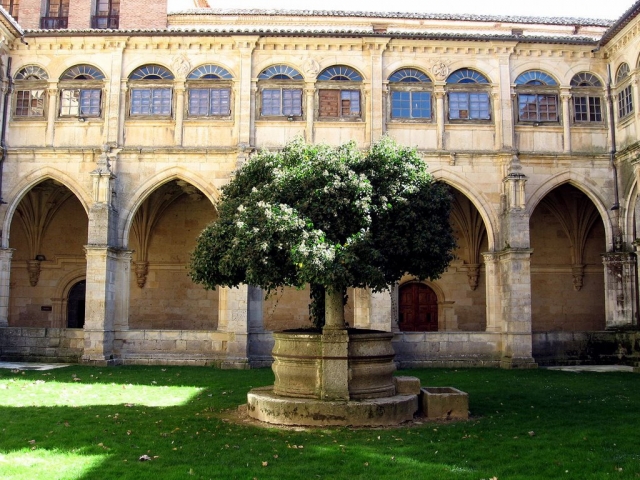 Hikers need not deviate from the pilgrimage route to visit most of the monuments that still remain in the locality. In fact, on entering the enclave they will reach the Shrine of Nuestra Señora de la Piedad, an ancient Gothic church with a single nave and that remains closed all year except for on the 15th of September, a few meters later, is the Convent of Santa Clara, one of the oldest Clara foundations in Spain.

Founded by two companions of the saint on the site of a small Moorish palace. In this neoclassical church they preserve the image of the Piety and Holy Christ, the work of Gregorio Fernandez, the greatest exponent of the Spanish school of sculpture. In the museum of the convent they have preserved various pieces from several centuries among which the famous Holy Infant with toothache, the coin collection and cribs from around the world stand out.

After this visit, the pilgrimage route continues through the Plaza Piña Merino and Calle Santa María to arrive at the square of the same name, here they will encounter the majestic church of Santa María de las Victorias and of the Camino, the oldest temple in the town. Romanesque from the early XII century, its construction appears to be linked to the "Tribute of the hundred maidens."   This tribute was acknowledged by the king Mauregato (in the year 783), to the illegitimate son of Alfonso the Catholic, Abderramán I given for help to take the throne of Asturias.

He promises to deliver every year a hundred virgins, which he did over a period of five and a half years. On the death of the King, his successors refuse to maintain this privilege. Of the 100 maidens four were from Carrión. On one of the trips made by the Moorish rulers to collect this "tax", according to legend, a miracle occurred. A herd of bulls allegedly went to meet the Moors, making them flee and, therefore, liberated the maids.

As gratitude to God for this act a church was constructed at the foot of the door with sculptures, which according to some critics represents the legend and depicts the figures of bulls and maidens.   Inside the temple the Gothic sculptures of Santa María and the Christ of Amparo. The pilgrimage route then continues, advancing towards the Plaza Marques de Santillana. Just before reaching the square there is a plaque commemorating the location of the house and birthplace of this military man and poet, considered one of the first historians of Spanish literature (XIV-XV century).

The route then turns left to the Plaza Mayor where the council hall is located. From here the walkers reach Calle de la Rúa, where they will find the monumental church of Santiago (late XII century). The narrowness of the street prevents the pilgrims from fully contemplating the beautiful splendour of all the monuments together. The front door of the temple is one of the best examples of Romanesque sculpture-comparable only to the Portico de la Gloria of Santiago, with a superb enclosure surrounded by the four evangelists and the apostolate under canopies of three lobes.

The Archivolt of the entrance includes 24 medieval figures.  Currently, a museum of sacred art is located inside (979 880 072).   Next to this church there previously existed an ancient hospital for pilgrims, all that currently remains is its arched entrance. From here, after passing Calle Esteban Collantes the walkers arrive to the Plaza de San Julian, in which they will find a church with three Baroque altarpieces and an image of the patron saint of the town, San Zoilo. Now back on the pilgrim path they turn left onto Calle Piña Blasco and the lower part of the enclave. They cross a bridge over the river Carrion to glimpse, just in front, the other great monuments of the town, the former Monastery of San Zoilo, now a hotel.

Constructed, allegedly, in the X, century, this monastery originally belonged to the order of the Benedictines, although over the centuries it became part of the Order of Cluny and the Jesuits. Little by Little it became more powerful due to its strategic location at the foot of the Camino. In addition, some relics from Hispanic roman martyrs such as Zoilo (a noble Roman patrician, he died the year 300) were brought here from Córdoba.

Throughout the pilgrimage route the site has gained fame because of its adjacent hospital offering generous portions of bread and wine. The pilgrims who visit these monuments can appreciate a number of styles, given its construction over the centuries. The portal of the church is Romanesque, with marble columns and capitals of stone, while its great cloister, one of the best in Spain, a beautiful example of Plateresque and Renaissance architecture.

For pilgrims with Credential tickets cost 1.50 euros. The site also reserves some areas dedicated to the development, knowledge and study of the Camino of Santiago, known as the Centro de Estudios y documentación del Camino de Santiago, with a Jacobean Library, opened in 1987 thanks to the efforts of the Friends of the Camino in Palencia.

The project emerged from an exhibition of different volumes that toured Spain and had great success. Since then the association decided to set a permanent venue. It has since become a library that has increased its number of volumes and currently has 4,500. Among them is a facsimile edition of the Codex Calixtino, ancient manuscripts and diaries or guides that pilgrims have sent them after visiting the place. The centre can be visited both with the entrance ticket to the monastery of San Zoilo or uniquely. In this latter case, entrance is free. The books are available to consult at the site. They cannot be taken out except for certain studies. It is also possible to view online volumes from there. In 2012 more than 21,000 people visited the centre.

Given its distance from Carrión (18 kilometres) they should travel by taxi. Villa Romana La Olmeda is an archaeological site, discovered in 1968 and which has allowed them to uncover a Roman mansion from 1600 years ago with several rooms, baths and mosaics. Its total area is 4,400 square meters. Check schedules and ticket prices on its website. 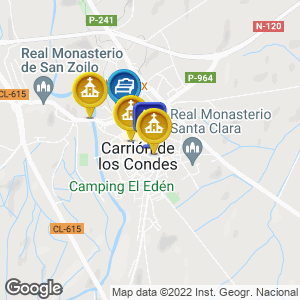