In the province of Palencia, within Castilla y León, we find the municipality of Carrión de los Condes. In this municipality we can find some monuments of great historical value, such as the Puente Mayor, which can be found over the Carrión River and has served as a viaduct for thousands of pilgrims coming from the French Way over the years.

This imposing bridge is a representation of the ancient bridge over which the locals passed hundreds of years ago with carts and horses. It currently has a total of 7 large spans and unlike the old bridge it does not have fortified gates at each end.

The original bridge located in Carrión de los Condes was built throughout the 11th century, thanks to the Countess Teresa, founder of the Monastery of San Zoilo. It was in the 16th century that it was finally demolished. Some time later and taking into account its architectural and historical value, it was rebuilt by Jan de Aral, who was replaced some time later due to his death. 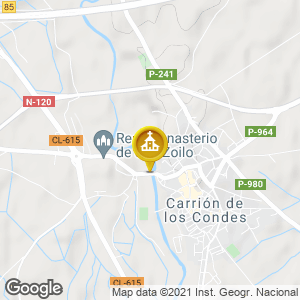