The castle of Castrojeriz is one of the most important tourist attractions in this town in the province of Burgos. This building, of which nowadays only the ruins remain, has been considered an Asset of Cultural Interest since 1949, after serving as a strategic location both for the Spanish crown and for the history of the Pilgrim's Way to Santiago de Compostela.

The history of Castrojeriz is closely linked to the French Way, as is the history of the castle of this town. The castle was built in the Middle Ages at an altitude of 900 metres above sea level, in a strategic location from which it was easy to keep watch for the arrival of any enemy. This did not prevent very important historical battles from taking place here, including those between Alfonso the Battler and Doña Urraca.

A castle full of history

Another of the most important historical events that took place in the castle of Castrojeriz is centred on Leonor de Castilla, Queen of Aragon. After the death of her husband in 1336, Leonor fled to the kingdoms of Castile and León with her children for fear of Pedro IV, her late husband's son. It was not until years later that her nephew Pedro I captured her and imprisoned her in Castrojeriz Castle, where she was murdered in 1358.

Although this building has been remodelled several times, it is currently in ruins. The original structure of the castle collapsed almost entirely due to the Lisbon earthquake in 1755. This does not mean that its remains are not currently open to the public, and it is one of the most important points of interest in this town. 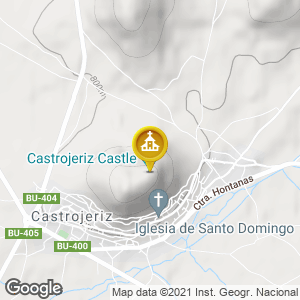