What to see in Castrojeriz 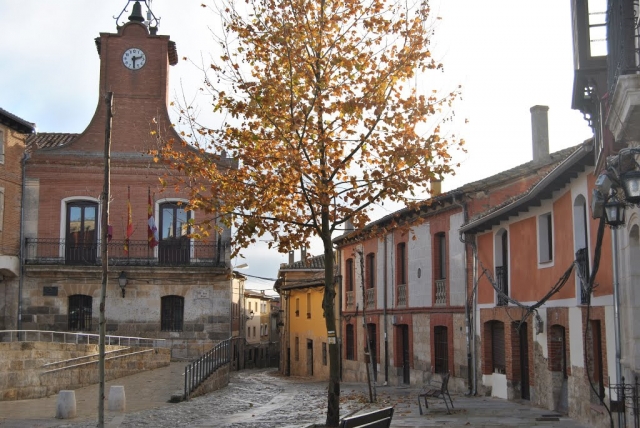 The first monument the pilgrims will encounter when approaching Castrojeriz (three kilometres before for centre) are the ruins of the Hospital general de San Antón and San Antonio Abad. This monastery, which was under royal patronage, was founded in 1146, although the impressive remains of the building date back to the XIV century. It was of the school order of the Antonianos and its church, of three naves, previously they practiced a cure called 'evil fire or fire of Saint Anthony ", to counteract a widespread disease common in the middle Ages caused from eating cereal with ergot, a fungus developed in the Rye.

The Camino of Santiago passes under the two beautiful arches of the portico, elevated, protectively over the entrance to the church, an unusual design along the French Camino. Pilgrims can still see, on the right two food stores in the porch where the monks left food for pilgrims passing through the enclave at unusual hours. Since the summer of 2002 this ancient pilgrim hospital has been converted into a private refuge, one of the most charming on the French Camino.

Two kilometres later, some distance from the Jacobean route, the Convent of Santa Clara is located, famed for making good artisan pastry. A daily Mass takes place at 08.30 hours and, the Blessing of the pilgrim, at 17.15 hours. Back on the pilgrim route, they pass in front of the Collegiate Church of Santa María del Manzano, where different styles can be observed. Its construction began in 1214 authorized by the canons, of Romanesque-Gothic style, in the XV century all the vaults were reconstructed to a Gothic taste. In the XVIII century the Chapel of the virgin of Manzano was erected, as well as a crypt for the burial of some counts and a new apse.

Currently it is home to the Museo de arte Sacro (the sacred art museum) of the region (opening hours, in summer are from 10-14 and 17-20 hours). A Jacobean legend propagated by the town recalls how Santiago jumped on his white horse from the castle of the centre and stopped at an apple tree, in the hollow trunk of the tree he found the image of the Virgin venerated in the Temple, the patron of Castrojeriz, to whom Alfonso X the Wise dedicated five of his songs recalling the prodigy attributed to miracles.

At the door of the church there are some horseshoes, which according to popular belief is in memory of the apostle jumping onto his horse. Advancing on the Camino the pilgrim arrives at another temple, on this occasion, the church of Santo Domingo, mainly of Gothic style and which possess a beautiful portal of Spanish plateresque style from the second half of the XVI century. At this point, though far from the centre, on the left side- in the lower part of town known as "the French way", by passing pilgrims-, are the ruins of the convent of San Francisco, from the XIV century.

A few meters further ahead the pilgrim locates on the left side the palace of the Counts of Castro, a palace of kings of which today all that remains are only four round towers, and successive arcaded medieval houses. After continuing the route and after passing the square Plaza del Fuero, the pilgrims are presented with two possible options they can either turn left onto Paseo Puerta del Monte or continue straight ahead. The first option will take them to the remains ancient wall, built in 1212, which leads from the castle and to the town centre of the municipality. They will also come to the Ethnographic Museum, inside they exhibit a collection of farming implements, tools, machine tools traditional to the region (summer time opening hours are from 10.00 to 14.00 and from 18.00 to 20.00), on continuing the route the walkers locate Casa de Gutiérrez Bayona.

Constructed at the end of the fourteenth century, a plaque recalls that in 1521 the Royal Council of Castile, a consultative body of the Crown, resided in Castrojeriz. If the second option is chosen, that of continuing straight ahead, the pilgrims come to the Plaza Mayor, presided by council building and with a curious elongated layout in accordance to the design of Castrojeriz as a "villa-caminera" (a town constructed along its main road and walking route). It consists of terraced and semi-detached houses, constructed over different periods and flanked by arcades.

Later, and now back with hikers who chose the other detour, they reach the church of San Juan. In the XVI century Rodrigo Gil of Hontañón, the architect of the Gothic cathedrals of Salamanca and Segovia, constructed over an earlier temple, a church of German Gothic style. With narrow naves and columns, main features include the XIV century cloister and a beautiful coffered ceiling.

It has a permanent exhibition of From Castrojeriz to Bruge. Commerce and Patronage on the Camino of Santiago, a route from the XV and XVI centuries showing the impact of the wool market and the merchants on the town of Burgos who participated in it. Summer opening times are from 10.00 to 14.00 and from 17.00 to 20.00.

As a separate visit, and elevated above the enclave, is the Castle, which was of importance in the early centuries of the Reconquista, and its first construction dates back to the IX century. The fortress comprises of three distinct parts. Almost hidden there is a square tower situated on the restored Roman foundations, the Visigoth, during which time the castle was expanded and the medieval part at of the XIV century. Access is good but those who wanting to visit should know that it takes an estimated 20 minutes to arrive.

Points of interest of Castrojeriz (3) 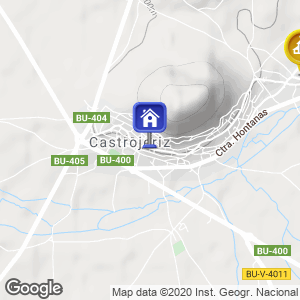