Increasingly, the goal of the Camino is not Santiago, but rather Finisterre, the second most visited place after Compostela. 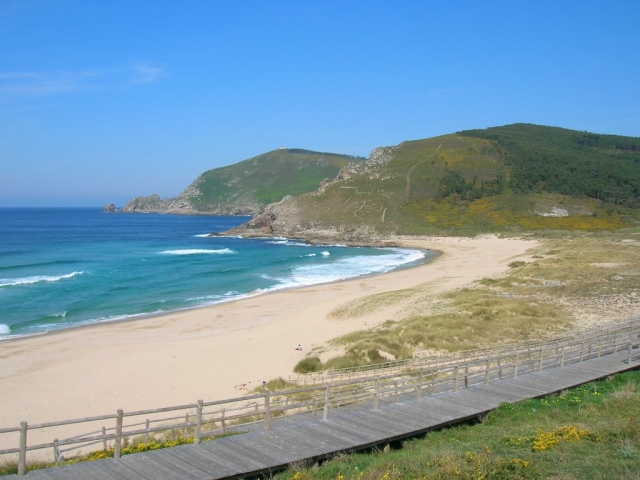 Finisterre, the other goal of the Way of Saint James

Increasingly, the goal of the Way of Saint James is not in Santiago, but in Finisterre, the second most visited town in Galicia after Compostela. Located in the far west of Europe, in the corner identified by the Romans as the end of the earth (Finis Terrae), it is a goal of great symbolism, surrounded by a multitude of legends, in which religious, maritime and stony elements are intertwined.

Watching the sunset in Finisterre next to its legendary lighthouse, burning the shoes that accompanied the walker on his journey on this rocky slope overlooking the ocean or bathing in its long sandy beach are just some of the rituals that travellers renew every season. A classic pilgrimage destination since the Middle Ages, with illustrious walkers and emblematic lodgings, this place treasures a multitude of Jacobean traditions.

According to popular lore, the Apostle St. James would have travelled there to destroy the pagan temple of Ara Solis, where the star king was worshipped. It was also in these lands that one of the miracles performed by his disciples took place, as they sought to bury his remains on Mount Libredón, in present-day Compostela.

What to see in Finisterre?

Located at Cape Finisterre, the lighthouse is the westernmost construction of its kind in Europe, which also protects one of the most dangerous coasts, the Costa da Morte. It was built in the 19th century and its light reaches more than 23 nautical miles. This place is the perfect spot to watch the sunset, after finishing the Camino de Santiago.

Since the Middle Ages, the walkers who reached this oceanic goal bathed in Langosteira beach, in an attempt to purify their bodies and get rid of the accumulated dust. The walkers who usually take a bath in Langosteira can enjoy the long sandy beach of almost 2 km of coastline, characterised by calm and crystalline waters.

The Ézaro waterfall is one of the most impressive natural spectacles to be found in Galicia. It is the mouth of the river Xallas in the sea, which is recommended to visit in winter, when the flow of the river is more abundant.

Located on the outskirts of Fisterra, in the midst of stunning natural beauty, the Church of Santa María das Areas is a unique place for pilgrims, devotees and art lovers. This jewel of 13th century Romanesque architecture attracts the attention of pilgrims from all over the world. 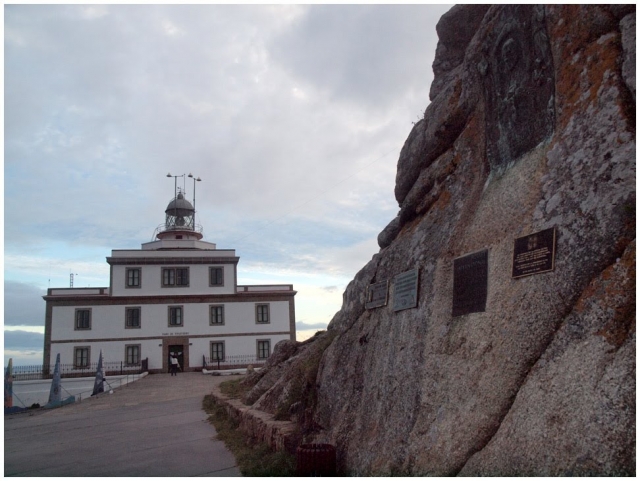 How to get to Finisterre? Main connections

The easiest way go to Finisterre is from Santiago (98 km) or A Coruña (108 km). Both cities have airports and good rail connections. From Finisterre you can reach Santiago by bus, which has several daily frequencies.

Where to sleep in Finisterre?

This town has become one of the main tourist centres in Galicia, which is why there is a wide range of accommodation on offer at a variety of prices. Some accommodations have special rates for pilgrims, and many of them have their own restaurant and daily menu. In Finisterre we can also find a public hostel and many other private ones.

Festivals in Finisterre: Festivals and traditions

Pilgrims who happen to arrive in Finisterre in the middle of Easter will be able to contemplate the devotion with which the locals live this festival, declared of National Tourist Interest. On Thursday and Friday, next to the church of Santa María de las Arenas, various scenes of the Passion of Christ take place, followed by thousands of pilgrims. The main day of celebration is Easter Sunday, when, after the performance, the "a danza dos paos" is danced, an interesting artistic manifestation whose origin dates back to the 17th century.

In August, another typical celebration takes place, with a gastronomic flavour. On the first Sunday of this month, the longueirón, the Fisterran delicacy, is honoured. Two weekends later, the Fin do Camiño festival, a folk music event, takes over.

Distance from the Camino de Santiago from Finisterre

If you are traveling on the Camino de Santiago or are planning to do so soon, you should know that the distance separating Finisterre from Santiago de Compostela is 98 kilometers. 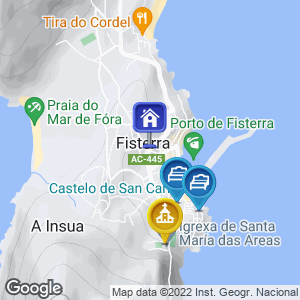