Make the most of the experience by tasting a typical Camino de Santiago recipe, the Galician empanada, a very famous traditional dish from Galicia 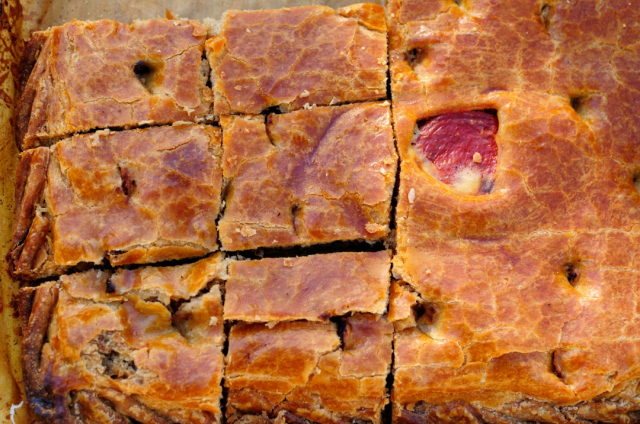 Santiago de Compostela is a city that stands out for countless qualities, in addition to being the autonomous capital of Galicia, it is known for the Cathedral of Santiago and the world-famous Camino de Santiago, where thousands of pilgrims come every year to visit the Apostle Santiago. Another strong point of the city is its gastronomy, very exquisite and varied. The Galician empanada is one of the best known Galician recipes, although it is typical of this community, it has spread beyond reaching coastal and inland areas of the peninsula.

The Galician empanada recipe is reminiscent of pilgrimages and festivals, being present as a companion at every celebration meal. In addition to this association, it is also linked to the Camino de Santiago, since the pilgrims who arrived in the city felt its smell when walking its streets. Another point to highlight are the traces that exist of the Romanesque empanadas, a clear example found in the Portico de la Gloria of the Cathedral of Santiago de Compostela. The origins of the Galician empanada are thought to be even older, mentioning the Goths as the protagonists who brought the famous recipe to the peninsula in the 7th century, and established its preparation.

Ingredients of a Galician empanada

In addition to all the recipes for which Galician gastronomy is known: octopus, Galician broth, cod, pancakes, cockles, scallops, Santiago pie, etc. The Galician tuna empanada is a traditional dish famous for its ingredients, since they are simple and varied. You can enjoy an excellent homemade Galician empanada, choosing the variety of its ingredients. The most typical of the area are those of fox, raxo, octopus, scallops, the traditional one with tuna, and also other more original ones with turnip greens, spinach, chicken, cod with raisins, etc.

One of the secrets to achieve a rich Galician tuna empanada is to pay attention to the dough. You can choose between different types of dough; Although the traditional one is made with flour, olive oil, yeast and salt, there are others based on puff pastry. The filling of the empanada is accompanied by a rich onion sauce, in which in some cases green and red peppers are also introduced. What are you waiting to try this rich recipe? Live the gastronomy of the Camino de Santiago and try its best dishes!