The origin of Santiago de Compostela is linked to the discovery of the remains of the Apostle, which meant that this place bathed by the rivers Sar and Sarela became in the Middle Ages a destination for pilgrims and worshipers from all over Europe. 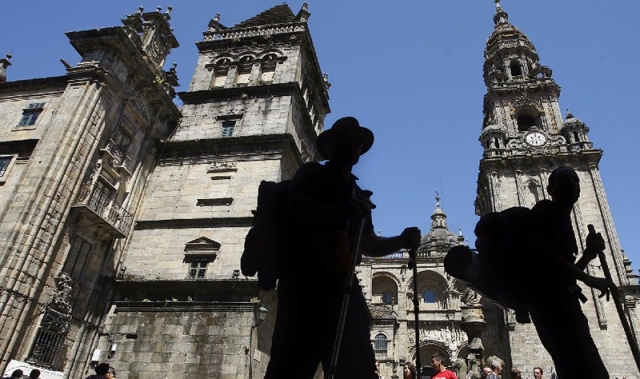 The origin of Santiago de Compostela is strongly linked to the discovery of the remains of the Apostle, something which led to this place, bathed by the rivers Sar and Sarela to become in the Middle Ages, a goal to be reached by pilgrims and the faithful from all over Europe.

Prior to the discovery, the area where the historic city is now situated was once known as Mount Libredón, it seems that it was once home to a Roman villa –a belief that provoked archaeological excavations. This settlement remained until the seventh century. Six centuries earlier (in the first century) and, next to the enclave, a mausoleum was also established, where, according to legend, the disciples of Santiago – Theodore and Athanasius buried his remains. Christian and oral tradition claim that the Apostle, when alive, had preached in the famous Hispanic finis terrae (end of the world) and, after returning to Palestine and being beheaded, his followers wanted to bring his body to this location, the farthest place where he preached.

The remains of St. James

The history jumps forward to the IX century when the hermit Paio saw – in an unknown year, at some point between 813 and the 830 -, how some lights – or stars – lit up the ruins of an ancient necropolis. The hermit reported his finding to Theodomir the Bishop from the neighbouring Iria Flavia, who examined and identified the remains of the tombs as being of the Apostle. He communicated this to the monarch of the kingdom of Asturias and Galician, Alfonso II. On learning of this discovery, the king did not hesitate to undertake the Camino to Santiago, thus figuring in history as the first ever pilgrim and laying down the foundation for the route later known as Camino Primitivo (Primitive way). On arriving to Compostela he founded, on the sacred spot, the first church and ordered for a monastery to be constructed to house the monks responsible for guarding the temple and the remains of the Apostle. This is the monastery of San Paio, which still remains today in the vicinity of the cathedral, it is currently inhabited by nuns. 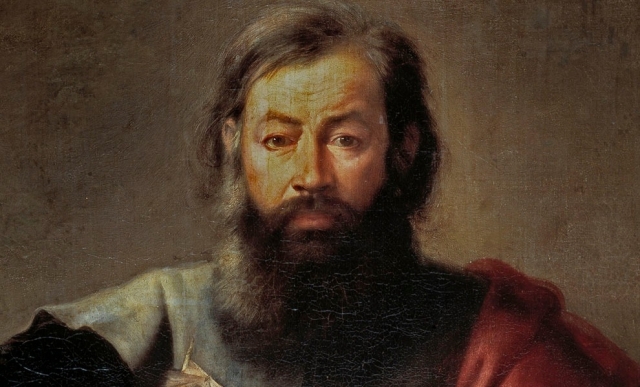 The primitive church, consecrated in 834, has remained standing for no less than four decades. In 874, and after his pilgrimage to Santiago, the monarch Alfonso III ordered a larger temple to be constructed. The original church had been outgrown as a result of the continuing trail of hikers who on learning of the miracle, began to flock to the place, helping to establish the city. Construction of the second temple began, with masonry walls, prior to the Cathedral itself.

Work begins on the Romanesque cathedral

Santiago took its first steps to becoming the spiritual lighthouse of Europe, a title that would bring numerous riches to the city. Knowing this, the Muslim leader of Andalusia, Almanzor, devastated the city in the year 997, although he did respect the tomb of the Apostle. Legend recalls that it was the Christian prisoners who, after the raid, carried the temple bells from Compostela to Cordoba.

After this event and, following the reconstruction of the centre and, of the temple itself, an urban expansion of Santiago took place. Fortified walls were constructed to defend the expanding historical city and ground preparations were made so that, in 1075, building work could commence for a larger temple, more appropriate for the popularity of this pilgrimage. Thanks to the initial impulse of bishop Diego Peláez, King Alfonso VI and, especially, to the support of Xelmírez Diego, the first archbishop of Compostela and, the architect responsible for the transformation of the city, work began on the Romanesque cathedral, the temple was constructed in accordance with the ideas of the canons and their knowledge of other large pilgrimage churches visited previously. 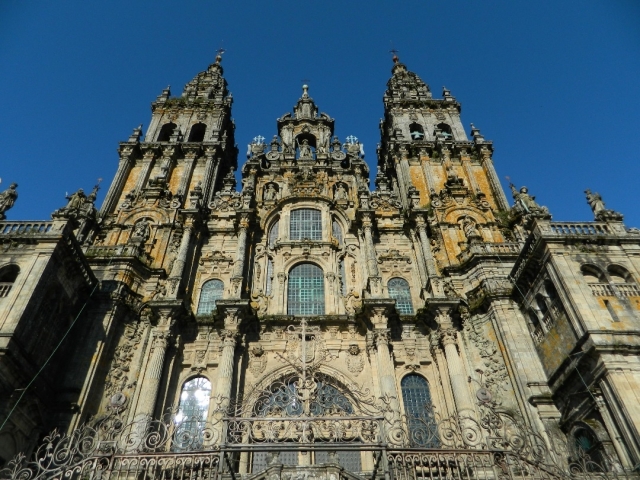 For many historians, it was in the XII century, that the city under went its most glorious moment in the history. The French Way attracted thousands of pilgrims, with the added fuel of the publication of the Codex Calixtino, the first pilgrimage guide to Santiago. The cathedral progressed steadily and its construction involved some of the best builders and architects of that time, such as Maestro Mateo, the creator of the sublime Portico of Glory a fine masterpiece of Romanesque architecture.

The Ancient University is founded

After the consecration of the cathedral in 1211, the golden age of the pilgrimage to Compostela took place, a boom of walkers and, religious fervent changed the future of the city. Outside the historic centre, on the other side of the fortified walls, several convents of various orders, such as Santa Clara and Belvis, helped the city to expand further. In the surroundings of the temple several guilds were established and workers lives revolved around providing services to the walkers. The concheiros, selling scallop shells to walkers as physical proof that they had completed the pilgrimage is just one example. On every street commercial trades were flourishing (including the production of metal bowls and silversmiths, in square Praza of Praterías), all of which boosted further life into Compostela in the middle Ages.

After the XIV and XV century, and following a rather poor economic period for the ecclesiastical powers of Santiago, in 1495 the city saw the creation of another of great landmark when the notary of Compostela, with the support of the abbot of San Martín Pinario set up a school for the poor known as the school of grammar, seed of the subsequent University. The academic university centre, one of the oldest in the world, was driven mainly by the Archbishop Alonso de Fonseca and, today is still one of the great pillars on which life pivots in Compostela. 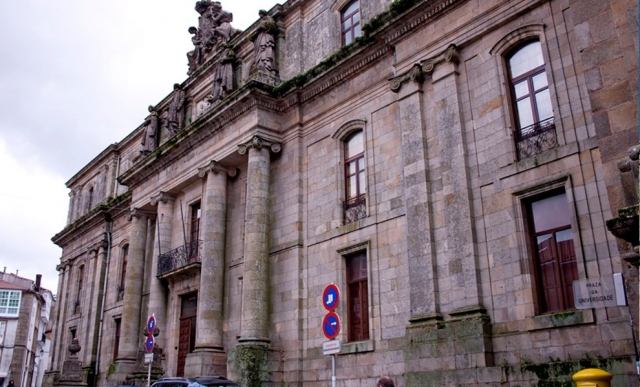 In the XVI century Santiago continued its urban development and, it was during these years that the majority of buildings surrounding the cathedral were erected. Among them the former Hospital Real, now the Hostel dos Reis Catolicos, commissioned by monarchs Fernando and Isabella to assist and care for pilgrims.

In the XVII century, and even though the pace of pilgrimages had slowed down, the city was still alive and, lived its greatest aesthetic revolution. The Voto of Santiago, an unfair medieval tax which numerous Christian cities of Spain were forced to pay to the archbishop of Compostela as compensation for the “critical” help provided by the Apostle in the battle of Clavijo-which was of great importance for the course of the Reconquista-, and served to finance many of the great construction works of this century (the tax remained in force until the XIX century). In the cathedral the altar was transformed, the Holy Door was opened and, more importantly the temple was completed with its great Baroque facade leading onto Obradoiro Square, the most photographed picture of the basilica. Next to the temple, other squares and noble houses were constructed in a defined formation, as has occurred in Obradorio square with the construction of Pazo de Raxoi, the home of the present council.

The fall and rise of pilgrimages

After decades of religious and political change, during which the mitre of Compostela lost power and influence and, the pilgrimage to Santiago entered a progressive decline, an important discovery was made to reverse the trend. In 1879 they rediscovered the relics of the Apostle in the cathedral, they had been lost since the XVI century, after being hidden for fear that English privateers might take them. A search was conducted and bones were located in the current chapel of Magdalena. The Pope of Leon XIII confirmed their authenticity just five years later following a study undertaken to calculate the number of walkers to Santiago.

Throughout the XX century, Compostela (a name that derives from Field of stars, the stars that illuminated the tomb of the Apostle) was confirmed as an important cultural centre, spiritually, academically and politically and the Camino de Santiago rises again. This in turn gave way to a decisive event for the town and, in the late ’80s the city was elected to be the host of the Xunta de Galicia (Galician Government) and, for regional institutions, thus converting the city into the political and administrative capital of the region. Santiago experimented and lived, from this period a strong momentum, reinforced by a revival of the Camino.

In recent decades, the city has been awarded several accolades most notably in 1985 it was designated as a World Heritage Site by Unesco. Among its many strengths it was renowned and, still is, for its urban beauty, monumental integrity and spiritual significance as apostolic sanctuary.