In the southern area of Lisbon is the Alfama neighborhood, one of the most emblematic of the capital of Portugal. This neighborhood, besides being one of the most characteristic, is one of the oldest and that is why every year it receives hundreds of tourists from all corners of the world. This has caused that with the passage of time the neighborhood of Alfama has been modernizing, something that does not suppose that there still we can find all type of historical constructions.

Originally considered as a fishermen's neighborhood because it is located on the banks of the Tagus River mouth, the Alfama neighborhood owes its name to the Arabic word Al-Hamma which means source. It was one of the neighborhoods that was best preserved after the 1755 earthquake, which also affected emblematic buildings related to the Way of Saint James such as the Cathedral of Lugo.

Although there are many artistic resources that we can find in the Alfama neighborhood, the Portuguese traditional music is one of the most outstanding of the place. In the streets of this Portuguese neighborhood is very typical to listen to Fado either from the balconies or in any establishment, being especially popular on the day of San Antonio to listen to Fado in its glory.

In addition to Fado, tourists from all over the world and pilgrims who come to the city to walk the Way of St. James from Lisbon can enjoy emblematic places in this Portuguese neighborhood. On one side is the Jardim Botto Machado, from which you can see the popular Feira de Ladra, a classic of the Alfama neighborhood, while on the other is the Santa Lucia viewpoint and the Portas do Sol viewpoint, from which you can see the neighborhood and have a spectacular view of the Tagus River. 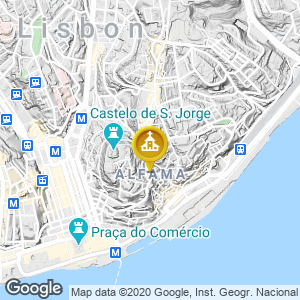