The Camino de Santiago is one of the oldest traditions in the history of mankind. The discovery of the remains of St. James the Greater marked a before and after in the Middle Ages, as it became a cultural phenomenon that marked the beginning of pilgrimages. The event travels from all over Europe, and to this day continues to be one of the most unforgettable experiences that can be made.

Thanks to the support of several kings, popes and nobles, today we find numerous buildings of great historical, cultural and artistic relevance. The French Way, also popularly known as the Main Street of Europe, has been one of the busiest routes since ancient times, which is why we find multiple temples or churches within the Camino de Santiago, such as the Convent of Santa Elena.

The French Way is considered one of the most traditional routes, since according to popular culture, Europe developed through this route because of the artistic, cultural and social variety provided by the pilgrims who traveled to the Galician capital. Nájera is discovered on its way, located in the very steppe of La Rioja, we find the Convent of Santa Elena.

The Convent of Santa Elena served in the 17th century as a Pilgrims' Hospital, hence its importance on the Pilgrims' Route to Santiago de Compostela. The temple offered all kinds of services to people who came from distant lands to reach Santiago de Compostela, and although today there are no remains of this hospital, inside are kept important objects of great value such as sculptures and parchments.

The weather in Nájera 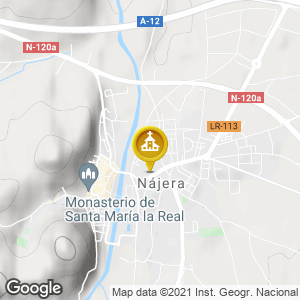