If there is a church that best represents the history of the Camino de Santiago after the Cathedral, it is the church of Santiago located in Padrón. It is a building from the mid-nineteenth century that has happened to different churches and reforms, being the first construction of the tenth century. It was built a few meters from the bank of the river Sar where according to tradition, the disciples moored the boat in which they transported to the Apostle during the Traslatio from Palestine to Galicia.

The highlight of the Church of Santiago is the Roman ara located under the main altar. This ara, called Pedrón, gives its name to the town where it is located and it is according to the Jacobean tradition, the ara where the ship was moored in which the disciples Theodore and Athanasius came with the remains of the Apostle. Originally, this Ara was built by the Romans as a tribute to the god Neptune, but over time Christianity reinterpreted it as a port element. On one of its sides, you can still see a small inscription that according to studies can say "To Neptune, the Iriense forum with your money".

In addition to the Pedrón, inside the Church of Santiago there are different elements that refer to the Apostle Santiago and the history of Traslatio. From two oils of the 18th century to a reliquary with the letters S.JAC.M.AP, among other things. 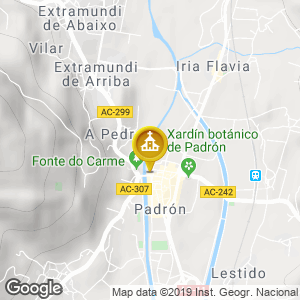