What to see in Padrón

The medieval Rua Longa, the Plaza of Abastos, Paseo do Espolón, the church of Santiago, where they conserve the Pedron, the Roman altar dedicated to the God of Neptune, where according to tradition, the disciples of the Apostle moored the boat on their journey from Haffa (Palestine) with the remains of Santiago.

On this granite block the following inscription can be read: “A Neptuno el Foro Irinse con su dinero”. (In dedication to Neptune with the money of Iria Flavia). In the Middle Ages it became a custom for pilgrims to hug the stone. In addition there are many references to the presence of the Apostle and his remains in Padron.

The bridge of Santiago, the Tower Moucha, the fountain of Carme, the Convent of Carme (1752), the Viacrucis of Santiaguiño do Monte, the chapel of Santiaguiño, la fuente, Cruceiro de Fondo Vila, Alfolí do Sal, the town palace (XV century), situated next to Rúa Longa, Palacio de Quito, Botanic-Artistic garden, Rosalia of Castro museum.

Visits to the neighbouring Iria Flavia The parish church of Santa Maria la Mayor. The Foundation of Camilo Jose Cela, writer and winner of the Nobel literary prize in 1989, Cervantes prize (1995) and Principe of Asturias (1987). The Train museum of John Trulock.

Points of interest of Padrón (1) 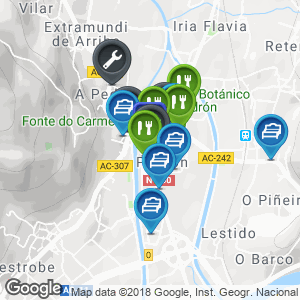