In Ponferrada there are several emblematic places that everyone knows, but none is as characteristic as the Clock Tower. This tower is a point of reference for tourists and inhabitants of the area, making it one of the most recognized places in Ponferrada.
Built in 1567, it is a building of great historical value in Ponferrada. At that time it consisted of only two sections, until 1693 when a third section was added, where the bell is currently housed. Its current shape, and more precisely its silhouette, is the image that best represents the city of Ponferrada.
Although its name describes it perfectly, it does not reflect the history that the Clock Tower has behind it. This building is part of the only gate of the medieval wall that is preserved in the city of Ponferrada. The gate in question is called Arco de las Eres and is the one that opens the way to Clock Street.
Although the most representative element of this tower is its clock, there are other elements with which it shares space. On both sides of the tower we find an engraved coat of arms, while at the top is the bell, in addition to a large spire. Currently thousands of tourists can see them every year, as in the past did the pilgrims coming from the French Way.
Photos & videos
Activity 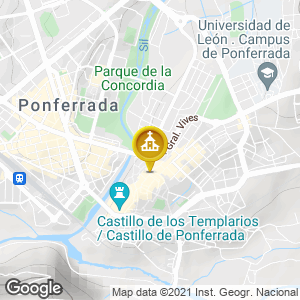