The Pilgrim's Church or the Pilgrim's Sanctuary is located in the town of Sahagún, a small municipality in the southeast of the province of León. It is a religious building founded in 1257 which was built at the request of Alfonso X, king in those years, by several ecclesiastical figures of considerable power.

Although in its origin this church was used as a Franciscan convent, a religious group that disappeared at present, it is currently known as the church of the Pilgrim, by a figure that was inside for many years. This figure from the XVII century represented the Virgin dressed as a pilgrim and is currently in the museum of the same town.

Although it is located in the town of Sahagún, in the province of León, this church is on the outskirts of the municipality, at exactly the highest point. Not for this reason there are few people who visit it every year, among which stand out both the pilgrims coming from the French Way, as well as the tourists who come to this town every year.

The feast of the Virgen de La Peregrina

Although many people come to this historic temple throughout the year to learn more about the history of this town, the best time to visit it is during its patron saint's day. Since July 2, 1688, the feast of the Virgin of La Peregrina has taken place there, where the figure of this virgin goes on a pilgrimage and different celebrations take place. 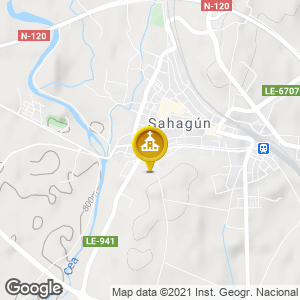