This stage, with fewer kilometres than the route that proceeds to Verín, was once the historic Camino taken by pilgrims on the Silver Route to Santiago and was also the chosen route of Gallegos on their journey to work the harvest of Castilla. The journey is pleasant. The descents are at times very steep. There are stretches of great beauty. Only in Campobecerros will walkers find food and accommodation services. There are no albergues in between.

The journey begins in the Plaza Mayor of A Gudiña, a place with a stone cross and Jacobean symbols, it is here that the routes that lead towards Verín and Laza separate. The second, a historic Camino that involves fewer kilometres, heads to the right and enters along the street Rúa Cima de aldea. In the main square the rail company Adif warns walkers wanting to continue to Laza that the official route has been , due to on going construction work on the AVE. To complete the alternative Camino pilgrims should take the itinerary via Verín from the plaza mayor, this route departs from A Gudiña on the N-525 and takes a turn off after the service station towards O Lombo Mirón.

If continuing on the official Camino, walkers advance on the long and slightly uphill rúa Cima de aldea that, bit by bit, converts into a single path without houses on either side.   Passing through Venda do Espiño, Venda da Teresa, Venda da Capela and Venda do Bolaño, with two rural apartments. Arriving at the reservoir of As Portas, the biggest in the province of Ourense and the second largest in Galicia after Belesar. From here there is a steep descent to Campobecerros. This location is the only one of the day with services for pilgrims. There is no longer an albergue, it has been closed since 2012, there is however a guesthouse called Casa Nuñez where walkers can eat and spend the night. This accommodation also offers a taxi service.

Another possibility for lunch is the curious bar/shop Da Rosario, where time appears to stand still. Pilgrims can have lunch or snack or sandwich at an affordable price. Also, at the exit of the enclave Meson Taberna Penaboa is situated. Portocamba is reached and more than eight kilometres downhill later so is Laza, after passing As Eiras, with a chapel and at the exit a well designed picnic area with tables, chairs, shade and a fountain.

The journey to the albergue of Laza, well situated in the centre of the village, next to the council building, is easy to find. Although, pilgrims wanting to stay here will need to stop at the civil protection building first in order to register and collect the keys.

Cyclists can cover the whole stage on the official Camino apart from the steep descent to Campobecerros, of great difficulty due to the ground of chalk. This terrain is liable to be slippery especially during rain. 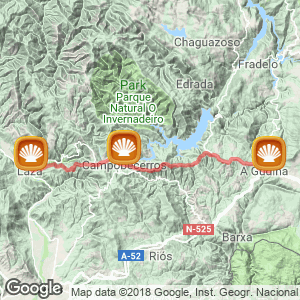