This variant of the Silver route that heads towards Verín is a rewarding one for walkers with many kilometres on earthy tracks rather than on asphalt. The motorway and the national road run close to the route, almost parallel to it. The main disadvantage is its length (37 kilometres) pilgrims will always have the option however, of stopping in A Igrexa where there is a pretty albergue. At the other places passed on this stage there are hardly any services. Those with the strength to do so are recommended to complete the journey in one day.

Pilgrims wishing to continue on this variant will have to choose, in the Plaza mayor of A Gudiña, the place where the two alternative routes to Laza and Verín separate, the Camino that departs to the left. There are signs to direct walkers who prefer this option and also to warn them that the route involves an extra 33 kilometres to reach Santiago. Passing through A Gudiña, O Lombo do Mirón, the parish of San Mamede de Pentes. After passing a petrol station and the hotel-restaurant-asador Mesón de Erosa, with a shop selling basic food supplies, pilgrims should be careful to not be confused by the double signposts indicating the route. They should continue straight ahead on the national road if they wish to continue in the direction of Verín.

The other sign refers to an alternative turn off by Adif for the stage of A Gudiña – Laza. Hikers will arrive at Alto da Mesón de Erosa (at 895 meters in altitude), San Lourenzo de Pentes, Riós, the viaduct of Mente, and O Navallo. On the N-525 Vendas da Barreira is also reached, one of the largest locations passed on this stage. Here pilgrims will find some basic services, such as a shop. For lunch they can go to As Ferreiras, in this location they will find restaurants and bakeries.

Later they will reach A Veiguiña, Trasestrada, A Igrexa, with an arts centre known as the Centro de Interpretación da Castaña, this establishment has since been reformed and currently functions as an albergue for pilgrims. From here walkers reach Sarreaus, San Pedro de Trasverea, Mirós, Fumaces. Situated 10 kilometres from Verín by road. Pilgrims will move away from asphalt until reaching Verín but they will have to enter the location on the national road. There are garages that may be able to assist any emergencies that cyclists might have, a few restaurants and a Red Cross building.

The stage can be completed on the official Camino without any problems. 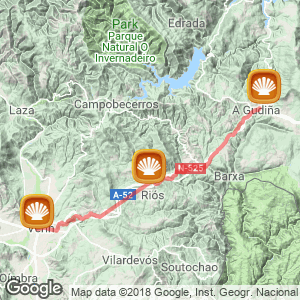