The exit from Agés is via the main road that passes through the town itself. Leaving on the left hand side a small picnic area with a couple of swings, the point at which the town of Atapuerca can be seen, the next destination. After two and a half kilometres on the local road (well paved and with few vehicles, but no shelter), several posters (one of them, for the visitor reception centre) inform pilgrims that they are about to enter Atapuerca.

The paleontological site of Atapuerca is undoubtedly one of the most important and famous in the world, situated some distance from the village itself. The Camino of Santiago does pass directly through the caves of Atapuerca (for this walkers need to take another variant). Leaving Atapuerca can be confusing, as some signals are not as clear as they should be. Hikers should continue on the same road by which they accessed the town and continue almost to the end.

On the left is a statue of a pilgrim. Follow this sign. On a dirt track they leave behind a picnic area on the right. The route climbs steeply upwards. A yellow arrow indicates to the right and another to the left. In between there is a sign prohibiting anyone other than military from passing. There is nothing else in sight.

The pilgrims enter on more comfortable terrain and reach another junction, which can lead to confusion. (Villalval to the left, with a well needed fountain in one kilometre, although the town is further away). A stretch with favourable terrain until to the local road that links the towns of Cardeñuela-Riopico and Orbaneja de Riopico, where the walkers can regain strength before the last kilometres to Burgos. Orbaneja de Riopico has a bakery, a bar with a terrace and a rural house. Upon crossing the rural enclave walkers should turn right and cross a bridge over the railway. Leaving an urbanization on the right until reaching another junction, here the pilgrim must choose how to attack their entrance to Burgos. Some rubbish bins serve as reference.

The most authentic Camino is that which enters through the industrial estate of Gamonal. It is an immense straight of four kilometres, accessed from the outskirts of the airport. Those who choose to go via this route should take into account that it is better to walk on the left, as the pavement is more passable. For those who prefer to avoid these extra kilometres, at the Hotel Buenos Aires, in front of the petrol station, it is possible to catch a bus that leaves the pilgrims at the gates of the city.

While purists advise against this, in recent years the entry into Burgos via the Castañares variant has become more popular. In its favour, the last few kilometres are through a park. Those who chose this route, a kilometre longer than that of Gamonal, on arriving to some refuse containers, should turn left.

The ascent from the Sierra de Atapuerca is really complicated, full of natural ramps. There is a possibility to continue by road. It involves a few more kilometres but on better ground.

Entry to Burgos via the industrial estate is also tricky with heavy traffic. It is worth cycling on the left pavement or at the left side of the road and always with extreme precaution.

In the last stage it is possible to deviate to the right, where they will find a cycle path, which reaches the gates of Burgos. 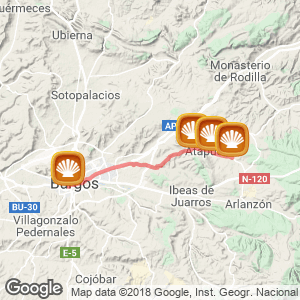