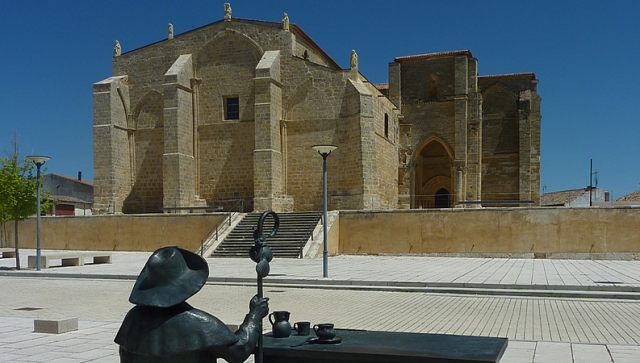 This stage, which does not present any complications whatsoever, advances straight ahead on a good strong track parallel to the road. Walkers will overcome the monotony of the plains through the successive stops at the villages dotted along the ancient route, enclaves that hide beautiful heritage sites such as the church of Santa María la Blanca Villalcázar of Sirga, and culinary secrets for the palate, such as Lechazo (baby lamb) a delicacy of this area. The variant, which departs from Campos and links to the other route in Villarmentero, brings dynamism to the voyage and adds just half a kilometre to the day. In all locations the pilgrims will find catering establishments and seating areas with shade and fountains, things of great comfort during the summer months.

This short stage, which is completed promptly due to a shortage of diversions, begins in the centre of Frómista (426 kilometres to Santiago), from where the pilgrims should continue on the pavement of the long P-980 road towards Carrión de los Condes. After crossing two bridges over the N-611 and A-67 and a few roundabouts (on one of the roundabouts there is a monument to pilgrims), they will begin a monotonous path parallel to the P-980, which continues ahead for three kilometres on flat terrain until reaching the first location of the stage, Población de Campos (16.9 kilometres to Carrión).

The chapel of San Miguel (XIII century), a Romanesque monument with gothic elements, welcomes walkers under the shade of poplars, before entering the enclave, which is accessed by a deviation to the right. In the centre of the hamlet visitors will encounter the baroque church dedicated to Mary Magdalene, inside the baptism basin from early XIV stands out. The pilgrim route passes through the village centre along the appropriately named Calle Francesa (French Street), where they will find a wide range of services.

Among the accommodation possibilities there is the municipal albergue, privately run and situated on the site of the old school, and as an alternative, the complex CRT Amanecer in Campos, a hotel with 14 rooms, here they also offer the possibility of renting a rural house for up to 16 people. In this establishment pilgrims can have breakfast, lunch and dinner, an option also available in the bar Arrabal, which offers sandwiches, snacks and meals. Shops and outside seating areas with fountains are the other handy advantages of this enclave. Before leaving this place, by crossing the bridge over the river Ucieza, the pilgrims also find the chapel of Socorro, twelfth century, and a detour to a small variation on the ancient route, which leaves from behind the church.

The alternative route, more rewarding and not as straight, leads the pilgrims, on irrigated tracks and a wide, paved trail that runs parallel to the rivers course on its right bank until arriving to Villovieco, a small hamlet where the church of Santa Maria stands (XVI century), with a notable altarpiece depicting the Battle of Clavijo. After visiting this temple the route passes in front of a tribute to pilgrims and crosses the Ucieza River, on its bank there is also a picnic area with a fountain. From here walkers Just have to cross the bridge and the path continues along a track that takes a right turn and then continues for a little over a kilometre to Villarmentero de Campos, where it connects with the main route.

Those who opt for the original route should continue straight ahead at the exit of Población de Campos. Cross the river via a bridge and continue for almost 4 kilometres on the monotonous path parallel to the P-980. Just a weeping willow and a small picnic area with a fountain serve to liven up this part of the journey. Hikers then come to Revenga de Campos (12.5 kilometres to Carrión); at its entrance a small pavement complicates the journey for pilgrims.

The road goes through the village without any stopping points, except for a small bar. In terms of the heritage of the town there are various noble houses (in one of them Carlos V once spent the night), a pilgrim statue, the monolith of General Amor (a hero of the War of Independence) and the baroque church of San Lorenzo, situated at the side of the road, with good altarpieces and an interesting portal from the XV century.

After a quick stop, and after passing a cross and a cemetery, the walker returns to the path parallel to the road that will accompany them throughout the stage. Soon they reach the next village Villarmentero de Campos (10.4 kilometres to Carrión), which welcomes walkers with a reviving drinks machine and the private hostel Amanecer, with an outside snack bar attached. Travellers who want to visit the alternative accommodation should deviate to the left from the main street to arrive at the rural tourism centre Casona de Dona Petra.

In the centre the parish church of San Martín of Tours stands out, constructed from adobe and stone, inside pilgrims can admire its mudéjar coffering and plateresque tableau. From here hikers can take the Ucieza River path to visit the chapel of Nuestra Señora del Río, where, according to accounts from this era, the relics of San Martín once reached, one of the most popular saints, seated on a donkey, legend recalls how when they placed the donkey in the church, the bells began to play alone. Now with both variants reunited, hikers say goodbye to the enclave passing a charming picnic area, located under the shade of a pine trees.

After passing another cross, that announces a new Camino parallel to the road, the route continues for more than 4 kilometres until reaching a turnoff to the right with signs that already indicate the arrival to Villalcázar of Sirga (6.3 kilometres to Carrion), one last stop before arriving in Carrión. In this centre the monument of Santa María la Blanca stands majestically dominating over the rest of the village, almost a cathedral and an outstanding example of early Gothic art. Built in the thirteenth century, it houses the image of the Virgin to whom Alfonso X el Sabio sang the Cantigas (a collection of medieval lyrical poetry, written in Galician and Portuguese).

The most spectacular pieces among so many artistic treasures are, besides the other sculptures of the porch and its inside, are the tombs of prince Felipe, son of Ferdinand III, and his second wife and the great altarpiece panel comprising of 27 paintings from the XV century. An inn with Tradition After this artistic visit, pilgrims can take care of their stomachs in the typical establishment (Mesón de Villalcázar) at the foot of this church and after 49 years of service to pilgrims it has managed to carve a niche of honour on the Jacobean route. Its history dates back to the Holy Year of Compostela in 1965, when a section of the path, in the Council of Palencia was replaced in an attempt to give new spirit to the route and also to offer walkers a more personal alternative.

The innkeeper Pablo Payo took the initiative and began to serve pilgrims, providing a jug of wine, a bowl of garlic soup and lots of conversation. While the route was attempting to experience a take off, his meson was seen as perfect model. Paul Payo was appointed mesonero mayor del Camino de Santiago (The most important inn keeper of the Camino) at a conference hosted in the 80s. He later passed away and his children now continue his work, a monument was erected at the front of the inn in his respect as a Jacobean emblem. In his memory there is, a bronze figure of the innkeeper, wearing a coat and the pilgrim hat he always wore to greet the passing pilgrims.

Throughout decades travellers have stopped at this establishment, built upon an ancient grain field, to try its traditional pilgrim liquor (a liquor coffee) and those in the know, can revel in the famous dish lechazo, so popular in Castilla and León, also famous in Villalcázar. Lechazo is a speciality dish of roasted baby lamb, still not weaned. According to tradition it must be roasted in a wood oven. In the centre, very well prepared for receiving pilgrims, they can relax in one of its two albergues or in hostels and rural houses.

In Carrión After leaving Villalcázar the stage continues in a similar way to the rest of the day, on a trail to the right of the road. Hikers will climb a small hill, without notable slopes, to reach, after the descent Carrión. The entrance to the centre is reached after crossing the P-980.

A stage without any complications for cyclists, who can complete the route in just one hour and 30 minutes. 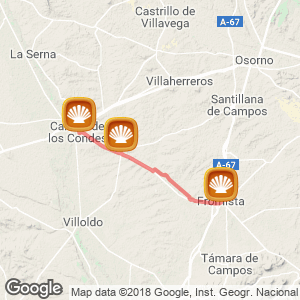