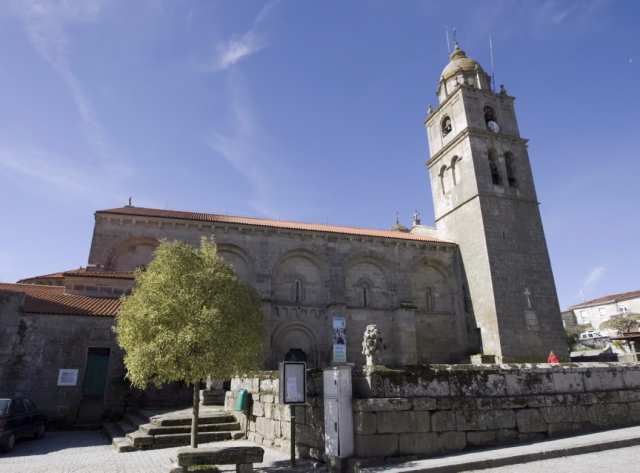 This stage will test the resistance of walkers with a climb up mount A Travesa, one of the most difficult on all the Silver Route. The effort required is compensated for by its stunning views. There are two points on the route where pilgrims will find services, in Alberguería (an albergue and one of the most authentic bars of the route) and in Vilar de Barrio (restaurants and a good albergue).

In the last kilometres and, after a long descent, travellers will pass through a plain, where centuries before, there existed the lagoon of Antela, its waters have since dried up. The goal, with its imposing church of Santa Maria la Real, is worthy of a visit.

The journey begins in Laza, in the square of Picota. From here the route continues on the OU-113, the road that leads to Vilar de Barrio and later takes a turn off to the right, on to an asphalt path, in the direction of Vilamea, Castro and Tamicelas and crosses the river Támega. Immediately after the path arrives once again at the OU-113 road, passes through Soutelo Verde, crosses once more the river Támega and arrives in Tamicelas.

The difficult climb to Alberguería begins

At this point walkers begin a difficult climb of five kilometres up mount A Travesa. With this hard task complete the Camino reaches the road once again (the road taken by cyclists) which, on a slight ascent, leads walkers to Alberguería, an important milestone on the route, founded in the XII century to accommodate pilgrims, this location is now almost completely uninhabited. Currently, it has an albergue and one of the bars with the most personality on this Camino, an obligatory stopping place for pilgrims.

With the climb complete, a milestone situated next to a cross guides walkers to the left, on an earthy path from which the prolonged descent begins. In winter extra care should be taken on certain stretches due to the possible presence of ice.

From here hikers reach the OU-113 road, O Veredo, the OU-114 road and Vilar de Barrio, with an albergue. For those not staying at this albergue the route continues ahead on a stretch shared with the OU-113 to cross Bóveda.

The dried up lagoon of Antela

After a slight climb, walkers reach Vilar de Gomareite and pass along the Lagoon of Antela, dry since the 50s. Reaching Bobadela and Padroso.

Beautiful views before the last descent

After a slight climb comes the last descent of the day towards Cimadevila (the location itself is never reached). Arriving at Quintela and Xunqueira de Ambía.

Cyclists should be careful. From Laza recommendations are to continue the journey to Alberguería on the OU-113 road, on a journey that also requires a great deal of effort.

The ascent on the official route, which begins in Tamicelas and travels through mount A Travesa, is impassable on two wheels. A second route on asphalt is advised to tackle the last climb of the day and this varient goes through Padroso. From this location cyclists are recommended to take the OU-0110. 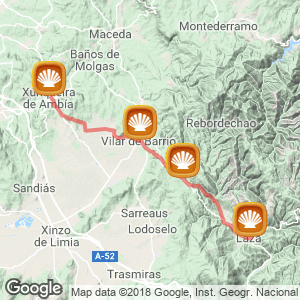