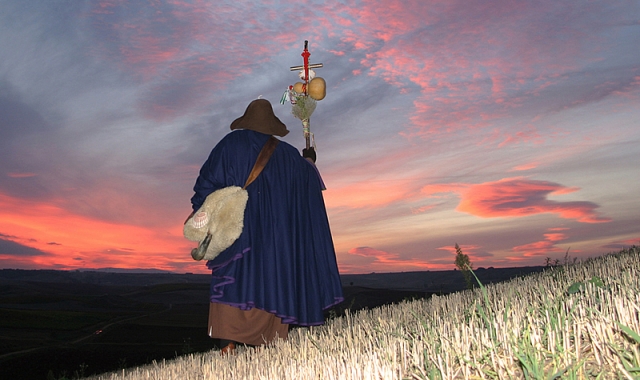 Farewell to Navarra and La Rioja, the land that boasts the best wines in the country. From Los Arcos to Torres del Río the ground is comfortable, however, from this town to the fabulous Viana, the route becomes complicated. A long and constant uphill climb accompanied by steeps slopes on the descent awaits the hikers. Mari, the daughter of Felisa, a legend on the pilgrimage route, welcomes the pilgrims at the gates of Logroño.

Now on the other side of the river Odrón, the way out from Los Arcos is through a residential area passing the last of its shelters.

Along a gravel track with a rising trend, the chapel of San Lázarus and the cemetery are left behind. Soon the path widens and gravel gives way to an earthy track, the track runs parallel to the country road and leads the pilgrims to the right until reaching the vicinity of Sansol. Passing in between, olive groves, working land, and the installations of an electric company, a stone carving of a pilgrim and some attempt of a picnic area, unsuccessful due to a lack of shade.

With less than a kilometre to reach the entrance of Sansol, the route joins a local road and remains on it until reaching the village. Less than a kilometre on a downhill path separates Sansol from the next location on the Camino. On leaving the village, cross the road and continue on its left side for a few hundred yards until reaching a solitary home located on a bend. Here a yellow arrow diverts the pilgrims to the left to a steep slope. Passing though a tunnel, over bridge, and past a fountain, which offers a drink to pilgrims at the gates of Torres del Río.

From Torres del Rio to Viana

On exiting Torres del Río it is necessary to continue the climb. From the moment hikers enter this town the road continues to gain meters above sea level. On the left hand side walkers pass the barn of a hostel and a little later the cemetery, in which there is a fountain.

The path to Viana is uncomfortable. Despite being few kilometres, the geography of the area forces walkers to face a torturous climb and a tiring descent. The ground on the route changes in accordance with the area. For example, on the steepest slopes, asphalt or pavement to provide a better grip and avoid slipping.

Other sections are on gravel. Uncomfortable in some areas as the surrounding vegetation attracts many insects seeking the nectar of its rich fruits. Before reaching Viana it is necessary to cross the road several times. Although the road is not busy, the cars pass at great speed, so caution is necessary. Now on flat terrain, the arrival to Viana is no more comfortable. The path is in bad condition and runs very close to the road.

The route from Viana to Logroño is comfortable and on favourable terrain. The descent begins in Viana itself, situated at the top of the mountain. The merchants of the area have not missed the opportunity to seek the attention of the pilgrims by hanging advertising from the branches of bushes, as though they were apples.

Along somewhat neglected tracks, the pilgrims continue on a passage next to the road where they will find the graffiti of a scallop shell, wishing the pilgrims a good journey. Always on flat ground, the cement gives way to a dirt track. It passes in front of a chapel with a picnic area to then meet with the main road that connects Viana to Logroño.

A walkway allows pilgrims cross to the other side and continue their march to the capital of La Rioja. It goes through a short woodland area, until arriving at an industrial area, which marks the border between Navarra and the autonomous community of La Rioja. After avoiding the road again, this time via an underground tunnel, the comfortable journey continues.

Just before reaching Logroño, Mari awaits the pilgrims below a fig tree that grows in front of her house. This illustrious lady continues the tradition of her mother Felisa, all an institution on the Camino de Santiago.

Continue the descent to Logroño, a great city accessed through a park. After crossing the majestic Ebro, walkers will reach the city centre.

From Torres del Río to the gates of Viana, a very complicated road for cyclists. Hell like slopes, both on ascent and descent. A very narrow path in some areas. Surrounded by vegetation that attracts many insects, for this reason on downhill slopes it is well worth keeping your mouth closed and protecting your eyes with sunglasses. Most cyclists avoid this route and take the road to Viana. The slopes continue, but are not as steep. Also, this road is in very good condition, and does not normally have a lot of traffic.

From Viana to Logroño the ground is comfortable. Cyclist will come to a passage with a small ramp at one side so they can cross over with the bike without having to carry its weight. Those who arrive to Logroño with any mechanical problems have the possibility of repairing their bike just before crossing the river Ebro. The shop, Vini Vidi Bici is well sign posted.

The first part of the stage, on forest tracks is straightforward. Sanso is accessed along the hard shoulder of a quiet road, as it has no pavement. Upon leaving Sansol pilgrims will pass a garage that specializes in repairing any broken farming machinery. 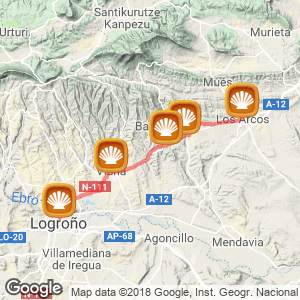