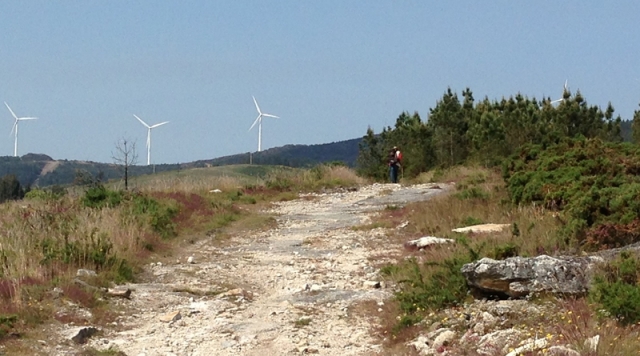 The Camino heads towards one of the most important locations on the itinerary in terms of its historical past, Sobrado dos Monxes. On a slight, but gradual ascent, the route runs through hamlets as it heads towards the province of A Coruña. The lagoon and the monastery of Sobrado are the main references of history and heritage. Of moderate distance (26 kilometres), the journey is not abundant with services and, pilgrims will only come across a few bars on their journey.

The day begins at the church of Santiago de Miraz, next to the albergue. After passing through Portolamas, Devesa and Fontes, the hamlets of Roxica, Cabana and, Marcela, where they will find a small bar (Celia López), they will arrive in the province of A Coruña, at first through the locations of Vilariño and Mesón, at which point the provincial road is abandoned via a turn off to the right, in front of the café-bar Suso. From here the route continues to Esgueva and Muradelo.

There is a very narrow road in A Noqueira, in the parish of San Miguel of Codesoso, very badly sign posted and cause walkers to get lost. A good reference point to look out for is a stilt granary, at the foot of the granary there is another Camino used for carts, very muddy after rain. After walking down this track Laguna de Sobrado is reached. Bordering the reservoir, walkers will come across the Mesón a Lagoa (menu of the day, 8 euros) and, from here they will walk towards the monastic church, affiliated to the albergue of pilgrims.

Before reaching the monastery of Santa Maria, founded in the X century, hikers will pass by the majority of services offered by this location: basic, but sufficient for a well-deserved rest.

The most difficult stretches for cyclists can be found at the beginning and at the end of the stage. The first hurdle is the mountain passed in order to exit Miraz, due to the stones and pronounced bumps at the end of the slope. However, it is a route which can be done by bike, although a little slower than usual. The other inconvenience for those on two wheels is the stretch between Muradelo and Guitiza, due to the narrowness of the path and the roots that invade it. The alternative is to stay on the AC-934 from Marco das Pias until reaching the centre of Sobrado. 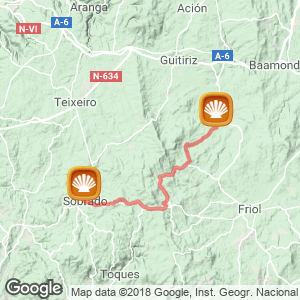