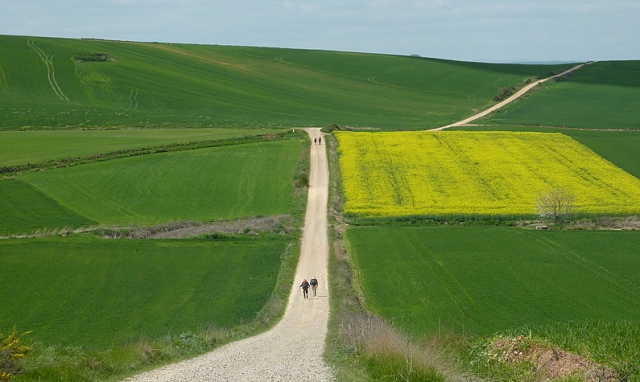 In this easy and achievable stage with moderate slopes (the highest being 255 meters), the hiker will travel primarily along agricultural tracks, and through fields of grain and vines. The inability to find shade in the summer is the only difficulty of this day, almost a stroll. The ancient and pleasant Azofra, for many walkers becomes a perfect resting area, situated about 10 kilometres from next location with facilities.

From this point, and as a highly recommended visit, the pilgrims can deviate from the ancient path and visit San Millán de la Cogolla, birthplace of the Spanish language, from which they will return via another path to join the pilgrimage route a few kilometres later. Despite the extra kilometres, almost 30, this trip will not disappoint the hikers. The final stretch of the day is on a long wavy path, with just one final goal, Santo Domingo de la Calzada, one of the great icons of the Camino.

In this short stage, wheat crops will bit by bit take over the terrain of grapevines, the exit from Nájera (586.5 kilometres to Santiago) is accelerated by the area covered on the previous day. After a long entrance to the town, passing through the majority of its urban centre. The pilgrim takes the first steps behind the monastery of Santa María la Real, a must, reached via the Calle Costanilla, a considerable slope of nearly a kilometre. Now almost outside Nájera and among the impressive red hills at the foot of the mountains that protect the area.

A clay track, still accompanied by vineyards, brings them to Valdecañas, a small stream is crossed to advance immediately afterwards to successive tracks, and for nearly two kilometres down a paved path until reaching Azofra (14 kilometres to Santo Domingo de la Calzada), the first stop in this stage.

This noble Rioja village of Arab origin is nestled in the valley of the River Tuerto. Its development and construction is due in large part to the Camino itself, it is a clear example of village centred on its main road in which the houses were erected on the Jacobean Camino itself. Even today, on calle Mayor, which coincides with the route, hikers will find all the facilities they need for their journey, a pharmacy, grocery shop, a restaurant and a bar with breakfast served from 06.00 am. Until the nineteenth century this enclave had an old Pilgrim Hospital, built in the twelfth century, it no longer remains. Similarly, the cemetery built for pilgrims who died on their way to Santiago has not being conserved.

After re-provisioning conveniently-until the next stop, 10 kilometres in distance and following a visit to the Church of Nuestra Señora de los Ángeles (XVII and XVIII century), with a statue of Santiago the Pilgrim, the route bids goodbye to Azofra and sets off down a path that leaves from small park. It is at this point that those walkers interested in visiting San Millán de la Cogolla, birthplace of the Spanish language and home to the famous and impressive monasteries of Suso and Yuso, declared as World Heritage Sites by Unesco, should deviate from the path and continue the LR-206 road towards Alesanco. After 18 kilometres they will reach their destination.

Those pilgrims who wish to visit to San Millán but without adding extra kilometres have several options. The cheapest would be to travel from Nájera by bus. The bus group Jiménez covers this route and costs 1.72 euros. Midweek times for departure are at 13.20 and 19.00 hours, Saturdays at 08.30 hours, and Sundays at 09.00 hours (there are also the times of return journeys, consult http://www.autobusesjimenez.com/). The stop is at the bus station. They can also visit this idyllic enclave by taxi. Check the times on the link about the town of Nájera. Please note that on Mondays both monasteries are closed. 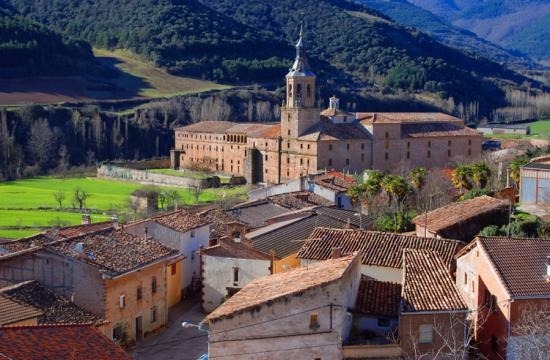 Yuso is open all other days from 10.00 to 13.30 and from 16.00 to 18.30 hours. Entry fees are up to 5 euros and can be purchased at the entrance to the monastery. To visit the other monastery, Suso, reservation is necessary, phone 941 373 082. On arrival tickets (up 3 euros) can be purchased from tourist information (941 373 259), situated on the ground floor of the monastery itself. From the car park at the Monastery of Yuso a microbus departs every half hour, given that access to private vehicles is prohibited, which takes visitors to Suso, one kilometre away. Visiting hours are, in this case, from 09.30 to 13.30 and from 15.30 to 18.00. Following this detour is not necessary to retrace your steps as the road to Villar de Torres (LR-204) reconnects with the path and the yellow arrows in Cirueña. Or continue the route For those who prefer to continue the Camino and not take this detour to the monuments, the route continues along the calle Alesanco, but on the opposite side, on the right.

A symbol of justice, this type of monument originates from the Middle Ages, a period in which small town centres were transformed into important urban enclaves and consequently required a justice system. On this occasion, the sword of Rollo dissuades possible offenders from committing a crime. Bit by bit, and on neighbouring tracks and farm roads, the pilgrim says goodbye to the reddish land and its surrounding cereal fields, which announces the proximity to Castilla. A long path, without resting areas, which in the summer heat without the presence of shade, converts this stretch into any hikers worst nightmare. On this occasion, any seating encountered on the way, is of no use due to a lack of shade. After completing a slight slope of one kilometre, on a gravel path, the hiker approaches what, in the opinion of many experts on the ancient route is one of the biggest attacks on the pilgrimage route. The pilgrim should border around the entrance to Cirueña (6.80 kilometres to Santo Domingo de la Calzada) because of a golf club and an urbanization, which have caused the Jacobean route to move from its original route towards the neighbouring Ciriñuela.

Even then, there are two options, either continue anyway in front of the complex or deviate towards the right and continue to Ciriñuela. Both have facilities to eat and sleep. Those choosing the first option, at top of the slope should turn left, go past a statue paying homage to pilgrims and continue in front of the golf club bar (with a open restaurant, menu of the day and Wi-Fi) in the direction of some chalets.

The ancient route only passes the calle Barrio Bajero Street of the enclave; it is then abandoned after passing the private hostel Virgen de Guadalupe on the left. After reaching a road, the route takes a path near to a roundabout above which there is a tribute to pilgrims, it then moves to a track that continues straight ahead. Those pilgrims choosing to walk to the right in the direction of Ciriñuela will also find facilities to recover strength in this village, such as the private albergue Virgen de las Candelas or the Hostel of same name. Now at the roundabout, and in the company of those who travelled to San Millán and linked with the Cirueña route, the journey continues. 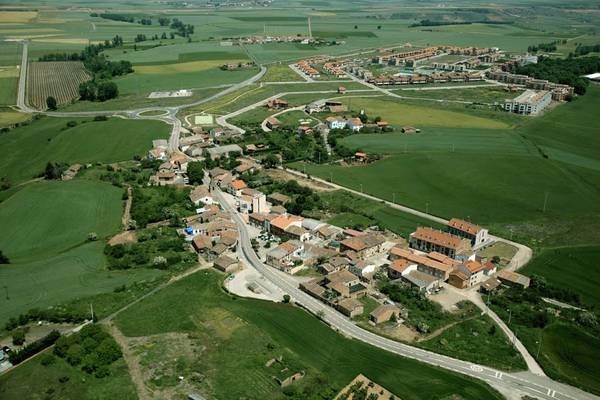 An important place Between progressive and slight curves and always in the company of cereal crops, the route is now clear with no danger of getting lost. Always straight ahead in the direction of Santo Domingo de la Calzada, its silhouette and imposing cathedral can be seen from the plain by the river Oja. A pleasant walk leads to the prologue of this famous place, which is reached after crossing an industrial estate and turning left at a junction with the calle Cirueña. At this point, the traveller will be in front of the football pitch, the symbol of this stadium is a cockerel. Here the importance of the Jacobean miracle is sensed and subsequently discovered in this small town. After turning left and proceeding along the calle Mayor and Calle 12 de Mayo, the hiker will arrive at the hostel.

The gentle terrain makes this stage an easy one for cyclists who also have the option to visit San Millán de la Cogolla. If they choose to visit this monumental enclave they will cover a total of 55 kilometres in this stage. 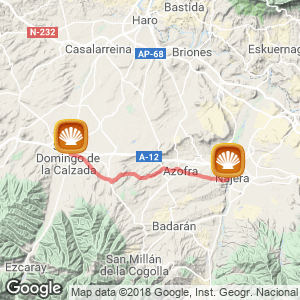