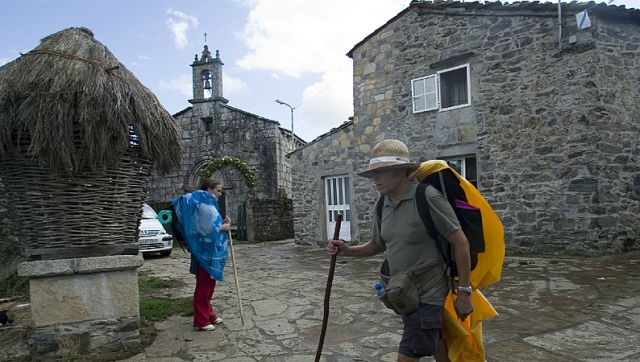 The pilgrims bid farewell to Palas de Rei from the N-547 in the direction of Santiago. The road is abandoned for a few meters to take a small detour to the right following the signs for Curuxas. A short distance from the route, a majestic house perched on the banks of the river Ruxían and a small but carefully maintained Riverside walk stand out. After re-joining the road, the Camino deviates to the right in the direction of Carballal along a demanding slope, passing through the Hamlet of Riba to descend back down to the road, which is reached on its left side. A path indicated by a milestone leads through a forest to San Xulián do Camino, a very pretty stretch. The only possible inconvenience is that in periods of heavy rain, puddles can form, forcing the hikers to either, wade through water or to dodge around the treacherous fences guarding the surrounding plots of land. San Xulián do Camino is a small village with a historic cobblestoned area where a stone cross, in the heart of the centre stands out, as well as the church, founded in the XII, although it was substantially transformed in XVIII. According to legend, in ancient times this enclave had a pilgrim hospital, managed by the soldier Julian and his wife.

By accident, Julian killed his parents and as penance setup the hospital to care for the pilgrims. One day he received a visit from an angel announcing his forgiveness. The private hostel O Abrigadoiro serves breakfast and lunch. Just before leaving the village the pilgrims encounter Castillo del Lobo, a peculiar craft shop that also offers Japanese shiatsu massages. Further ahead, the walkers come to a badly signed junction, here they should continue straight ahead. The asphalt gives way to a dirt track and after a short descent it joins a road. On crossing the river Pambre the walkers reach Pontecampaña, where they will find the private hostel Casa Domingo. Its foundation conceals a curious history. The daughter of an immigrant came here to know her origins and fell in love with a local resident. Together they decide to restore an old house, which since 2002 has functioned as a hostel. From this point one of the most spectacular stretches of the stage begins, passing through exceptional stone cobbled lanes, even cyclists will not mind having to dismount. Nature lovers, travelling with cameras should prepare themselves to shoot at will. Through Leboreiro and Disicabo On this beautiful track they reach Casanova, where some manor houses stand out.

In Casanova there is a public hostel, from here a tough slope begins, and leads to another private hostel, (A Bolboreta) which also functions as a rural house. Soon begins a descent to the river Porto de Bois. Once at the river bank the Camino gains altitude until reaching A Campanilla, and later to O Coto, where a milestone informs the pilgrims that they have just set foot in the province of A Coruña. At the end of the track, on the left, is the hotel-restaurant Die Zwei Deutscher (The two Germans). On a kind type of service road, parallel to the eternal N-547, the Camino passes in front of a grocery shop, ideal to replenish supplies, the cafe A Taberna and the rural tourism house Casa Somoza, where every breakfast feels like a party. On sunny days, two lazy dogs are normally found stretched out on the path, forcing pilgrims to walk around them. As indicated by another milestone, the pilgrims abandon the road. A path on the left leads to the picturesque hamlet of Leboreiro.

Leboreiro is one of the most spectacular hamlets on the stage. Its name derives from the land of (liebres) hares. Its stone ground leads to a cross and a few meters ahead, on the right, the church of Santa María (S. XIII), declared a monument of cultural heritage by the Ministry of Culture, inside visitors can see its stunning murals. Just outside there is a peculiar cabazo (a granary store) similar to a horreo, a small building usually on stilts, used protect grain and other foods. In some areas of Galicia, and along the coast of Lugo, granary stores are still called cabazos. In medieval times Leboreiro also had a pilgrim hospital, founded by the noble family Ulloa. Legend has it that close to the church there was a fountain, which would mysteriously light up at night. The locals suspected that there was something magical hidden in the ground below, armed with tools, they dug up the ground and found the image of a virgin, which was brought inside the church. However, each night, the image returned underground. Day after day the same occurred until a local artist carved an image in the church, from this moment on the virgin decided to settle inside the temple. After crossing the small village of Disicabo the walkers reach Madalena, where the restaurant Terra de Melide is situated.

To reach the establishment walkers have to deviate a little from the Camino but it offers a variety of dishes and opens from 7 to 0.00. A little further ahead is the main eyesore of this stage, as the pilgrim are forced share the route with the rushing traffic of cars and delivery vehicles travelling to and from an industrial estate. Yes, the Camino of Santiago passes through the heart of an industrial estate. At the edge of the path there has been a rushed attempt to lessen the impact on the pilgrimage route, but the surrounding environment is so bleak that they have only succeeded in making it worse. The stone fountains, milestones and shrubs in honour of the pilgrims look completely out of context. When leaving the industrial estate, the walkers should continue on a stretch parallel to the road from which Melide can be seen and from which they can deviate on a path to reach Furelos, another magical enclave.   Furelos A bridge of four arches. An area of expert fishermen.

A church protected by a wall. Museum Furelos no Camiño (appears closed). An emblazoned house with the shield of Caamaño. Taberna O Farrucos. Cobble stone path, which transforms into gravel to ascend to Melide. Melide Walkers descend down a narrow earthy path that leads to the national road. At the other side of the road a deviation route appears with a number of signs for the CP-4603. 300 meters later, walkers should turn right towards the Santa Maria de Melide, a small historic hamlet at the foot of the Camino. Santa Maria de Melide, with its Noble paved area, has a fabulous Roman church with two spectacular facades and painted murals inside, the latter dates back to the fifteenth century. Lovers of architecture will be amazed at the detailing that emerges from this temple. After crossing the creek of San Lazaro, now on a semi asphalt path, they leave on the right a washing area and continue walking on uneven ground until reaching Carballal.

Later, and now on a wider path protected by a combination of native trees combined with pine and eucalyptus trees, they cross the Raído river over a narrow granite walkway which pilgrims should take in single file. The Camino touches the road once again over a short stretch and deviates until arriving in Parabispo, the first location in the council of Arzúa. On the left they will find a curious stall, unattended and self-service. Fruit, coffee, cake ... everything has its price. It is all down to the goodwill of the traveller, who should deposit money into a piggy bank. Water is the only exception, "Very good" and free. There is also a device to stamp the credential. The Camino then moves upwards to Peroxa, which forms part of the parish of Boente. Boente is a hamlet divided in two (Boente da Riba and Boente da Baixo) by the national road. In Arzúa, the capital of the area, the residents of Boente are famous for producing the best local cheeses, which, as a result, has given it a reputation for being one of the areas with the most delicious cheeses in Spain, which in turn, is a country rich in cheese. Strangely, directly obtaining cheese in this village is no simple feat, since most of the houses that continue to produce this delicacy do so for their own consumption. Perhaps a local resident may provide information about a house with an excess of cheese. On leaving the cafe El Aleman (which also offers food), the path that passes Boente da Riba leads to a stone cross and the Fonte da Saleta, now at the foot of the road.

A little further ahead is the private hostel Boente, which has an inside terrace and offers a menu of the day. A few meters ahead, a little further from the pilgrimage route the private hostel Os Albergues appears. At the other side of the N-547, and also, now in Boente da Baixo is the Igrexa of Santiago. Ribadiso, near from Arzúa On the Camino the steep descents and violent ascents continue until reaching Brea, its stream, contaminated by some huge metal cylinders, is clearly in the process of oxidation. The route continues up hill until reaching a paved falsely flat area where the coffee bar No Camiño, with a terrace is located. Shortly after, following a signed deviation to the left, the walkers arrive to Castaneda. This location is famous for its lime kiln, where pilgrims deposited the stones carried from Triacastela, thus contributing to the construction of the Cathedral of Santiago.

(Chapter III of book V of the Codex Calixtinus) Upon entering Castaneda the walkers leave on the right the private hostel Santiago, which also functions as a café-bar and has a great terrace. A few meters ahead they will find Casa Milia, a tourism house. Continuing the road they descend to the stream Ribeiral, from this point the terrain steepens. In full ascent, a wooden sign embedded in a tree indicates a detour to the rural house Casa Milia, after a ramp on the right hand side, a second sign informs the pilgrims of the presence of the guest house Garea House Bar, accessed on a path surrounded by eucalyptus trees. In ascent the pilgrims cross the road via a bridge and, after a small stony stretch begin the descent to Ribadiso, another magical enclave of the day, its hostel is the ideal place to stay the night. Saying farewell to Ribadiso is doubly painful. Firstly, pilgrims leave one of the most magical centres of the route. Secondly, their legs will suffer the eternal ramp to the N-547, which is reached after a short detour, in the opposite direction of the vehicles heading in the direction of Arzúa. After passing a group of houses, the Jacobean route runs parallel to the road. At the other side there is a service station, where, those arriving on reserves can refuel before reaching Arzúa, less than a kilometre away.

Cyclists face a simple stage. It can become complicated in times of heavy rain, because they pass through areas of soft terrain, which may form muddy puddles. There is a steep slope from Ribadiso to Arzúa. Many cyclists, on arriving at this point prefer to continue on the main road until reaching Santiago. This is strongly discouraged. Besides the danger that sharing the road with vehicles entails, those sticking to the asphalt will not have the opportunity to know the magical hamlets in Galicia. 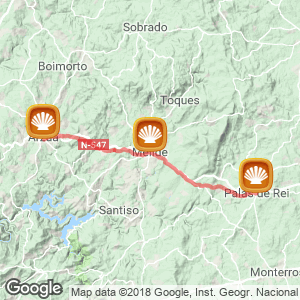