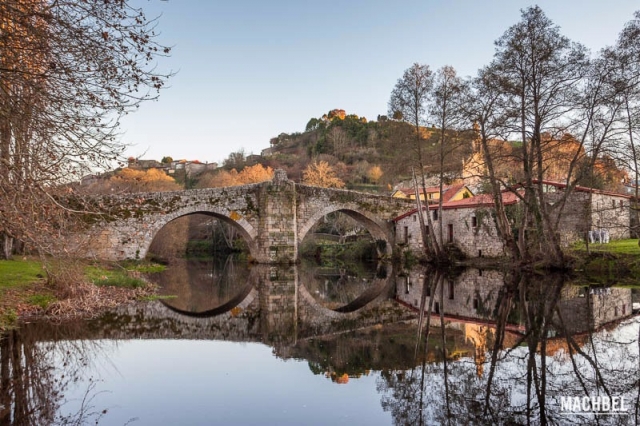 This day’s journey is one of the least enjoyable on the silver route. With the exception of some stretches, such as, two beautiful descents that respect the historic route along which, San Salvador dos Penedos and the hamlet of Paicordeiro are reached, the majority of the journey is done on the road. The goal Allariz, serves as compensation.

The day begins in the albergue of Viladerrei, in the direction of Trasmirás, on the pavement of the N-525 road. This road joins the OU-1106, towards Chamusiños.

After a climb, taken on the right hand side, walkers reach a long track that crosses some fields; this area is likely to become muddy after periods of heavy rain. Hikers will later reach four turn offs, two leading to earthy tracks and another two onto local roads. The route however, continues straight ahead until arriving at the milestone (158,325), which leads walkers to the right in the direction of Zos.

After passing three turn offs to the left and one on the right, another track is reached and continued for over two kilometres. From here pilgrims pass three junctions and continue straight ahead until reaching the milestone 155,421 where they should turn right and head towards a potato factory. At another crossroads they should turn left, the route, now on asphalt, leads to a dangerous junction with the N-525 road. Having crossed this junction the Camino continues, on asphalt, on a comfortable track that crosses the river Limia to, meters later, cross the motorway via an underpass. Hikers reach Boado turn left and at another junction, with the milestone 153,991, continue ahead. Pilgrims continue along this road, pass over the motorway and cross the N-525.

Xinzo, one of the capitals of Galician Carnival

Walkers continue straight ahead until reaching a junction with the OU-304 road, well signposted, and arrive in Xinzo de Limia, one of the Galician locations that, forms part of the magical triangle of carnival. The route heads down the streets of Rosalía de Castro, avenida de Madrid and, at a roundabout turns left towards Vilar de Santos and Celenova, in the direction of the OU-531 road. At another two roundabouts, walkers continue straight ahead to reach the OU-531 and Vilariño das Poldras. From here hikers arrive at the OU-1116 and to O Couso da Limia.

Hikers arrive in Sandiás, a location with sufficient services and where pilgrims can stop at the albergue situated at the entrance. The itinerary however, continues and Allariz is still situated some 12 kilometres away by road. From here walkers pass the church of San Esteban (XVI century) and the Tower of Sandiás and will now be able to see the dried up Lagoon of Antela. Arriving to Piñeira de Arcos, Pegas do Cotorro and Coedo, which is not entered. Pleasant tree lined stretches  Now back on the official route, the journey continues on an earthy track, on one of the most beautiful stretches of the Camino to Torneiros. Some of the milestones on the route are damaged and difficult to read. For this reason it is worth paying attention to the signs. This track leads to another path of asphalt and the milestone (133,933) from here walkers turn left in the direction of San Salvador.

Artistic jewel and the beautiful descent to San Salvador 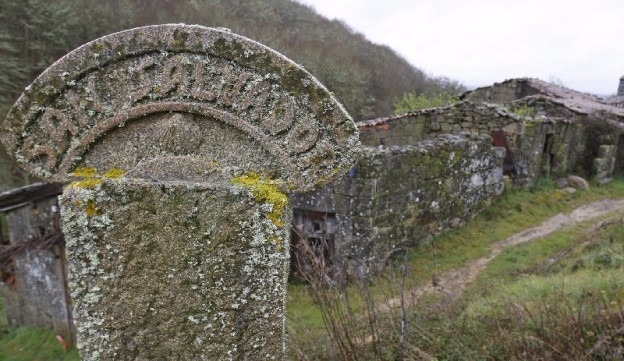 To avoid confusion walkers also have the option of continuing from Torneiros on asphalt, this route is taken before reaching San Salvador dos Penedos. Another wonderful path takes walkers down to Paicordeiro, a little over one kilometre from Allariz.

This stage will not cause any difficulties for cyclists as the majority of the route on asphalt. 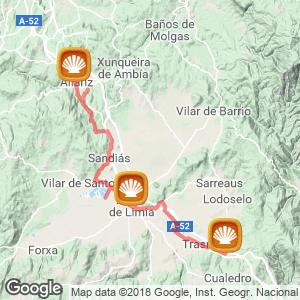