Brother of the Apostle John, he belonged to the group of disciples closest to Jesus and was one of the first martyrs of the Catholic Church 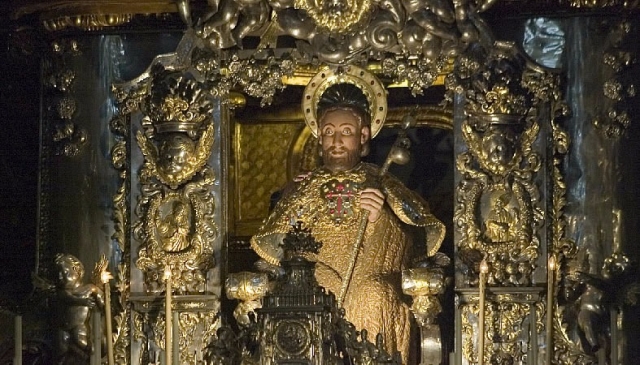 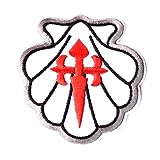 In the Bible he was commonly referred to as James, a name that derives from the Latin name Iacobus and led to other names like Iago, Tiago and Santiago (James) (Sanctus Iacobus). Santiago son of Zebedee or James the Greater was one of the first disciples to shed his blood and die for Jesus. Member of a fishing family and, brother of Juan (John) the Evangelist, both were nicknamed “Boanerges or”(” Sons of Thunder”), for their impulsive temperaments – James was one of the three disciples closest to Jesus Christ, the apostle was not only present at the two most important moments in the life of the Christian messiah, namely the Transfiguration on Mount Tabor and the prayer in the Garden, but he was part of the core group that witnessed his last miracle, his apparition and resurrection on the shores of Lake Tiberias. After the death of Christ, Santiago, passionate and impetuous, formed part of the initial group of the early Church of Jerusalem, in his evangelical work he was awarded, according to medieval tradition, the Spanish mainland, more specifically the Northwest region, at that time known as Gallaecia. Some theories suggest that the Saint of Spain came to the northern lands via the uninhabited coast of Portugal. Others, however, others believe he travelled through the valley of the Ebro and on the Roman Cantabrian road and, there are even some who suggest that James reached the peninsular through Cartagena and, from there continued his journey to the western corner of the map.

After taking on the seven apostolic men, who were ordained by the bishops of St. Peters in Rome and received the mission to evangelize in Hispania, the apostle James returned to Jerusalem, according to Apocryphal text, to join the great disciples of Jesus and to accompany the Virgin on his deathbed. There he was tortured and beheaded in the year 42 by the order of Herod Agrippa I, the king of Judea. Alleged testaments relate that, before his death, Mary received a visit from Jesus, who asked to spend his last days surrounded by the apostles, who could be found dispersed all over the world. Her son allowed her in person, through miraculous apparitions, to inform the disciples and, in this way, the Virgin appeared, on a pillar in Zaragoza to James and the Seven Men, an event revered today in the Basilica of Our Lady of Pilar.

It was these seven disciples, who according to legend, after escaping under the cover of the night, moved the body of St. James by boat to Galicia, where they arrived through the port of Iria Flavia (now known as Padrón). The Boys deposited the body of their master on a rock-that sank and closed around his body, forming a Holy Sarcophagus – then went to visit the Queen Lupa, who at that time dominated from her castle, the land where Compostela now sits, and ask the powerful pagan monarch for land to bury the body of Santiago. The queen accused them of committing the sin of arrogance and sent them to the court of King Duyos, an enemy of Christianity, who imprisoned the men. According to tradition, an angel – in other stories, a bright and starry light- freed the seven men from captivity and, in flight, another miracle killed the soldiers who were running after them while crossing a bridge. But it was not the only setback faced by the Boys. The oxen used by the Queen to lead the carriage that transported the body of Santiago to Compostela turned out to be wild bulls, however, also miraculously they became tame alone along the journey. Lupa, stunned by such episodes, gave in to the Boys and converted to Christianity, she ordered the demolition of all the places of Celtic worship and allowed her own palace for the burial of the Apostle. Today, in its place stands the Cathedral of Santiago.

It was not until eight centuries later, in 813, when a hermit named Paio alerted the bishop of Iria Flavia, Theodomir, of the strange and powerful light of a star that could be seen on Mount Libredón (from here the name Compostela derives, Campus stellae, ” field of Stars“). Under the bush, at the foot of an oak tree, an altar with three funerary monuments was located. In one of them a decapitated body with his head under his arm was found. Beside him, a sign read, ” Here lies James son of Zebedee and Salome.” The religious man, by divine revelation, attributed the skeletal remains to James, Theodore and Athanasius, the two disciples of the Apostle of Compostela, and reported the discovery to the king of the Galician-Asturian kingdom Alfonso II El Casto who, after visiting the place, appointed the Apostle patron saint of the kingdom and built a church in his honour. The news soon spread throughout Europe about the existence of the Holy Galician Sepulchre and the Apostle Santiago became the great symbol of the Spanish Reconquista. The King of Asturias was just the first of many pilgrims who came to Compostela to do the Camino Santiago.

The authenticity of the remains of the apostle Santiago has generated, however, more than a few heated debates and meticulous research. The unthinkable transfer – for the difficulty it entails- of the body of the disciple of Jesus to Galician soil is just one of the many gaps in a story that moves between historical accuracy and magical legends. Archaeological studies have shown that Compostela was a pre-Christian burial site, but scientific tests were never conducted on the remains that are guarded by the walls of the Cathedral to the point that some researchers have even attributed such bone relics to Prisciliano of Avila, the Hispanic bishop accused of heresy. However, the history of the bones of the apostle does not end here. Once discovered and honoured with the construction of a Christian temple, the skeleton did not remain still for long. According to oral tradition, in the XVI century the relics had to be hidden to prevent them being taken by pirates who at that time threatened the city of Santiago after disembarking at the port of A Coruña (May 1589). Excavations carried out at the end of the XIX century, after having misplaced the remains of Santiago, revealed the existence of a secret hiding place in the apse behind the main altar, but outside the tabernacle that the disciples had built 99 centimetres in length and 30 in width, where they hid, and were later lost for years, the bones of the Apostle. In 1884 Pope Leo XIII officially recognized the second findings.