The Pilgrim's Mass is a liturgical ritual that is celebrated every day at 12:00 PM in the Cathedral of Santiago and in which the pilgrims who have claimed their compostela in the last day are welcomed. 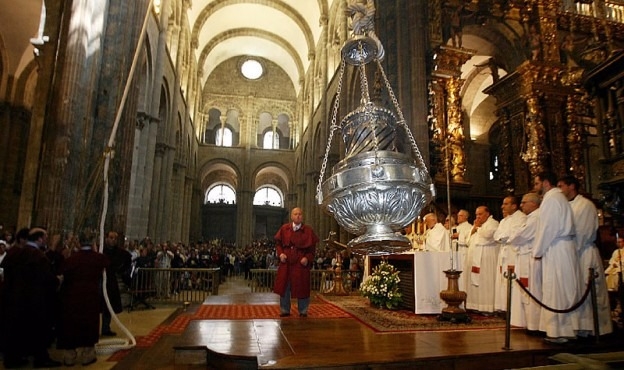 Voo do botafumeiro / @ Xoán A. Soler

The Pilgrim’s Mass is officiated every day at the high altar of the cathedral of Santiago at 12:00 PM As a symbol of welcome, at the beginning of each celebration there is a reading to list the pilgrims who have arrived in Santiago and that have claimed their Compostela within the last 24 hours. Besides their name they also indicate their nationality and the place from which each pilgrim began their pilgrimage. Traditionally walkers of the Camino de Santiago dedicate their time in the mass for pilgrims to give thanks to God for the experience of their adventure and for having reached the goal.

Currently there are four shifts to attend the pilgrim's mass, all celebrated in the High Altar of the Cathedral. Although the most traditional time is 12:00, it is also the busiest, so it is not a bad idea to consider the other shifts. In the morning there are three shifts: at 7:30, at 9:30 and the famous mass at 12:00. Another one is held in the afternoon, at 7:30 p.m., and all of them include the reading of the pilgrims who have arrived in the previous 24 hours.

During saint years, (when July the 25th falls on a Sunday) the greatest symbols of the cathedral of Santiago come into action, the popular botafumeiro (thurible or censer). The botafumeiro (a huge incense burner weighing 53 kilos and 1.5 meters in height) is made of silver plated brass; a contraption requires the attention of eight specialists to swing it in the interior of the cathedral. Suspended 20 meters high with a pulley system, it reaches a speed of 68 km/h. 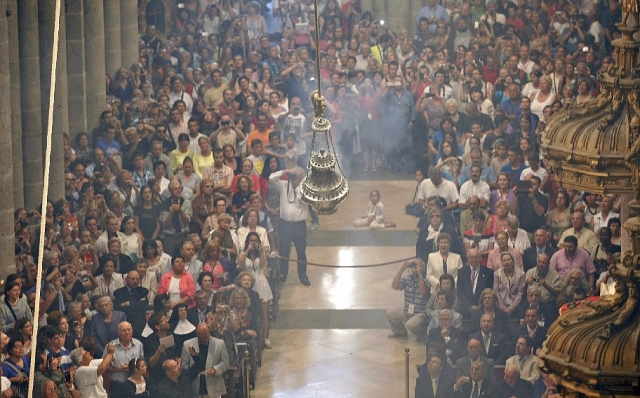 The usage of the botafumeiro (Thurible magnum) was mentioned in the Codex Calixtinus. It was used as a purifying element to combat the crowds that gathered inside the temple. During the mass the Apostle’s Anthem is played on baroque organs, it begins after the Eucharist. This relic, once full of charcoal and incense exceeds 100 kg, only a few accidents have been recorded over its long history. On July the 25th in 1499, with the presence in the temple of Catherine of Aragon, it went flying and crashed against the door to Praterías Square. In 1622 the rope that holds it snapped and it fell on the floor, and in the XX century it fractured the ribs and nose of a pilgrim who had come too close.

On non Jacobean years the tradition of the botafumeiro only occurs on days like Epiphany (6th of January), Easter Sunday, the Ascension of the Lord, the Apparition of the Apostle in the battle of Clavijo (May 23rd), the day of Pentecost, the day of martyrdom of James or Santiago (July 25th), the Assumption of Mary (August 15th), the feast of All Saints (November 1st), the day of Christ the King, the Immaculate conception (December 8th), Christmas Day (December 25th) and the day of the transfer of the remains of the Apostle (December 30th).

During 2013 the council of Santiago reached an agreement with the Association of Hoteliers and the Cathedral so that during the summer months, on Fridays the botafumeiro would also be used in the mass that takes place at 19.30.

If none of these dates is viable, visitors also have the option to enjoy the spectacle of the Botafumeiro by requesting it in advance at the Pilgrim Office, this options assumes a cost of 300 euros.