The records of the Camino de Santiago: The evolution in numbers

October 2018 has set a new record for the Camino de Santiago with 317,000 compostelas delivered: how has evolution been in recent years? 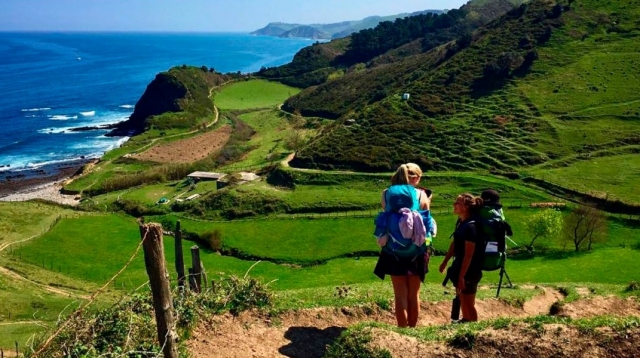 How has the Camino de Santiago evolved until today?

Only a few days ago we knew the news that the Camino de Santiago 2018 had only needed ten months to beat the number of pilgrims of all 2017. It was the end of October and 317,000 compostelas had already been distributed to Santiago pilgrims - in the absence of two full months to take the new record even further - far exceeding the figures of 2017, which remained "only" 301,036 pilgrims.

The Camino de Santiago proves to be an unstoppable mass phenomenon every year, whose claim capacity seems inexhaustible. The influx of pilgrims has grown more than 45% in the last eight years, a vertiginous growth that is noticeable not only in the crowded French Way, but in many other routes until now less present among the options of the pilgrims, such as the Northern Way or the Primitive. Observing the good data of the last decade and with the next Holy Year already on the horizon, everything indicates that the numbers will continue to grow. Will the 500,000 pilgrims reach the expected Xacobeo 2021? Some already suggest that this will be the case.

To better understand the evolution and growth of the Camino de Santiago, taking advantage of the new milestone reached a few days ago, we wanted to take a look again at that large statistical database of the Jacobean Route, which is the Pilgrim's Office. From the data collected by this institution dependent on the Cathedral of Santiago can draw some interesting conclusions; we have focused on three key points of view: the evolution of the Camino de Santiago since 2004 and the coup d'état of the holy years, the increasing equality between men and women and finally, the boom of the Camino among the pilgrims foreign. 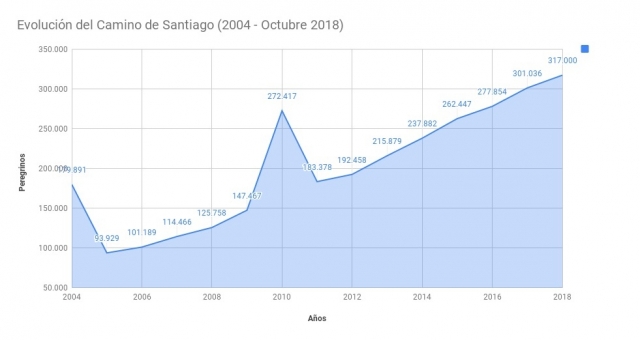 The holy years, an engine for the Camino de Santiago

Many will remember Pelegrin, the famous mascot work of Luís Carballo for the Xacobeo 1993. The Jacobean Holy Year celebrated on that occasion is considered the first "modern Xacobeo", for the organization, planning and tourist-cultural claim effect that he had in the pilgrims from all over the world. In the years immediately before Xacobeo 93, the Camino received a remarkable international exposure thanks to recognitions such as the appointment as the first European Cultural Itinerary (1987) or to be considered as World Heritage (1993).

The graph above shows the enormous impact of the celebration of a Jacobean Holy Year on the annual numbers of the Camino de Santiago, which sometimes doubled the figures for the year immediately before. The previous Xacobeo, celebrated in 2010, gave a huge impact on the Camino de Santiago, with 85% more pilgrims than in 2009. When the next Jacobean Holy Year arrives, in 2021, it will have been 11 long years, since we we find in the longest part of the cycle 6-5-6-11 that rules when the Xacobeos are celebrated; for this reason it is foreseeable that the impact in 2021 will be even greater because of the long and infrequent wait. This is one of the reasons why it does not seem unreasonable to think about overcoming the 500,000 pilgrims in 2021. 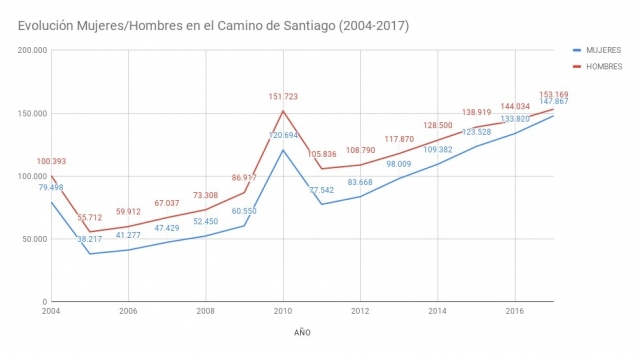 Every year greater parity between women and men

In recent years, in months such as June, July or August, equality has sometimes led to an imbalance on the side of women, who have become the majority. Be that as it may, the Camino de Santiago in annual terms each year tends more to parity between the sexes, as indicated by the last total numbers to which we have access, those of 2017. In this year 51% of pilgrims were men and 49 % women.

Although the influx of people of Spanish origin has always been affected by the celebration of Xacobe years, as we see in the graph above, this religious event has had little impact on foreign pilgrims. The growth of pilgrims from outside our borders has followed a much more constant and progressive evolution, at least until 2012, when there is a great acceleration.

The parity between Spaniards and foreigners in the Camino de Santiago has been a constant in the last 15 years, nevertheless in the last five a definitive takeoff is appraised; In 2012, the popularity of the Camino outside our borders has grown enormously, so much so that the difference in 2017 was above 35,000 pilgrims. Without a doubt we have to look at the popularity of the Camino outside of Spain to be able to explain the great success of the phenomenon in the last 5 years.