When did the Camino de Santiago begin?

The Camino de Santiago is one of the most popular pilgrimages today and is chosen by thousands of pilgrims every year, however, do you know its history? We tell you when it originated and the most relevant events it has gone through throughout its history

What is the origin of the Camino de Santiago?

James was one of the 12 apostles of Jesus Christ. Although in his name it was actually Jacob, we now know him as Santiago by the derivation of his Latin name Santus lacobus. Some time after the resurrection of Jesus, Herod Agrippa I, who at that time was the King of the Jews, ordered the assassination of James in Jerusalem, who was beheaded becoming the first martyred apostle. According to tradition, the remains of the apostle were recovered by his disciples Atanasio and Teodoro, who embarked with them towards the Iberian peninsula.

After 7 days of crossing, the disciples of the apostle Santiago, arrived at the port of Iria Flavia in Galicia to be able to locate the tomb of the apostle there. After encountering different situations of danger, they finally reach the forest of Libredón where they decided to bury the apostle.

The story of the transfer of the apostle to Santiago de Compostela is collected in the Calixtino codex. The Calixtino codex is the book that recounts the data of the translation of the body of the Apostle Santiago from Jerusalem to the Galician lands, as well as how his disciples stole his remains to be able to bury him and thereby make Santiago a center of pilgrimage.

When did the Camino de Santiago begin?

In the ninth century, the Bishop of Iria Flavia was informed that a star had landed in the forest of Libredón. This bishop, called Teodomiro, approached that place and discovered there, the tomb of the Apostle Santiago. After this great discovery, the bishop informed the monarch who ruled at that time, Alfonso II, who was in Oviedo. Given the importance of the news, the monarch himself moved from the place where he was to be able to verify with his own eyes that this fact was true, being the first to make a section of what we know today as the Primitive Way and becoming, by chance , on the first pilgrim of the Camino de Santiago.

Once he made sure of the discovery of the remains of the Apostle, it was when the Camino de Santiago was created since the monarch himself ordered that a sepulcher be built in that place so that anyone who wanted it could worship him, starting from that moment pilgrimages from all parts of Spain and much of Europe.

With the news covering more and more places and the tomb already built, many people visited the Apostle's tomb daily to show their respects. However, it was not until the conqueror Charlemagne got the roads leading there much safer, that the number of visitors began to rise significantly.

The consolidation of the Camino de Santiago

During the eleventh and twelfth centuries, there was a context favored by demographic growth, climate improvement, prosperous trade, the advance and increase of agricultural production, and a peaceful environment in terms of politics, thanks to the Peace of God. The pilgrimage to Santiago de Compostela saw here a great opportunity, and that is how it became one of the three great pilgrimages that exist.

The devotion to Bishop Santiago spread so that pilgrims from all over the world, such as France, Flanders, Italy or England, visited the city. The consequences of this affable situation were diverse: the authorities established regulations to protect pilgrims, among them the order of Santiago was created, whose objective was to protect pilgrims. Kings and nobles improved the roads along the Camino, built a large number of bridges, and founded hospitals in their path. In this period the first written guide of the Camino de Santiago "Liber Peregrinationis" was also produced as part of "Liber Sancti Iacobi", where the French routes to cross the Pyrenees and continue the trip to Compostela are described. 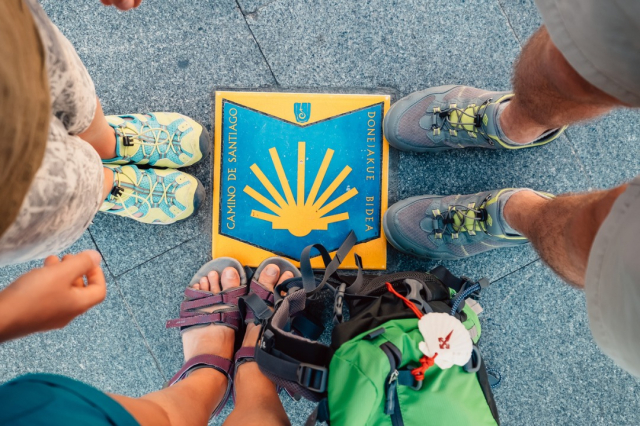 The heyday of the 13th and 14th centuries

The Camino de Santiago became a popular phenomenon at that time, in fact it was compared to the pilgrimage that Muslims made to Mecca. The pilgrims made the pilgrimage to Santiago with a different feeling, they evolved from a feeling of faith to a remission of sins or fulfillment of vows. In this period very prominent personalities traveled such as Francisco de Asis in 1214, Jean de Brienne, King of Jerusalem in 1224, King Sancho II of Portugal in 1244, etc.

The traditional use of the scallop shell as an icon for pilgrims was on the rise, as it was used for different types of pilgrimages. In addition, the tradition of creating pilgrim brotherhoods from a city that had been in Santiago de Compostela began, however, it was popular in French, Dutch, German, and English cities, but not in the Hispanic kingdoms. There was also the arrival of the "English Itinerary in Verse", the first guide that came after the previous "Liber Sancti Iacobi"

Throughout the fifteenth century, along with the popularity of the Camino de Santiago, new types of pilgrims began to emerge, different from those of previous centuries.

One of the classic pilgrimages at that time were chivalrous. Typical in European nobles, in which they traveled with an entourage and had the objective of knowing foreign territories and revealing their value in the tournaments they encountered. The delegated pilgrimages, were another type of pilgrimages at that time, consisted of undertaking the Camino in the name or on behalf of another person. This last type gave rise to the so-called forced pilgrimages, very common in the Netherlands and in the French and German empires, which were imposed by courts as a civil penalty.

In 1434 the first Santiago Jacobean Year was celebrated, which meant a notable increase in the number of pilgrims. The Hispanic kings adopted the custom of visiting Compostela in these years and established numerous protections for pilgrims.

The crisis of the Camino de Santiago

However, it has not been a journey of roses, since two major crises happened throughout history. In the sixteenth century and throughout the first half of the seventeenth century, several factors occurred that caused a profound crisis, such as the qualitative decline of pilgrims, that is, the pilgrims who made the Camino by faith disappeared, as they were replaced by those who did so by sentence of a court or on behalf of another person in exchange for money. The other factors were the appearance of the prosthetic theology and the warlike conflicts that developed in France.

With the arrival of the French Revolution, the Camino plunged into another deep crisis, until it almost disappeared in the middle of the 20th century. The fascination that Compostela had exerted on Catholics was lost, and the wars that were going on in Europe complicated traffic on the roads. Due to the warlike conflicts and therefore, to the isolation that Spain lived, it influenced that all the pilgrims were peninsular. 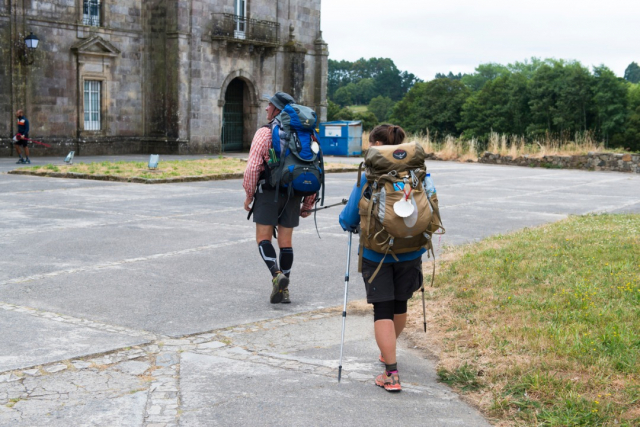 In 1884 the Camino de Santiago returned to have great popularity

The popularity of the tomb of the Apostle grew more and more with the passing of days and in just a century later thousands of pilgrims from all over Europe made long journeys to visit it, thus beginning the beginning of pilgrimages to Compostela. This influx of pilgrims caused both the clergy and the noblest families to adapt the old Roman roads and roads, and build bridges, hospices and hospitals where pilgrims could access. Parallel to the adequacy of the roads and areas of the Jacobean route, the tomb was evolving and increasing until we became the one we know today, the Cathedral of Santiago de Compostela, which achieved its greatest splendor in the 12th century.

However, when the fourteenth century arrived the number of pilgrims and the popularity of the Camino de Santiago declined, due to the economic and political problems of the time. This fact worsened with the crises and wars of the following century, and although some time later they were able to recover some popularity, new scientific discoveries negatively influenced him.

It was not until 1884 that the Camino de Santiago returned to have great popularity, when Pope Leo XIII declared that the remains found were really those of the Apostle and the Jacobean route was named as a World Heritage Site. From that moment and together with the declaration of the Camino de Santiago as a European Cultural Itinerary, the pilgrim flow increased enormously, being able to be currently at its peak with the visit of more than 300,000 pilgrims from all parts of the world, only during the year 2019, for its different routes, being one of the most popular the French Way and the Northern Way.

The number of pilgrims who make the Camino de Santiago increases every year that passes, especially when we find a holy year, that is, how much on July 25, the feast of Santiago Apostle, falls on Sunday.