Discover a quiet path full of landscapes along the Ebro river, which leads to Santiago de Compostela and connects with different routes 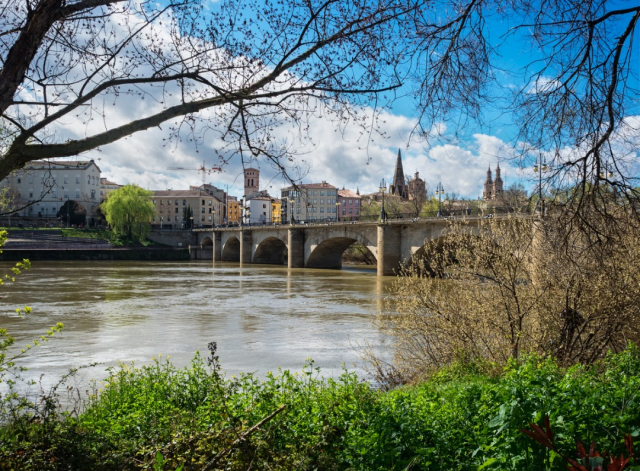 The Camino del Ebro has as its starting point one of the most important rivers in the Iberian Peninsula, the Ebro River. Today it is a pilgrimage Way to Santiago de Compostela to see the remains of the Apostle, which connects with various routes.

If you are looking for a quiet Camino without so many pilgrims, the Camino del Ebro is a good option. During the route you can meditate and enjoy beautiful landscapes full of culture and a large number of monuments.

History of the Camino del Ebro

The origin of its name is given by the Ebro river, which is the main axis of the route. The starting point is in the Ebro Delta, and it continues its journey until reaching Logroño. It connects with the Catalan Way a little before reaching Zaragoza, and from here, it begins to be called both the Catalan Way and the Ebro Way.

Its beginning began in the 12th century, after the Reconquest of Christian territory at the hands of the Muslims. Since then, pilgrimages to Santiago de Compostela began with other Christians from coastal countries such as France and Italy. According to tradition, the Apostle Santiago himself traveled the Camino del Ebro from Tarragona in his apostolic work. Numerous legends speak about this fact, the best known is the one that narrates the appearance of the Virgin Mary in Zaragoza.

The Camino runs along the Ebro river, which is the largest on the peninsula and occupies a third of the Spanish territory. The landscape is very varied, you can enjoy the forests of the pre-coastal mountain range, the Secarrales of the Sierra de Caspe, the natural slopes and much more.

Stages of the Camino del Ebro

The total route of the Camino del Ebro is approximately 440 km that are divided into 17 stages. Throughout them, the pilgrim can visit different autonomous communities: Catalonia, Aragon, Navarra and La Rioja. Together with the Camino de Levante, it is one of the most important routes that begin on the coast of the Mediterranean Sea towards the city of Santiago de Compostela.

During the 400 km that make up the Camino, the landscapes will vary according to the different communities. On the route you will come across numerous tunnels that do not allow the passage of light, so it is advisable to carry a mobile phone to use as a flashlight if necessary.

As for the signage, it is the correct one so as not to get lost. However, pay attention to the correct signs and if necessary ask people in the area. The good signposting on the main roads has nothing to do with that of the Camino del Ebro, so we must pay attention to when choosing the appropriate route.

It is one of the routes with the most moderate slopes to Santiago. For 350 kilometers the road is absolutely flat, and we are talking about a route of 400 kilometers. The remaining route has very affordable slopes, with one exception. On the climb to the En Torner pass, in Sierra de Pàndols, we face a rise of 315 meters in 5 kilometres. We find this slope in the fourth stage of this Way, which runs between Xerta and Gandesa.

On this route we find many enclaves of cultural value from very different times. At the beginning of the route, in Sant Carles de la Ràpita, we cross this neoclassical city with its unfinished New Church. The Amposta Suspended Bridge is an icon of Spanish contemporary architecture, with echoes of the famous Brooklyn Bridge.

In Tortosa we find the castle of La Suda, of Muslim origin, the remains of the medieval walls (from the 14th century), the Gothic cathedral of Santa María, and the church of Sant Domènec, from the Renaissance. The Xerta weir is testimony to Muslim civil architecture, which allowed the continuous flow of water from the Ebro to the canals.

In the Sierra de Pàndols we find the Fontcalda sanctuary, also in neoclassical style. In Gandesa, on the same stage, we can see the Church of the Assumption, with Romanesque elements and a 17th-century restoration. The Mudejar tower of Utebo has been declared a national monument and is a perfect example of this medieval style with Muslim influence. Of course, an icon of this route is the Basilica del Pilar, in Zaragoza, in Baroque style and where Santiago the Virgin Mary appeared to him, as the legend says.