If you visit Asturias during el Camino de Santiago you will be able to taste a lot of meals of their local gastronomy, like the delicious "fabada asturiana". 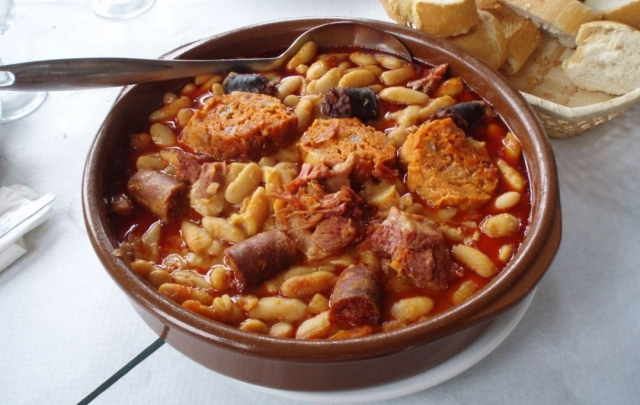 One cannot pass through Asturias, either passing through or doing the Camino de Santiago, without stopping in a good tavern and trying a dish of the famous Asturian fabada. It is a typical recipe of the area for many years, it is estimated that it was already consumed in the sixteenth century. It is a traditional recipe that has nothing to do with more modern ones such as Cachopo.

It is served hot, so it is a very good option for autumn and winter days, like other recipes from its Galician neighbors, such as Galician broth. Asturian fabada is a strong, very nutritious and healthy dish, where Asturian faba (or fabes) is the main ingredient. This variety of faba is white, of a fairly large size and with a creamy texture when cooked.

The dish is completed with other more forceful and protein-rich ingredients, so it is one of the recipes with which we will quickly regain strength after the hard Camino - or to add energy before walking again. It is usually completed with sausages such as chorizo and Asturian blood sausage, and in many cases parts of the pig, such as bacon or ham, are also added. To the ingredients is added half a teaspoon of paprika, more or less, to give it a strong flavor.

Some variations of the fabada depending on the area

The fabada is already a dish not only typical of Asturias, where many competitions are held annually to find out where the best is served, it has already entered the recipe book of Spanish gastronomy. Now it is a meal that is enjoyed in all parts of our country and for all social classes, although originally it was a humble meal and its ingredients show it.

Depending on the area of Asturias where we take it, the fabada may include some changes or different extra ingredients. There are those who put potato pieces next to the beans, in addition to clove onion, which will give it a slightly more intense flavor. Whatever its variety, the truth is that the fabada is a traditional and typical dish very tasty, cooked over low heat for about an hour, which allows a fusion of flavors unmatched.

It is perfect to warm up in winter and charge the energy for the Camino de Santiago.