Making the French Way we find the Old Town of León, is located in the city of León, located on a hill next to the Bernesga and Torío rivers. The old quarter of León has a medieval layout with narrow streets and buildings, irregular streets, balconies, viewpoints, etc.

The monumental neighborhood of León attracts a large number of visitors, attracted by the large number of monuments it has. There you can see the Cathedral of León, the Basilica of San Isidoro, the Walls of León, the Palacio de los Guzmanes, and much more. Also notable are unique spaces in the city, such as Calle Ancha, Plaza Mayor, Plaza del Grano, Plaza de San Martín or Jardín del Cid.

During the 20th century, important rehabilitation works were carried out on buildings and historical structures, the most relevant being the pedestrianization of its entire hull. This measure alleviated traffic and helped ensure the preservation of the Cathedral of León.

Its old town is divided into two areas perfectly separated by the so-called Calle Ancha. The Romantic Quarter, or also called Barrio de Santa María, is located in the north, with a large number of hotel establishments on offer. The Barrio Humedo or Barrio de San Martín, is located in the southern area, being the best choice to taste the tapas of the city and enjoy a nightlife with discos and pubs.

The weather in León 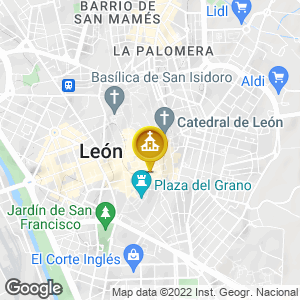