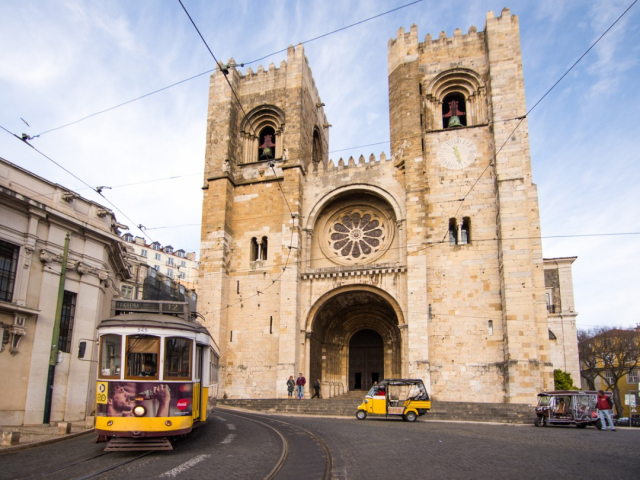 The construction of the Lisbon Cathedral dates back to the 12th century. Back then, Alfonso Henríquez and Gilbert de Hastings, the first bishop of Lisbon, decided to build it on top of an old mosque. The Lisbon Cathedral is a clear Romanesque example and one of the must-sees in the Alfama neighborhood.

This church is one of the few monuments that has survived the large number of earthquakes and fires that have devastated the city. In its origins, the Lisbon Cathedral was known as the Church of Santa María la Mayor, and in the 14th century, it began to act as a cathedral. Although it maintains its Romanesque essence in the external structure of the two towers and in its large rose window, it houses other styles due to its different uses and architectural phases.

Lisbon Cathedral: A church that has braved major earthquakes

Its interior, more sober and dark, is clearly Gothic. We can find in it the remains of San Vicente, the patron saint of the city. Legend has it that two crows accompanied his coffin on its transfer to the city, hence its incorporation into the coat of arms of Lisbon.

The cloister that it has has a style very similar to that of the Jerónimos Monastery. In fact, several excavations carried out in it confirmed its Roman and Arab past. The Lisbon Cathedral as it stands today is a deep restoration that took place in the early 20th century.