Chapel of the Trinity in the Watchtower, image from Wikimedia Commons

The surroundings of the Camino de Santiago have great landscape value, but there is nothing like the views of the sea that we find along the Camino del Norte, and that we can enjoy until we reach Ribadeo. There are some privileged places from which to contemplate the views of the Bay of Biscay, and the Atalaya viewpoint is one of them.

The defensive value of the Watchtower

The height of the Atalaya was an important defensive point in the area, as evidenced by the two cannons that are preserved next to the remains of the old walls. from there You can see the mouth of the Eo River into the Cantabrian Sea, which made it possible to control the entire port and the estuary and serve as a guide point for ships.

The Chapel of the Holy Trinity

In this enclave we find the Chapel of the Trinity, which is the oldest building in Ribadeo. It was built during the repopulation that Fernando II carried out. held in 1182. It was for a long time the parish church, and open councils and guild meetings were held there.

He suffered It has undergone several renovations, so the only thing that remains from the original Gothic style is the main door. It has zig-zag decoration and two heads at the ends, and is crowned by the coat of arms of Ribadeo. This chapel is consecrated to the Holy Trinity, which is reflected in its three altarpieces. The one that stands out the most is a Baroque style altarpiece, with detailed carvings, among which the image of the Trinity stands out.

The environment surrounding this viewpoint has changed. because of the inauguration of the Ribadeo elevator, inaugurated in 2010. This steel and glass elevator bridges the difference in level between the port and the viewpoint, and is fully integrated into its environment. Above all, it greatly facilitates accessibility to the viewpoint. 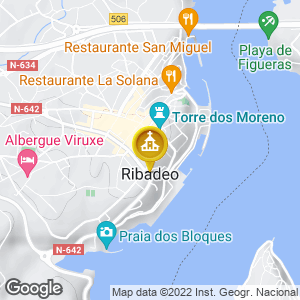