Tower of the Morenos, image from Wikimedia Commons

Whether we start the Camino del Norte in the Basque Country or start from Galicia, Ribadeo is a necessary stop on the way. Although the coastal landscapes that surround this area are impressive, the city itself is not far behind. Ribadeo revived during the 19th and 20th centuries, when emigrants returned home and invested their wealth in new homes. In this context, many indian houses were built, at the forefront of architecture, and the Torre de los Moreno is one of them.

A symbol of Indian progress

This house was ordered to be built by the brothers Pedro and Juan Moreno Ulloa in 1915, upon their return from America. It is a design by the architect Julián García Núñez, who was a disciple of Gaudí, and the engineer Ángel Arbex. These are two very modern personalities in their training, and it is reflected in the building. It has an eclectic architectural style, with modernist influence, so when it was finished, its construction became in the most admired building in Ribadeo.

It has all kinds of decorations that give it a unique aesthetic: tiling, marble, stained glass and glazed ceramics. The tower itself has elements that make it stand out: it is crowned by a dome supported by caryatids (columns in the shape of a woman). The building has three stairways and six patios, as well as wrought iron galleries. It even has an elevator and bathrooms in the house, something very innovative for the time.

In 1997 it was declared the Torre de los Moreno as an Asset of Cultural Interest. However, in a very short time it deteriorated. the building a lot. Now, it is in the restoration phase to return it to the splendor of its inauguration. 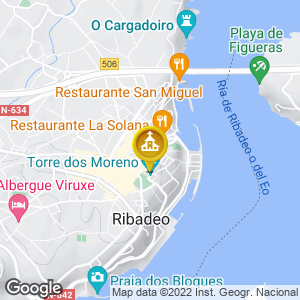