What to see in Roncesvalles 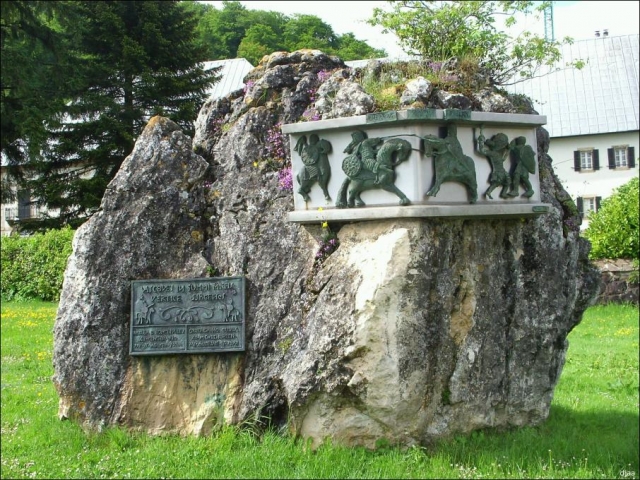 The monumental area of Orreaga-Roncesvalles, situated in the far western side of the Pyrenees stands at the foot of the southern peak of Ibañeta, near to the vast plain of Auritz-Burguete. Its location, in the shelter of the harbour, protects the pilgrim hostel from the harsh climate of this humid mountainous area, which, in winter is normally covered with a thick blanket of snow. The name Roncesvalles has been translated as "the Valley of thorns" and from this interpretation the Basque version “Orreaga” (the place of juniper) is said to proceed.

However, there are other theories, which argue that its origin comes from Erro-Zabal, "The plains of Erro." In either case the successive movement of Gaelic pilgrims has maintained the name in its present form. Upon arrival to the enclave hikers reach a rectangular patio enclosed by houses, where a hospital constructed in the early XIX century, of austere style from that period stands out, currently it functions as a hostel. Previously, there were other buildings dedicated to pilgrims and testimony to this can be seen in the remains located opposite the church of Santa Maria.

With the intention to cater to the needs of pilgrims a hospital was established in the twelfth century in the former port of Ibañeta. Later, an albergue-hospital and the Collegiate church of Roncesvalles were constructed, run by a community of canons and destined to care for and protect the pilgrims. During the middle Ages new buildings were constructed and the collegiate gained importance due to its extensive power and the growing number of walkers.

This Collegiate Church of Santa Maria, next to the albergue, stands out among the collection of buildings that form the centre. Its church, of French Gothic style, was built in the late XII and early XIII centuries, and has large windows decorated with modern glass. Inside visitors can see the main altar with the image of Santa Maria of Orreaga/Roncesvalles, a beautiful piece of art, wooden and of Gothic style, coated with silver and decorated with a gold trim. Other monuments include a cloister that dates back to the XVII century and replaced the Gothic one which collapsed in 1600 after heavy snow (during winter months it is common to see vast amounts of snow in this area) and the chapel of San Augustine.

In the centre of this ancient Gothic chapter house lies the tomb of Sancho VII el Fuerte (the strong), King of Navarre between 1194 and 1234. On the slab stone that covers his tomb there is a statue that reflects the imposing height of the monarch, 2.25 meters tall. At the front of the chapel, behind a gate, the chains that surrounded the tent of the caliph Muhammad An-Nasir are displayed, known by his nickname Miramamolín during the Battle of Las Navas de Tolosa.

This battle took place on the 16th of July in 1212 in the surrounding area of the Jean town of Santa Elena. A Christian allied army formed largely by the Spanish troops of Alfonso VIII from Castile, the troops of Sancho VII from Navarra and the troops of Pedro II from Aragon against the numerically superior army of the Almohad caliph Muhammad An-Nasir.

The Christian side achieved an important victory and the battle was a high point for the Reconquista, also it was the beginning of the end of a Muslim presence in the Iberian Peninsula. During the fighting the troops of Sancho the Strong reached the tent of Muhammad An-Nasir, cutting the chains that protected him.   The windows of the chapel offer a vision of this battle.

The facade of the church of Santa Maria is attached to the house of the Beneficiaries (the beneficiaries were the clergymen who occupied a lower position than the canons in the hierarchy of the church. Their homes, built in the second half of the eighteenth century, comprised of a long horizontal block) and can be reached by a overpass, known as Portal de los peregrinos (the Portal of the pilgrims), founded in 1726.

A small tunnel, through which the square of Santa Maria is accessed and the old pilgrim road descends from Ibañeta, there is a medieval gateway in the form of an arch that marks the entrance to the old prison.   Next to the cloister of the collegiate is the Priory House, built in the XIX century. Inside the building the council offices of Roncesvalles are located, formed by a group of secular canons, in 1983 they replaced the last community.

The Library and Museum occupy a building juxtaposed to the Priory House, constructed in the form of a horizontal block. The archive and library is only open to specialists, comprising of more than 15,000 volumes relating to all types of materials, although the works on theological, philosophical and ecclesiastical history stand out. There are volumes in several languages ​​such as Hebrew, Greek, Latin, Basque and even Chinese. Some of the most interesting editions, like the XIV century codex La Pretiosa, are exhibited in the Museum of the Collegiate.

The museum also keeps works of great interest including sculptures, paintings and gold and silver objects, as well as furniture, rugs, coins and books of great importance. Perhaps the most famous piece of all is the Ajedrez de Carlomagno (Chessboard of Charlemagne), a relic from the XIV century of silver gild and enamel, named so for its checkerboard arrangement and which, according to legend belonged to the French emperor.

Charlemagne would have been playing on it while Roldán, close to death, called or sounded the horn he was carrying around his neck.   All these passages refer to the Battle of Roncesvalles, which took place on the 15th of August in 778 in an unknown place. Some place the battle in the plains of Espinal and Burguete, others to the Cize ports, some to the winding road of Luzaide / Valcarlos that runs between France and Spain and, according to the Song of Roland the confrontation took place in Roncesvalles. The attack occurred when the army of Charlemagne, on their return from an expedition beyond the borders of the kingdom, were attacked and defeated by the Basques. The bulk of the army crossed the Pyrenees via Ibañeta without a problem, camping at sunset near Luzaide / Valcarlos. Roland, Earl of Brittany, led the rear guards, which were practically annihilated.

This historical fact was transformed three centuries later in the Chanson de Roland, the epic poem that magnifies the history until the end. The attackers were converted into 400,000 Saracens and Roland himself assumed the role of Charlemagne's nephew. The conflict, according to the Song-was produced after the treachery of Ganelon, Roland's stepfather. Charlemagne, following this betrayal, decided to send Ganelon to a dangerous embassy before the pagan monarch of Zaragoza Marsile.

This enraged him and to plot his revenge and he made an agreement with Marsile to destroy the rear guard of the Carolingian army led by Roland and the best of the Frankish nobility. The rear troops of the army were attacked by hordes of Muslims. Roldán did not seek help until all was lost. As the end drew near he blew his Oliphant, the horn he was carrying around his neck and, immediately afterwards, tried to destroy his Durandal sword (which had, among other relics, the tooth of San Pedro embedded in the handle) against a rock so it would not fall into pagan hands.

But it was the rock that broke and he died. Charlemagne, who at that time would have been playing chess, heard the distant call and came to his aid but it is too late. After avenging the death of his faithful men and annihilating the army of Marsil, he chose to bury the warriors and carried the body of Roland and other fighters, such as Oliveros and the Archbishop of Turpín.

Ganelon was tried and sentenced to death. The centuries have located some passages of the epic song in the vicinity of the Collegiate. Thus, and always according to the novel, on the rock that was split and placed in the chapel of the Holy Spirit, here they also house the graves of the countless Frankish warriors. The Collegiate treasures memories of the main characters, like the drumsticks of Roldán and Oliveros, and their horns, Turpíns shoes and of course the chessboard.

Next to the chessboard in the museum there are other works of value such as the relic ‘’de las espinas’’ (of the thorns), a gilded silver piece that formed part of the heritage from the death of Francisco from Navarra, and the so called emerald of Miramamolín, a jewel that according to tradition, King Sancho VII the Strong snatched from the Moorish king in the battle of the Naves de Tolosa. Among the paintings La Sagrada Familia stands out, by Luis de Morales, and the Triptych of the Crucifixion, a table from the XVI century of Bosch influence.

The oldest building of those still preserved is the chapel of the Holy Spirit (capilla del Espíritu Santo), the silo de Charlemagne (XII century) of Romanesque style. It can be assumed that its origin stems from the burial of French fighters killed in the Battle of Roncesvalles. It is a funeral temple, a place in which mass was officiated for pilgrims who died in the hospital. Buried elsewhere, after a time remains were deposited in the ossuary situated under the exempt chapel. In 1977 a grave of 8.86 by 8.60 meters was discovered, containing about two feet of materials, among which they found about 300 human skulls. These remains can still be seen today from a trapdoor.

Next to the chapel is the church of Santiago, a small Gothic church built in the XIII century. It was used as a parish until the XVIII century. It remained without worship for a long period of time before being restored by Florencio Ansoleaga in the XX century. Ansoleaga incorporated the legendary bell that guided the pilgrims to the chapel and, that was situated on the hill of Ibañeta. Inside there is a figure of Santiago the Apostle.

On every August 15th the chapel recites the Song of Roldán and other works relating to the battle. The pilgrims can visit the collection of monuments both by reservation, if visiting in large groups and without an appointment. Admission includes entry to the cloister and chapter house as well as a tour of the museum, the silo of Charlemagne and the chapel of Santiago. The entrance for pilgrims (with the credential) is 3,70 euros.

The Collegiate Church (948760000) remains open from 08.00 to 20.30 hours except during the hours of worship. For more information and reservations: 948790480 or auriaorreaga@gmail.com / http://roncesvallesorreaga.blogspot.com.es. In terms of leisure, and gastronomy, pilgrims can also visit the cheese and dairy farm Roncesvalles-Orreaga (948760115), open Monday to Friday from 08.00 to 15.30 hours. Here they produce different types of cheese including sheep cheese, conventional and organic.

Points of interest of Roncesvalles (1) 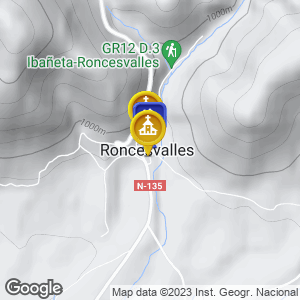