Garlic soup is a typical recipe of the Castilian community and has been cooked since ancient times. 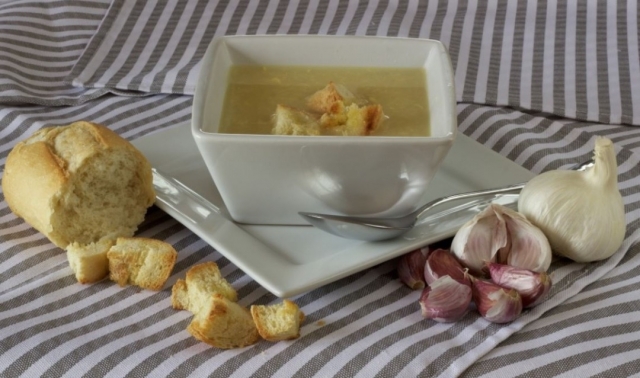 One of the things that most impress the pilgrims who have done the Camino de Santiago, is the great gastronomic variety it offers. In the different pilgrimage routes, we can discover new flavors and textures while tasting the typical dishes of each area. A clear of this, is famous garlic soup, a typical recipe of the Castilian community and that has been cooked since ancient times.

This dish so popular in Spain, was one of the typical recipes of the humble people during lunch, since to make it the remains of the bread of the previous day were used together with garlic, paprika and hot water. The combination of these ingredients is perfect to regain strength after hours of activity, as well as being easily digestible.

The simplicity of garlic soup has made it, in some areas of Spain, become one of the typical dishes during Lent. This is because, being a recipe that does not include meat, is suitable for religious customs, and that its composition combines with the sobriety of this celebration.

Variants to garlic soup in Spain and Portugal

Garlic soup is known in every corner of the country and that has triggered each region to have its own version of this well-known recipe. For example, in Andalusia, it is made with the same ingredients but also includes a cooking cauliflower. Also, the Andalusian garlic soup does not contain paprika and is usually thick, unlike most versions. On the other hand, the Aragonese garlic soup carries eggs and croutons, while in the version of La Rioja it has pieces of tomato and peppers.

This recipe, already known internationally, also has its Portuguese version. In the Alentejo region, located in the center-south of Portugal, we can find this variable of the Castilian recipe under the name of "açorda alentejana". However, this version differs from the original, by using coriander instead of paprika.