This easy stage involves sections of great beauty. As a main attraction there is Augasantas. This southern itinerary of the Silver Way joins with that of the route from the north in As Pereiras, close to Ourense. This section of the route has little of interest.

The Jacobean journey through Allariz, a town declared of historic-artistic interest, departs from the albergue itself, situated within the grounds of the ancient and magnificent monastery of Santa Clara, with its imposing baroque façade. The route passes the main square, the street of rúa Vilanova and the river Arnoia. After the milestone 128,330 pilgrims reach a dangerous junction with the N-525. From here the route passes the industrial estate of Chorente, the OU-0101, the motorway A-52 and the town of Roiriz, via the OU-0101, which is taken on the left, to later take a turn off to the right to arrive at a stone cross and a fountain. Of the three paths that depart from the stone cross pilgrims should take the one on the right, on an earthy path in slight descent, which borders a rustic fence. This track leads to Rubiás, San Breixo de Espiñeros, passes an outdoor washing area with a fountain, crosses Turzás, another covered washing area and crosses the OU-0101.

Throughout this part of the journey pilgrims should take care as the signs for a walking route can cause confusion. A sign (without Jacobean symbols) provides directions to turn left for a hiking route. Pilgrims should ignore this sign and continue on the same track.   At a junction with the OU-0102 walkers are faced with two options: The official Way heads towards Vila. Afterwards it descends towards Taboadela and passes through the towns of Armea, Abeledo and Pereiras, where it connects to the route from Xunqueira de Ambía.

The two routes of the Camino together until Ourense

With the two routes now united, the Way continues along the OU-0102. Leaving on the right hand side a petrol station with a shop to soon after pass below the railway line. Along the same route walkers reach A Castellana, here they will find services and a resting area for pilgrims, with a covered seating area. Arriving, a little later at a junction. On the right hand side there is a service station that opens 24 hours. However, pilgrims should continue to the left, bidding farewell to the industrial estate of San Cibrao das Viñas, to reach a new roundabout. From here hikers have to turn right and continue along the OU-0514 in the direction of Reboredo, also with services.

Pilgrims will have to reach the peak of Cumial, one of the few climbs on this stage. The summit is descended via the OU-0105. Later walkers face one of the most dangerous points on the Silver Route as they are faced with having to cross the railway tracks in order to reach the pretty town of Seixalbo, with numerous services. The long journey to the entrance  All that remains of the days journey is the entry to Ourense. First pilgrims will have to pass down the long street of Verea Real. From here they will pass a car dealership to reach the OU-0105, the streets Rúa Cumial and avenida de Zamora. At the roundabout, with a fountain in the middle, those walkers wishing to go to the albergue (situated 1.5 kilometres away) should continue ahead on Rúa Nosa Señora da Saínza. Those not staying at this albergue should continue ahead on the avenida de Zamora.

A section of the route, on a path of large stones on the stretch that connects the hamlets of Rubías and San Breixo de Espiñeiros is likely to cause problems for cyclist. They always have the option of continuing the route from Allariz to Santa Mariña on the OU-0101 road.

On the descent from Armea to Abeledo they should also take extra care, especially after periods of heavy rain. The remainder of the journey to Ourense can be passed quickly. 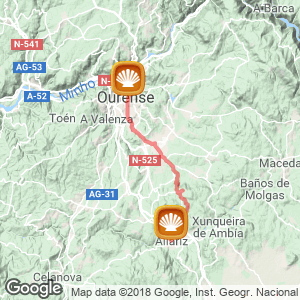