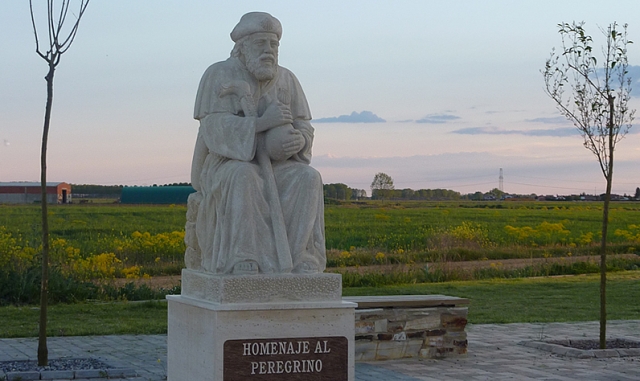 In this step the walkers faces a very boring stage, which most will attempt to do quickly despite its extensive length in kilometers. Those who prefer to divide it into two have the good option finishing in Mansilla de las Mulas, aplesant town with all the necessary services. In this way, and by splitting the step into two, you will reach Leon early and can thus enjoy the city in all its splendure.

The itinerary continues for more than 20 kilometers on a flat path, parallel to the asphalt, escorted by fields of grain. In the absence of shade pilgrims are advised to start the day at dawn in the summer and to wear protection against the harsh sun. Towards the last part of the day the ground changes, leaving the asphalt it continues along gravel tracks, at this stage there are a number of confusing crossroads.

In the last eight kilometers a number of industrial warehouses make the route less attractive and pilgrims begin to crave the arrival of León. The day involves a second stage longer than that of the first, without directly passing through towns, this disadvantage is made up by the previous step which passed through enclaves with services of all kinds.

This long stage, which will test the patience and endurance of the walkers, in many ways it resembles the first part of the previous day. Having left behind the main central street El Burgo Ranero (352 kilometers to Santiago) the pilgrim returns to an earthy path that runs parallel to the road on its left side and advances straight on and along level ground across the moors of León. On the journey you find successive crossroads and diverse yet simple recreational areas, like those in the last two kilometers, an attempt to liven up the monotonous march along this never ending cereal terrain.

The route to Reliegos (13 km) is the second longest stretch without towns along the route, second to that which runs between Carrión de los Condes and Calzadilla de la Cueza, for which it is recommendable to take water, food and a hat. After leaving on the left a school of light air craft planes, reaching, a little later the picnic area Villamarco with tables, benches and a secondary path that leads to the centre. Despite not being exactly on the Jacobean route and consequently to arrive you have to travel an extra 1.4 kilometers, it is a possibility for those in an emergency situation. Here they will find a bar, a shop and a rural tourist house.

The walker returns to the path and after a bend, crosses via a tunnel the railway line. The road from here widens slightly and passes some streams to later arrive at the resting area of Reliegos (30 kilometers to León), where there is shade within the enclave itself. Some traditional Bodegas and the public hostel welcome travellers before reaching the centre, which has all the necessary facilities to meet the visitor’s needs. In a shop where you can purchase basic food items, you will find one of the most picturesque bars on the pilgrim route, its façade, entirely decorated in blue, will not go unnoticed by any pilgrim.

There are many that come upon recommendation, others by chance or those whom watched the film The way, by Martin Sheen and thus decided that they would also like to stop in at this bar (La Torre). The waiter Sinin, also known as Evis, as a permenant tribute to the king of rock, appears exhausted, yet happy at the constant attention of the pilgrims. Inside the bar and on its walls you can read a number of messages and slogans, written by pilgrims, these literary memoirs have remained since 2004. Neither the passing of time nor the waiter have managed or wanted to erase them. Here all walkers are welcomed with a smile, and a beer in hand to be immediately offered an affordable menu, snack or sandwich. It is all about relaxing and having a good time.

Something achieved. After this stop, which is not strictly on the pilgrimage route, the walker retraces a little until the Calle Real, from which the journey continues parallel to the road but just before rejoining the path will encounter a park with a statue that the council of Santas Martas (that to which Reliegos belongs) chose to pay homage to.

A famous saying, popular rhyme in the area, reminds the walker of the distance they still have to travel along the eternal tree lined path, 6 kilometers. “La legua bien medida, de Reliegos a Mansilla”. Just one leg between Reliegos and Mansilla. 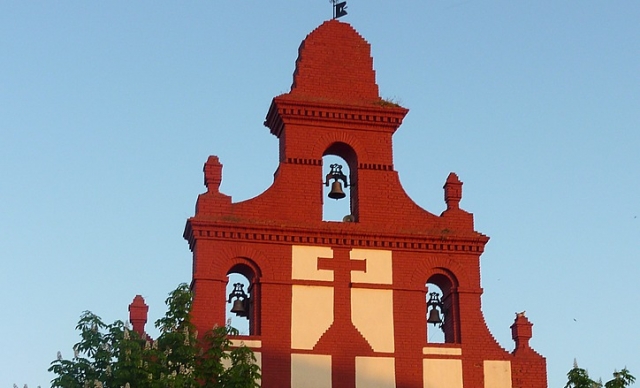 After an easy walk among the toasted fields of wheat, and already with the next location on the horizon, the pilgrim passes a picnic area with a fountain and an area of shade to finally say goodbye, now almost at the gates of the plesant Mansilla de las Mulas. Following nearly 5 kilometers since the last stop, and to access the centre situated in the valley of the river Esla, the pilgrim has to cross the N-602 on a viaduct and pass the canal Porma.

This stop (19.1 kilometers to León) can be a welcoming end to the stage, offering all services to pilgrims. Bars, restaurants and accommodation accompany the pilgrim along this urban itinerary, finally reached after passing the castle gates (Puerta del Castillo), one of the four entrances points of this ancient walled enclave (XII century), where you will also find a monument to pilgrims.

The town, which had a great Jacobean past and was renowned as the economic center, came to have four hospitals for pilgrims. Currently it has two hostels and several hotel establishments. Before leaving this place, and although it is outside the walls of the town, pilgrims are advised to visit the striking chapel Virgen de Gracia, (Our Lady of Grace), painted in the colour ocher and finished with red brick. This monument is without a doubt, one of the photographed of the enclave.

To leave the center, cross the river Esla over a bridge of eight arches. Immediately after crossing, and leaving on the right the areas campsite, you rejoin the camino on the left of the N-601, accompanied by fields of corn the route passes a the diversion to the monostary Santa María de Sandoval, of monastic Cistercian architecture from the XII century, declared a Historic-Artistic Monument but all that remains are its ruins. After nearly 5 kilometers and after leaving a on the right a petrol station with a shop Villamoros de Mansilla, a small center that is not directly on the route but that pilgrims can cross as an alternative to avoid a dangerous stretch on the hard shoulder of the main road.

Formerly this town was known as Villamoros del Camino because it is here the traditional path is also the main street of the village. Once again on the N-601 you pass a bakery and leave on the right side a sign indicating the archaeological site of the ancient Roman city of Lancia.

A parallel path then leads to the next stop Puente Villarente (12.7 kilometers to León), the centre is accessed by a footbridge over the river Porma, recently built.

The name of the town comes from its bridge, which consists of 17 arches of different eras, and that has been described as "enorme" (huge) by the author of Codex Calixtino. Tradition recalls how in this place there had been a good hospital founded in the XVI century by the Archdeacon of Triacastela. The old house, still conserved has been converted into a restaurant (La Casona) that offers meals to the pilgrims walking the Camino. The building was dedicated to Nuestra Señora la Blanca, on establishing the hospital rules it was made obligatory to have a donkey on site in order to transfer sick and unable pilgrims to León.

Crossing the centre via the national road, along which you pass hostels and various catering establishments, which offer to satisfy the hunger and thirst of passing pilgrims. At the exit, and always along a long straight, the route widens and the walker passes a pharmacy, several workshops and various bank offices. 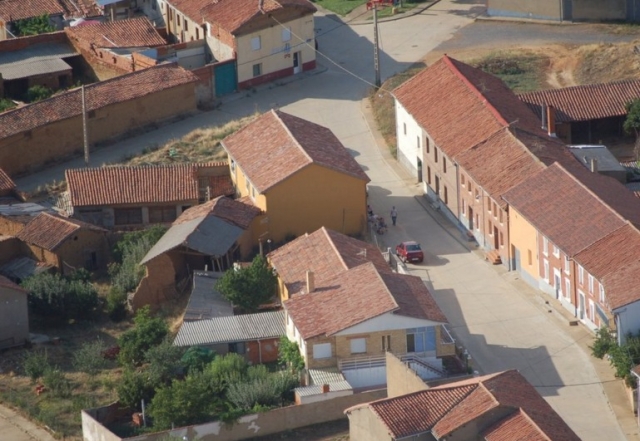 It is recommendable to walk on the right side because, just above a bulletin board, the route takes this direction along a detour that stands out from the asphalt. Continuing on a gravel track that passes different junctions with power lines until crossing a stream, and immediately afterwards, avoid the A-60 (León- Valladolid motorway) through a lower tunnel. At this point there is a good covered service area, with a fountain and a foot bath, located just before the short steep slope where the entrance to Arcahueja is reached. Here hikers will find basic services and a shelter.

The route continues ahead, leaving on the right hand side a sports park. Along a gravel track with several holes, the bumpy route imposes extra punishment to the tired walkers legs. The route reaches the resting area Valdelafuente and deviates towards its centre, it is not worth taking this variation, with the exception of those in need of assistance or a chemist. Leaving on the right a cemetery you arrive at a crossroads, here you should turn left and head towards the industrial estate of León situated next to the N-601.

The route continues along a trail that leads to a footbridge to cross over the ringroad and that allows pilgrims glance down over the area of Portillo from this high vantage point the hiker can contemplate the riverside of Torío and residential area of Leon. The pilgrims come and Puente Castro a neighborhood just before the city of León separated from it by the river itself.

This enclave in no way resembles the famous Jewish quarter or mosque that was in the Middle Ages. In the church of San Pedro it is possible to visit the Interpretation Centre and reception for pilgrims, with information on the pilgrimage route in the area (open Monday to Friday from 09.00 to 15.00 hours; 987 260 777). The pilgrim has just one last stage to cover the last stretch in this ungrateful stage to be rewarded later with all the attractions of Leon. But to get to the center will still have to cross the Torío river by a footbridge parallel to the bridge and continue along Avenida Alcalde Miguel Castañon up to the Plaza de Santa Ana.

Continuing on calle Barahona, to turn towards calle Escurial, where they will find one of the Carbajalas nuns hostels, to then continue to the Plaza Mayor. The Gothic cathedral towers serve as a beacon to guide the weary pilgrims.  Vía Trajana or Calzada de los peregrinos route Those pilgrims who opted to continue to Mansilla along this route face a new and frightening and overwhelming day. The moor and the loneliness which will accompany them for over more than 20 kilometers from Calzadilla de los Hermanos.

After a short stretch on asphalt that leads to a detour to El Burgo Ranero, the pilgrim will not step foot on roads or come across any more centers until the final stage. The path takes dimensions not yet known to the pilgrims, who will face winding paths which at times are on the old Roman road, and that gradually approaches the railway line. Along paths over the streams, that after heavy rain can become a problem, the path livens and progresses to a plateau and nears Mansilla. Despite being a lesser known route it is well signposted.

Cyclists will not have problems in completing this step along the marked route, which with the exception of certain stretches, as with the previous Arcahueja path, can become more rugged and rocky. 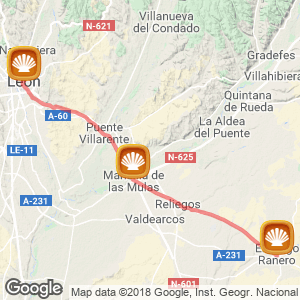