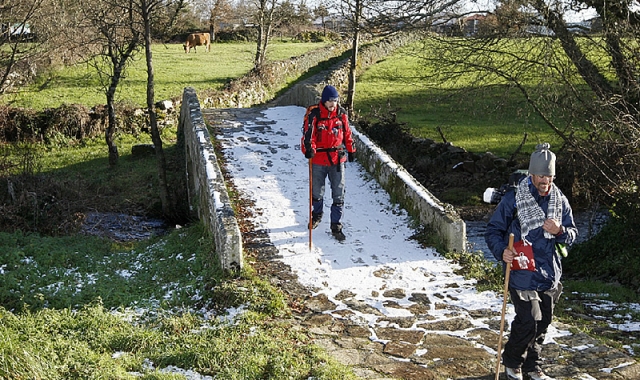 The Camino of Santiago says goodbye to Portomarín along the Avenue of Chantada. After crossing a footbridge over the river Torres (tributary of the river Miño), the ascent of Mount San Antonio begins, in the shelter of vegetation until reaching a large brick factory situated at the foot of the LU-633. From here the Jacobean route continues for 8 km along a path very close and parallel to the road, on both sides, with the added inconvenience entailed in crossing the it. The distinctive aroma informs travellers that the road passes in front of some agricultural buildings before reaching Toxibo, a small village, with a striking barn that stands out for its noble appearance. The trail continues on deceivingly false flat ground. In some sections small shrubs were planted between the asphalt in an attempt to provide the pilgrims with some privacy, but with little success.

The ground, of earth and soil can become muddy in periods of heavy rain. After crossing a picnic area with a fountain, walkers are rewarded with a brief rest from the traffic surrounding Gonzar. In Gonzar stands the Church of Santa Maria, closed for much of the year. In this centre, and aside from the public and private hostel (Casa Garcia), walkers will find the bar El Descanso del Peregrino, the first establishment on the stage where walkers have the possibility to regain strength. Through the mountains of Ligonde The next enclave is Castromaior. Castromaior owes its name to castro, meaning fort, (a fortified hill settlement of pre-Roman origin) one of the most interesting cultural visits. The fort, despite not enjoying the fame of other archaeological sites, is one of the best preserved. To visit, it is necessary to deviate a few meters from the Camino. The church of Gonzar, of Romanesque style, originates from XII. In Castromaior, Casa Maruja offers the possibility to stay overnight at an affordable price. The bar O Castro provides breakfasts, sandwiches and a menu of the day. On abandoning this small hamlet the walkers re-join the path parallel to the LU-633 until reaching the centre of Hospital, which, as the name suggests, once housed a hospital for pilgrims. The remains of this ancient medical centre have not been preserved, although its origins have been recorded in historical documents. Hospital, with large cobblestoned areas, has a small public albergue. Immediately next-door is the restaurant Mesón Labrador.

On leaving Hospital pilgrims should cross a bridge that passes over the N-640, turn left and cross the road to a paved, narrow track on an unfavourable slope, that leads to Vendas de Narón, a historical town on the Camino, which in medieval times was known as Sala Regina. At the entrance to Vendas de Narón the walkers will find Casa Molar (Bar, hostel and rooms). The hostel O Cruzeiro and the bar of the same ownership Plaza. Without leaving the track, the Camino continues in ascent to reach the top of Serra do Ligonde, which wisely rests between the rivers Miño and Ulla, taking advantage of the abundance of water that flows in this area. From its peak, the pilgrim can enjoy a stunning panoramic view. According to the Códice Calixtino, "these mountains were swarmed by prostitutes to lure pilgrims".

A generous descent leads the hikers to A Previsa, in the council of Monterroso, and Os Lameiros, one of the highlights of the stage. Os Lameiros has one of the most original, famous and photographed stone crosses of Galicia. Erected in 1670, its uniqueness lies in the fact that it is double sided. On one side the crucifixion of Christ is represented. The other side depicts an image of the Virgin of Sorrows. At the base, on one side, a skull and bones on the opposite side, a ladder, and some nails symbols of the Deposition. Ligonde is the most populated centre on this stage (80 inhabitants). Its noble air is still apparent in its cobble stone pavements, also, in this small town famous monarchs, such as Carlos I and Felipe II were offered accommodation. In this enclave pilgrims will find the private hostel, Fuente del Peregrino and, just at the exit, the public albergue Escuela de Ligonde, with a stone facade. At this point the Camino reaches one of the most technically challenging parts of the stage, as it departs on a very steep path, taken to the left. To avoid this difficult stretch it is possible to continue along the road, a few meters later the two routes unit. After crossing a small creek and going up a slope, they enter Airexe (6,4 kilómetros to Palas).

On the right is Casa Mariluz, with a privileged terrace to enjoy a drink before arriving in Pallas. Airexe boasts historic monuments, such as a medieval sarcophagus (stone coffin), the church of Santiago with tombs and Roman remains, a stone cross and a rectory. In the elevated part of the enclave they will find the public hostel Ligonde, the private albergue Eirexe (also with rooms) and the Inn and Cafe Waldemar. After turning left at a junction there is a small descent leading to an outdoor washing area, from here the track steepens a few meters until reaching the descent to Portos, the first establishment in Palas de Rei. The church of Vilar de Donas In A Paso de Formiga, decorated with giant sculptures of ants, the pilgrims are offered breakfast (open daily at 7.30 except in winter), steaks, main meals and sandwiches. All washed down with the best local wines. They can also eat at the hostel Casa A Calzada, which offers a daily menu at 9 euros. A little further ahead, a sign informs of a deviation to Vilar de Donas.

Although the Camino of Santiago does not run directly to the monastic Church of Vilar de Donas, its evolution is completely tied to it. In 1931 it became recognized as a National Monument. It was one of the main operational centres for the Knights of the Order of Santiago, upon their death they were buried at this site. In the summer this monument offers free, guided tours. In low season it remains closed, however Jesus, the verger, is happy to open the temple to all those wishing to visit. To contact him: 982153833/669544009, call either number for details or enquiries. Do not forget to ask about the exceptional Gothic paintings. The pilgrims continue along the road until reaching Lestedo, notable for its rectory, situated on the right.

Originally constructed as a hospital for pilgrims and as a place of residency for the priests of the parish, today it functions as a magnificent rural house and even has its own library. A little further ahead, the church, surrounded by the cemetery, boasts a beautiful stone cross. Just next to the church there is a small football pitch. In A Brea, a restaurant at the foot of the Camino advises pilgrims to turn left and continue along a path leading to the left side of the N-547. Upon reaching the top of Rosario, on clear days, the hikers will enjoy first views of Pico Sacro, a nearby mountain, announcing the close proximity of the Galician capital. It is the last hamlet passed on the Camino de Santiago before arriving in Palas is that of Rosario. It is believed that its name derives from the prayers of pilgrims on reaching this point, in gratitude for their fortune throughout the Camino and as a sign of joy for the ever-nearing Santiago. Towards the end of the journey the paved path of the village and gravel track leads walkers directly to Os Chacotes.

The initial slope to the brick factory can result very challenging, although at this point the pilgrims legs are usually accustomed. A large percentage of this stage is on cement roads with hardly any vehicles. The rest of the journey, with few exceptions, is on dirt tracks, sometimes rather narrow (the main discomfort is trying to overtake the pilgrims on foot). Now arriving in Os Chacotes, the cobble stone ground in A Brea will cause those feeling saddle sore to suffer further pain. 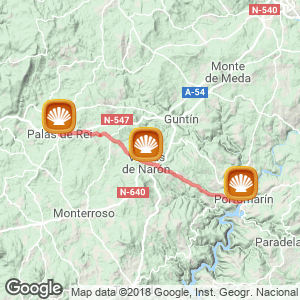