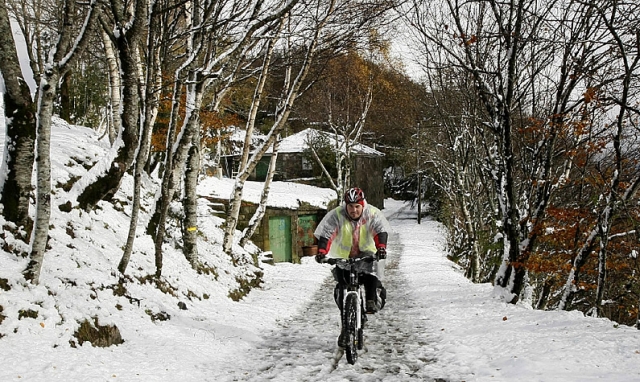 After passing a number of small hamlets, most of which have services, on a path parallel to the N-VI, the route returns to the mountains. The road enters the wonderful and magical Galicia through its main door. O Cebreiro is one of those places that, remains etched in the memory of pilgrims. The ascent, provided it is done without the stress of time, is not too complicated. The distance can be somewhat overwhelming for those pilgrims arriving with little strength, given that the climb is reserved for the end. They will always have the option to stop at one of the establishments in the surrounding villages. They will not be short of options.

Now at the other side of the river, the last homes of Villafranca are seen in the distance (185 km to Santiago), and the pavements have now disappeared. The pilgrim continues along the same road. Just at the exit there are small sections at the side of the road where the footsteps of pilgrims have created a natural walkway along the asphalt, but in this first stage there is an inevitable feeling of insecurity caused by having to walk face to face with the cars. Amid the powerful, green mountains, the route meets the A-6, at a higher altitude. At this point, the pilgrim advances on an uncomfortable track, always on the left side of this old road (there is no room at the right, and also an added risk of landslides). Luckily, since the opening of this motorway, it has been very quiet with hardly any vehicles. The walk, on the bank of the river Valcarce, enters small and tranquil locations. The terrain is also quite flat until reaching Vega de Valcarce.

The first small town on route is Pereje (180 kilometres to O Cebreiro). In its day it had a hospital and a prison for pilgrims. Pilgrims should tread carefully when resuming the path because there is no pedestrian crossing. After continuing for a kilometre and a half, always accompanied by the Valcarce River, the walker comes to the resting area Trabadelo (176 kilometres to O Cebreiro), situated 500 meters before the entrance to the hamlet. On leaving this town with a tradition for wood, a track offers some respite from the tiresome path.

After another passage under the motorway, at which walkers should turn left (at points it is indicated by stones on the ground in the shape of an arrow), from here they return to the left side of the A-6. Nearly two kilometres further ahead is one of the biggest black spots of the route. The path disappears dangerously and exactly at one of the busiest motorway exits. The service station Valcarce, in A Portela, is a reference point for travellers leaving or arriving to Galicia on wheels. The cafe is open 24 hours a day. It has a restaurant and a three-star hotel. There is a small supermarket selling typical products from Bierzo and in the grounds of the car park there are normally traders selling seasonal fruits. At the other side of the road is the narrow village of A Portela (171 kilometres to O Cebreiro). During the feudal period, the nobles of the area demanded a toll payment (passing tax) to all those travellers wishing to enter Galicia. It is believed that the town's name derives from the name of the tax, abolished in the early eighteenth century by Alfonso VI.

The residents of this small town erected a statue in honour of Santiago the apostle with a plaque indicating the distances to Santiago and Roncesvalles. On leaving the walker passes another service station, more humble than the previous one. After a stretch walking on the left side of the N-VI, although now without a walkway, pilgrims reach a junction where they turn left towards Ambasmestas (170 kilometres to O Cebreiro). It is increasingly notorious that the Camino of Santiago gains altitude, but almost always, from the beginning of the day, on deceivingly false flat terrain. Vega de Valcárcel (166 kilometres to O Cebreiro) is the best choice for purchasing supplies before facing the climb. This location is the most important due to its size. It has a large number of services, from a chemist to supermarket, as well as bakeries and cash machines. 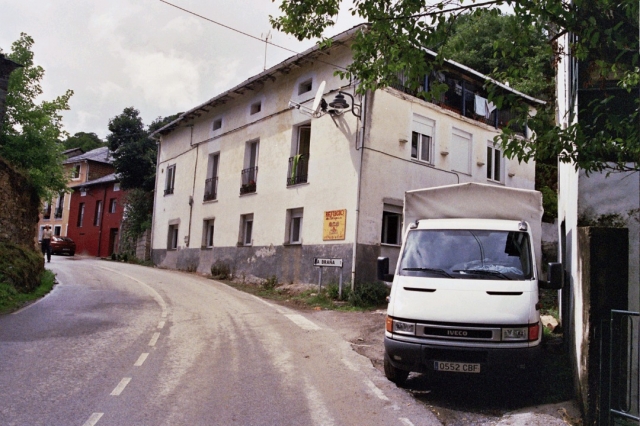 In Ruitelán, the terrace of the bar Omega at the entrance of the hamlet, is a good place to take a break before starting the ascent. Another good option is the Bar Rosa. In Ruitelán hikers will also find Albergue de peregrinos pequeño Potala. The chapel of San Froilán was constructed over the cave where the saint took refuge during his life as a hermit. Froilán decided to leave his spiritual retreat. Full of doubts, he placed hot coals in his mouth, and on not burning himself, set out to preach. Froilan died in the year 900 as the bishop of Leon. He is currently the patron saint of Lugo.

Going up From Ruitelán to Las Herrerías the slope appears, it is not overly steep, although it does increases considerably as continued. In the company of beautiful scenery on the left, full of fishermen in search of trout, the hiker reaches, after crossing the Roman bridge this pastoral Camino town, which owes its name to four blacksmiths who worked with iron and other metals. The Jacobean route crosses the elongated and tranquil village along the calle Camino de Santiago, where walkers will find all necessary services, a pleasant walk. After passing a fountain they reach a fork in the road that leads either to Molino Verde, or La Faba. It is this last option, always on flat and paved terrain, which they should choose.

From here they reach the neighbourhood of the hospital, a continuation of the previous centre, which takes its name from an ancient hospital founded in 1178 for English pilgrims. After crossing a wooden bridge and leaving behind the sign for Herrerías the itinerary turns sharply to the left, where the first ramps on uneven ground begin, on the asphalt and which the pilgrims must share with the few road vehicles circulating in the area. The slope is constant for almost a kilometre until arriving at a junction, which invites (with indications on a milestone) walkers to leave the road and cyclists to continue.

Now on the path that leads to the beautiful corredoira (a stone-cobbled lane used to lead cattle to pasture), the slope gives respite to walkers until crossing the stream of Refoxo. Having reached this point, and after another left turn, a steep, zigzag climb leads them among chestnut and oak trees on a shady path until the next stop. The rolling hills are not too high, although the climb is constant and on strong but uneven ground with an abundance of stones. The ascent-moves from 760 meters in altitude at the deviation point to 921 meters in La Faba-despite being hard (the most demanding of the day) is not as bad as many claim, especially if done in favourable weather conditions. The only real difficulty, besides the backpack, is the accumulated tiredness, and in winter, the lack of services and frost on the ground.

After glimpsing of a small medieval bridge that remains almost hidden among the vegetation, the path approaches La Faba (161 kilometres to O Cebreiro), a small centre on a hill, it conserves good mountain architecture and here pilgrims can recuperate their strength. The enclave has a pretty church, from the XVI and XVIII centuries, with Baroque altarpieces and a bronze sculpture of Santiago the Pilgrim. In this temple the pastor of O Cebreiro gives mass at 20.00 hours, an ecumenical prayer attended by pilgrims of different religions, such as Catholics, Protestants, Buddhists and Muslims. Also next to the basilica, on its right side, there are a number of pilgrim graves (residents of the village were buried on the left).

History recalls, on a plaque, that here a group of German hikers died from the plague. On leaving this place walkers should observe the ground, its large stone slabs give faith to an ancient Roman road-if snowfall is not present, they can appreciate the carvings on the surface of the rock, on looking up the Atlantic forest of the area can be seen and in the distance, the summit. In this stretch of mountainous landscape, in which there is an abundance of grassland, the trees practically disappear. The absence of shade can punish the pilgrims on hot days but, in exchange, the beautiful and clear views, increases the sensation of reaching the final goal, this all leads to a more favourable perception of the slope.

The climb begins to ease as it nears Laguna de Castilla (less than 2 kilometres to Cebreiro), the last village of Castile and Leon on the Way. The small enclave, situated at 1164 meters, and in which hikers will find typical mountain buildings, a bar and next door a hostel (La Escuela) in peak season it opens early and serves breakfast, lunch and dinner, it also offers several accessories for pilgrims, such as ponchos. In the case that these facilities are closed (in winter), walkers in need of refreshment can find a drinks machine in front of the bar. In this village there are also three-square granaries and a fountain. At the exit of the centre, a fork in the road can be confusing, pilgrims need to pay attention to the milestone and continue on the path to the left. The trail, not excessively steep, continues along the hillside of a mountain and gradually gains altitude. 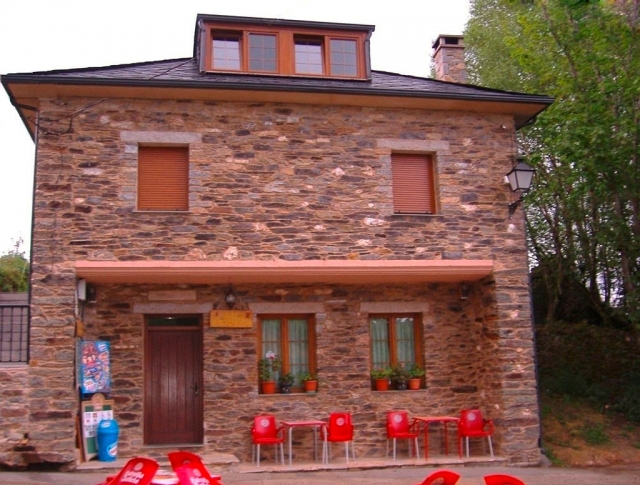 Seven hundred meters after Laguna, another milestone (with the inscription Os Santos) leads to the entrance of Galicia and specifies that 152.5 kilometres remain until the goal. At this place there was once a chapel marking the boundary between Leon and Lugo. From now and until reaching Santiago there are sign panels every 500 meters (except for the variant of the route that links Triacastela with Sarria via Samos) in a sort of countdown to encourage pilgrims. Four hundred meters later the pilgrimage path bids goodbye to the Castilla and León with a stone monolith to mark the entry into Galicia. Now just one last effort remains to crown the stage and access the long awaited Cebreiro. After the final kilometre, the Camino passes in front of an abandoned stone house and reaches a pilgrim monument, known as the monument to a "Bagpiper", which recalls a medieval legend of a German hiker who was lost between the mountains and managed to reach this spot guided by the sound of a bagpipe. At the top the views are spectacular. After the obligatory pictures and passing in front of a stone cross, the itinerary approaches the enclave from the back of the church Santa María Real do Cebreiro.

Caution should be taken at the exit from Perexe and on arrival to the service station A Portela. The crossroads are extremely dangerous. From A Portela the path is abandoned to share the road with the few cars that pass by the old N-VI. The first part of the stage is comfortable, but from Ruitelán the terrain is falsely flat, and the exit from Herrerías is on steep ramps. At the exit of Herrerías, a number of signs recommend cyclists to follow the road until O Cebreiro. It does make the journey slightly longer but the ground is good.  The original Camino to O Cebreiro is only recommended for highly experienced cyclists, given that some slopes are very steep and there are sections where the ground is difficult. Only a combination of strength and expertise will stop the pilgrim from having to dismount and push the bike. 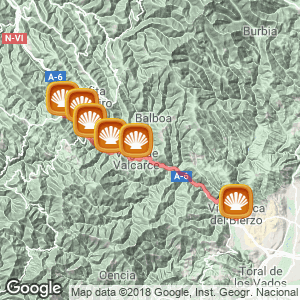